Capitalism came into this world the same way in which every other system has been brought about: Through families. Yes, I know . . . you’re probably thinking that I’m full of shit, that I’m making things up, that I’m falling into gross exaggeration, since, you may ask, how could I account for systems such as communism or anarchism in my claim? And that’s more than fair. But you may probably want to remember that, in this case, communism and anarchism, as well as anything in-between (either half-baked or nuanced, as happens with socialism or anarcho-syndicalism) mainly rely (and has relied) on comradeship as a new form of brotherhood (or sisterhood), and that it was upon this bond that the Nation, the Homeland, father-or-motherland, was made as the greatest family of them all. So, yes, that’s how I can go on with my claim. Still, to be fair, capitalism, lest we forget, was a direct heir of the monarchic line that breakages like communism (etc.), or even those supposed by the two original revolutions (the American and the French), set to complete. Where these revolutions broke with monarchic lineages, capitalism only integrated them into a strange sort of synthesis that also included the despotic slogans that rose during their aftermath (i.e., Robespierre’s reign of terror and Napoleon’s complex emperorship). So, resuming, capitalism came into this world through family ties and, more importantly, it thrived in family feuds.

It is important then to bear in mind that for capitalism the people, the “we,” has never ceased to be important — it has only been displaced into different positions within the coordinates of Churchillian (and/or Orwellian) egalitarianism: We are all equal, but some are more equal than others. This is the phrase that an unlikely CEO throws to his employees as We the People: The Market Basket Effect opens: “We are all equal.” Yet some are more equal than others, at least in terms of capital accumulation.

This slogan, however, is very close to the original people’s revolution that started what we know today as modern capitalism, the one that “overthrew” monarchies only to diversify them. This is the kind of capitalism, bereft of its original sin, for which conservatives across the world (and across America, North America, the US) howl to a more and more capricious moon: The good capitalism that puts people over profits. The original American dream that has turned into a bizarre hallucination.

We the People: The Market Basket Effect spans for three generations over a family business: The original dream that all foreigners dreamt about before they crossed land and ocean to get to America. This all too familiar trip starts in Greece, from where Athanasios Demoulas migrated and landed in the US of A, specifically in what was then a small but blooming town, Lowell, Massachusetts. Demoulas worked hard, as only the dream demands, and made a name for himself; he opened a family shop, a butchery specialized in lamb, that operated under two main tenets: 1) offering good prices to their customers; 2) help them through tough times. This last principle almost sent the shop to bankruptcy during the Great Depression, but that was not enough to discourage Demoulas. He persevered, and so did his shop. This is the portrait of the original corporation, the one that starts as a big family enterprise, moved by the initiative of an immigrant entrepreneur with very little to lose and just the world to win. Thus we see the prototype of the American dreamer, fighting his way from the bottom-up, the original king of capitalism, Kapitalism, who fought, formed, and founded his kingdom in his shop. The kingdom that shall extend more and more, as the second generation takes over the family.

Enter the two sons, Mike and George, who transformed the shop into a supermarket and then this latter into a chain that would catapult the name to the heights first ambitioned by the king. And just then, tragedy breaks in, or rather, an unfortunate event unchains a tragedy . . . in the Shakespearean sense: A family feud for full control over the fief. With the sudden demise of George, it is Mike who inherits jurisdiction and responsibilities over the family (business, but also over his brother’s widow and offspring). We never fully get to know whether Mike did take advantage of his position to take away from their nephews’ part of the fortune, what we do know is that when a legal battle is set by George’s eldest (dead before his time in a fatal car accident), and then finished by his younger brother (Arthur S.), the judge rules for George’s side and leaves a mark on Mike’s good name. And so it starts, a bitter battle for the rule of the fiefdom that will result in the events that made this story worthy of its own feature.

But before we get there, let’s just keep in mind the kind of ruler that Mike was, particularly after his brother’s passing. Mike was the kind of manager who could create a business model that was both profitable and sustainable. Yet his model included full control over his estate, which meant a despotic rule that, although grew significantly the business, also garnered him the enmity of his brother’s sons. The family patriarch was a less liked stepfather. These tainted bloodlines will hence spark the drama that is inaccurately portrayed by one of the many talkingheads of the film as a Greek tragedy (succumbing to the facile analogy). It is some kind of tragedy, but much more resembling the Elizabethan dramas of families battling over power, a faithful reflection of the war between the Lancaster and the Yorks, eternalized with roses but probably best remembered for its thorns. Shakespeare was, perhaps in this sense, the one who best explored not only this war (with masterpieces such as Richard III) but also its genealogical three, all the way back to Rome — the cradle of all empires gone rogue.

The kind of Shakespearean tragedy we see ensue in We the People: The Market Basket Effect is the one that is at the heart of most of the brilliant playwright’s works: Betrayal in its truest form. This is the betrayal that comes from the hands of those who are closest to you. In this case, the one that was at first depicted as the victim, Arthur S., is soon turned into the traitor who does everything in his control to sack his cousin, Arthur T., out of the company. There’s a caveat, a big one, nonetheless. It turns out that Arthur T. is the CEO who spoke about equality at the beginning of the film. He is beloved by his employees, who feel as part of the family and as partakers of the huge success in which their boss has turned the company: Making Market Basket the to-go-place for groceries in almost every town running from New Hampshire to Maine. Arthur T., alas, inherited his father’s family feuds along with his business model: People over profits, which has at its core its employees, feeling valued and needed in the kingdom (though rarely welcomed in the castle), yet dictating tyrannically over the board and shareholders . . . leaving all the dirty clothes to launder in the castle. And you should see the minutes stemming from their meetings. That was one revolted castle. An autocrat at home yet a true democrat at his job, this was one old-fashioned CEO.

And how much did people miss this kind of boss, almost as much as they miss the kings of times forgotten. When Arthur T. is finally sacked by his cousin we see the most unique kind of protest raised: Every employee, most shoppers and several suppliers went to strike, asking for their former CEO. That was their only demand — and what a difficult one this was, for it corroded down to the marrow of a bitter battle of blood, a warfare of microscopic detail, fought at the arena of DNA and misty pasts. Yet winning much to last. As unprecedented the movement was, a bottom-up strike (amplified and quickly spread through the well-used tool of social media), it showed (particularly by having customers refusing to buy there even if that meant spending more, something almost unheard of) that the power of the buyer is stronger than any board, than any corporation (for which can afford to lose almost 3 million dollars a day).

But this is one of the film’s greatest flaws: It blindly falls in love with its subject. Despite the narrative structure, that’s framed almost as though it were going straight to TV (you can almost feel the ads coming at certain points), it is what the documentary overlooks, and that unwittingly unmasks, that makes it shallow. It is, as the We in its title, infatuated by the king. We only hear about how awesome he is from wearisome interviews with many of Arthur T.’s loyal underlings, but the king only appears at a rather awkward interview performed at a parking lot, with the CEO on his way to, maybe, some important meeting.

And what We the People: The Market Basket Effect unmasks, if unwittingly, is how much corporations embody a new form of monarchy, to which extent they are bottom-up-made kingdoms and their business models nothing more than models of governance. As in monarchic regimes, the best you can aspire to is to getting a good king, a wise tyrant, which is what Arthur T. seems to be: A fatherly provider who rewards those who give him what he asks. It is true that the business model that we see is way more benign than the ones that currently dominate the market, governed by boards that center on short-term goals and fast profit in the detriment of their employees and customers. So old school business models, you know, family businesses with long-term, sustainable profit, are very much appreciated. Yet this hardly makes up for what that means, when we look at it coldly — at the winter of our own discontent.

But when looked with director Tommy Reid’s eyes (already notable for this kind of romances with his protagonists), everything is awesome: The king is reinstated; the kingdom to him returned; the “we” restored to its original state — yet another family tie. It is, in his lens, the perfect union between the head and the hand, work and labor forever in a field that’s been put to rest, joined as one in the common goal of perpetuating their mark in a market that is not for “us” to share, but for “us” to rule and govern. That’s what a good king does. That’s what the good king is. That’s what our good king gives. And if by blood we’re not related, in the one we will to spill, shed or sweat we shall always be together. Let’s rejoice to this happy day. And may God serve the king!

'Movie Review: We the People: The Market Basket Effect (2016)' has no comments 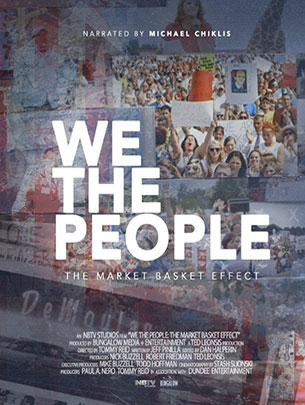