The year is 1990. The place is a rural Minnesota town and a man there reports to the police station because his daughter has accused him of raping her. John Gray (David Dencik, “The Homesman”) is polite, cooperative, and remorseful, yet he claims to have no memory of the crime. He insists his daughter is a good girl who would never lie to anyone for any reason, and would never make up such a terrible story, so he insists — he must be guilty. Detective Bruce Kenner (Ethan Hawke, “Maggie’s Plan”) and psychoanalyst Kenneth Raines (David Thewlis, “The Theory of Everything”) take on the case, and lead Gray through a regression therapy session, hoping to bring his blocked memories to the surface.

Shockingly, Gray reveals that he didn’t act alone, that family friend and police officer George Nesbitt (Aaron Ashmore, “Killjoys” TV series) was also involved. Kenner arrests Nesbitt and seeks out victim Angela Gray (Emma Watson, “The Perks of Being a Wallflower”) for confirmation. A timid and petrified Angela has taken refuge at her church, and reveals that the people who attacked her were performing a Satanic ritual; she describes being stalked and harassed, just as her mother was before she died. Stunned, Kenner and Raines talk to Angela’s grandmother and estranged brother, trying to find out who’s involved and how many potential victims there may be. As the investigation continues, Kenner becomes obsessed with helping Angela, and begins having incredibly realistic nightmares about intruders in his home, strangers following him, and mysterious figures whispering to him that it’s all just a dream.

Written and directed by Alejandro Amenábar, Regression is a crime-thriller with a very basic crime, and very few thrills. Purportedly based on a true story, the film hinges on whether Satanic cults truly existed in the 90s and were covertly terrorizing individuals in small towns across America. There is certainly no shortage of movies about Satanists in the horror genre, and, as a result, there’s nothing surprising about the plot of this film. Events designed to be shocking are anticlimactic and occasionally comical; home invasions committed by people in black robes and comforting coos from elderly women smack more of haphazard “Rosemary’s Baby” references than an effective true-story suspense film.

As for the parties involved, Ethan Hawke’s Bruce Kenner changes demeanor far too often, and each one is hyperbolic — he’s gruffly cynical, then he’s aggressively investigating the case, then he’s sweetly tender toward the girl he’s trying to help, then he’s seeing paranoia-induced shadows. As Angela, Emma Watson seems held back, an actress who wants to go bigger with her character but is trying to keep things low-key and subdued. She’s inauthentic and unfortunately, you mistrust her character immediately. Supporting characters are little more than cheap window-dressing — the fiercely protective Reverend Beaumont (Lothaire Bluteau, “Vikings” TV series), damaged brother Roy (Devon Bostick, “The Art of the Steal”), strangely out-of-the-loop Police Chief Cleveland (Peter MacNeill, “Rookie Blue”), and melancholy grandmother Rose (Dale Dickey, “The Possession of Michael King”) are shallow and underdeveloped, present mainly to give Kenner something to be angry about.

It’s frustrating to have a new film by Amenábar fall so flat, especially since his earlier films, like 2001’s “The Others” and 2004’s “The Sea Inside” are so beautifully crafted and remain with you long after viewing. Regression, with its flat characters, unsatisfyingly predictable ending, and overplayed framework is a regression for him and a memory better left forgotten for us. 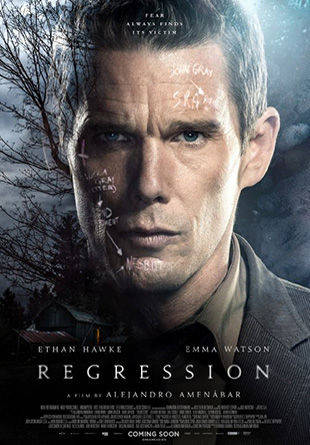