The digital age is slickly skewered on the sharp blade of a knife that cuts a clean swath of revenge through a wealthy family’s existence in sick satirist Yorgos Lanthimos’ genre-blurring The Killing of a Sacred Deer. Lanthimos buries his satirical observations deep and then brushes away select portions of the surface to reveal grim glimpses of the darkly comic commentary underneath.

Materialism that trumps moralism meets the social media-influenced/enhanced desire to advertise one’s uniqueness in this tale of a London-based surgeon (Colin Farrell, “The Beguiled”) finding himself forced to choose between murdering a family member or watching his wife and two children die slowly through an orchestrated four-step process that involves paralysis and bleeding from the eyes.

It’s a lose-lose situation for Farrell’s Steven, especially since Lanthimos shuts the door completely on any opportunity to outthink or outplay adolescent antagonist and eerie soul Martin (Barry Keoghan, “’71”). There’s no more explanation for Martin’s ability to accomplish his cruel goal than there is a possible escape from the chilling fate, so the screws of tension are wrenched tightly with an immeasurable sense of inevitability.

Less inevitable is how immaculately and impeccably Lanthimos manages to render the dark material in hauntingly humorous tones. It’s not easy to make a comedy about a father fighting to protect his family by killing one of them, let alone a comedy that successfully incites actual laughter at nearly every juncture, but Lanthimos attends so austerely to the absurd that nervous laughter becomes the only logical response.

Lanthimos leans on his cast to illuminate the oddness on display and everyone is up to the rigid task of realizing the director’s morosely mechanized world. Farrell’s previous collaboration with Lanthimos in “The Lobster” serves him well here, once again impressively investing in droll deadpanning, and Nicole Kidman (“Lion”) has worked with such an extensive roster of different directors that it’s no surprise she can leap onto the right wavelength immediately, but Keoghan is a relative newcomer and his performance here is frighteningly nuanced, masterfully plucking the strings of ambiguity.

One of the best performances in The Killing of a Sacred Deer is limited to just two scenes and delivered by Alicia Silverstone (“Butter”), who expertly and eerily captures the robotic quality that appears to define everyone trapped within Lanthimos’ sphere of comical contempt. As she interacts with Farrell inside her cozy living room, her lips twitch as if she’s struggling to process the algorithm required to speak, lending the movie an appropriate “Stepford Wives”-ian vibe in the moment.

The mechanical aspect of the acting is felt throughout all the performances to varying degrees and it adds as much to the movie’s strange tone as it does to the theme of man/machine melding. When Steven’s daughter Kim (Raffey Cassidy, “Tomorrowland”) falls victim to Martin’s nefarious plan and finds herself confined to a hospital bed, she tells her grieving mother that the paralysis isn’t so bad as long as you have everything you need within reach.

It’s a darkly delirious line clearly meant to poke hyperbole-fueled fun at the binge-watching generation. Couch potatoes aren’t exactly a new concept, so perhaps Lanthimos has long been harboring ill will towards anyone and everyone for whom the television remote was invented. But The Killing of a Sacred Deer isn’t a diatribe aimed angrily at laziness in general. Lanthimos is keenly homed in on the sins of the modern digital era, constantly questioning whether an online culture of over-sharing and carefully cultivated identities is resulting in humans automating themselves.

Overlaying these observations with a strangely stiff style and peppering scenes with nonsensical conversations about fancy watches and body hair further illuminates the oddball lampooning that Lanthimos is aiming for. While the story’s surface suggests it’s a tragedy, the tone suggests otherwise. The movie doesn’t even concern itself with the theme of moral corruption that generally accompanies revenge-themed narratives. It’s all purely distilled dark comedy laden with simmering symbolism.

The plot speaks of family loss, but Lanthimos has his eye firmly focused on what we’re losing to our relationship with media and devices and a general sense of materialism. It makes one wonder what the director would say about someone eventually kicking back and watching this on Netflix. The fun thing about Lanthimos is that, while he dabbles darkly in dreariness, he deploys his devilish denunciations with a slightly veiled smirk.

It would be ridiculous for a filmmaker to ask an audience to sit and stare at a screen for two hours while said filmmaker criticizes people for being viewing zombies enslaved by digital technology, unless the filmmaker does so with a full understanding of the ridiculousness. With The Killing of a Sacred Deer Lanthimos pokes, prods, and pontificates in equal measure. He makes biting the hand that feeds him a delectable act, devouring with derision.

'Movie Review: The Killing of a Sacred Deer (2017)' has no comments 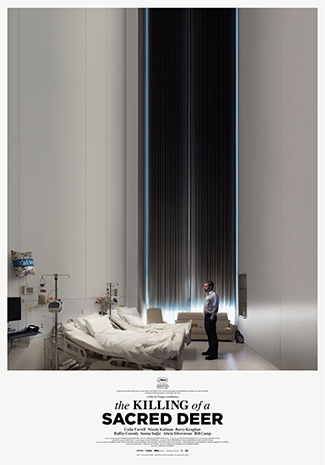