1947, and Sheriff Proctor (Danny Goldring, “The Dark Knight”) and Deputy Waterhouse (Ted Levine, “Bleed for This”) are busy dumping two bodies in a lake. After the deed is done, Waterhouse fires Proctor without firing a shot. 30 years later, an elderly Waterhouse is sheriff. His granddaughter, Jacqueline “Jake” Mather (Samantha Isler, “Captain Fantastic”), visits the fateful lake with her brother. He leaps in and — spoiler alert — never returns to the surface.

After an atmospheric and arresting opening, the movie, Dig Two Graves, enters its grim, ‘70s-set groove. The Mather family is shattered by grief. Everyone is coping in a different way. Mom and dad are planning another child: A replacement for Sean. Granddad, hardened by a life of war and loss and guilt, is accustomed to bereavement’s unique burden. He’s the only one Jake can really talk to. But it’s not enough for Jake. When she’s visited by three gypsy brothers, led by the fearsome Wyeth (Troy Ruptash, “A Marine Story”), she’s given an offer she cannot refuse: Sacrifice a life, the occult-inclined siblings say, and we can bring your brother back.

Waterhouse is lousy with sadness and regret and a bad case of hemorrhoids. This is Levine doing some of his best work. With subtlety and rugged grace, he plays a part that Jeff Bridges may have caricatured. More like Robert Duvall in his delivery, he’s able to switch between geniality and ferocity with utter conviction. Meanwhile Proctor, equally well-played by Goldring, is a magnificent monster, playing the moonshine-swilling has-been who wears his guilt like the world’s biggest chip on his shoulder. But we already knew those actors were good. It’s Isler who’s the revelation. For one so young to portray a teenager shaped by cataclysmic loss and yearning — whilst avoiding mawkishness — is virtually a miracle.

“There are no cowards,” Waterhouse says, “there are no heroes.” He’s talking about him and Proctor. Two men so similar — bound by a crime they’ll never outrun — yet a gulf apart in how they live out their days. Both tough and both wearing their masculinity in different ways. Proctor sees male strength as a means to power; Waterhouse sees it as a means to wisdom. Proctor is embittered; Waterhouse, philosophical. These contrasting approaches feed into their relationships with their respective grandchildren.

Through confident application of his craft, feature debutant Hunter Adams manages to overcome some undeniable genre clichés and budget limitations to produce a deeply atmospheric onion-peeler of a thriller with a palpable sense of place. Eric Maddison’s cinematography captures the beautiful desolation of the Illinois wilderness, in the same way Michael McDonough did the haunted Ozarks in 2010’s “Winter’s Bone.” Credit also goes to Scott D. Hanson for his excellent editing. The transitions between time periods, as we gradually learn the source of the old-timers’ guilt, is seamless, giving us two parallel stories of equal dramatic weight.

Impressively and satisfyingly, Dig Two Graves retains its ambiguity to the end, never giving us a clear answer as to the veracity of Wyeth’s “hocus pocus” claims. Where a lesser film may have resorted to a twist, retroactively flooding the film with new and unearned meaning, Adams prioritizes a satisfying emotional payoff. The impact lies in what the final confrontations mean to the characters, and thus in the myriad meanings we draw for ourselves.

Broken down into all its carefully constructed LEGO pieces, there’s nothing exactly new in Dig Two Graves. But in its remarkably competent, confident whole, it’s a very solid and compelling piece of filmmaking. It’s a smart, serious, soulful thriller which, while never providing the really fetching revelation that its build-up promises, also never resorts to cheapness or schlock. Remember the name: Hunter Adams is a talent to watch. 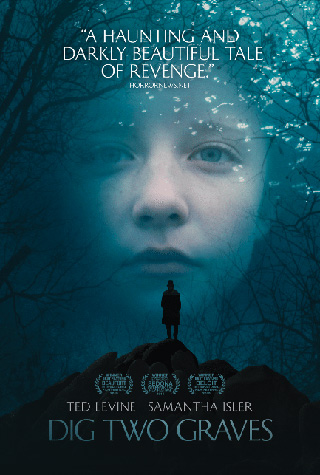