The word that will be most often used to describe Across the River, a movie about two ex-lovers spending a few hours together on the streets of London, is small. We often use the word small these days to describe movies that don’t involve superheroes or CGI, what Siskel & Ebert used to refer to as Hollywood’s “homerun mentality.” Hollywood doesn’t make small films anymore, though perhaps the success of “Moonlight” may change that. So we turn to the UK for this “small” film, Across the River, which is low on plot but full of life, and radically different than most movies you will see this year. And while it takes some time to find its feet, and doesn’t quite work as a complete movie, it’s an interesting film that’s often emotionally resonant.

In its rigorous focus on two people as they walk, talk, and connect emotionally, in what feels like real time, Across the River recalls Richard Linklater’s “Before Trilogy.” It doesn’t nearly reach the level of any of those movies, but Across the River is an intimate movie that works on the audience slowly, revealing the emotional life of the two characters in gestures, reactions, and awkward pauses.

The two characters, and ex-lovers, are Emma (Elizabeth Healey, “Trap for Cinderella”), an overworked career woman, and Ryan (Keir Charles, “Man Up”), an uninspired artist, who meet by chance one afternoon on the banks of the Thames. The plot revolves mostly around Emma trying to pick up a cake in time for her daughter’s birthday and Ryan playing guide as the two are thwarted by the challenges of public transportation in London rush hour. As they walk together along the river, Emma and Ryan delve into their romantic past and all the wounds, disappointments, and unresolved emotions they’re forced to confront.

Healey and Charles share the screen, often in intense close-up, for the movie’s total 90 minute running time, and it’s their believable and understated chemistry — familiar and awkward at once — that is the film’s real success. Both actors share a screenwriting credit with the director, Warren B. Malone, as the filmmaker and actors, in true collaborative sense, went into production without a traditional script, instead improvising dialogue and action on-camera within real locations. Improvisation is often dull to watch, but it can occasionally lead performers to moments of truth that feel more authentic than the manufactured emotions of scripted scenes. Across the River, more often than not, feels shapeless, but it occasionally does succeed in capturing some beautiful and moving moments between the two leads that feels earned and not prepared. The movie works best when it lingers on Healey and Charles as they steal a glance at one another. It is less interesting when it rushes the characters into forced situations, like when they discover a playground and “relive” their childhood together on the swings.

Across the River definitely reflects the challenges of its experimental approach. The filmmakers employed multiple hand-held cameras in order to capture all those intimate moments quickly in real locations, which they had little control over. That guerrilla approach adds to the authenticity of the movie and also adds urgency to scenes that keeps the movie moving along, but it creates some continuity and lighting problems, too, that would have been difficult to avoid. Ultimately, the movie needed a stronger overall structure and more defined scenes to allow the dramatic beats to come through the improvised dialogue more clearly (akin to Mike Leigh, another British filmmaker, who shoots fully realized scripts built through improvisation in the rehearsal process). But Across the River still manages to be moving, charming, and often funny, and even sometimes riveting in its simplicity and honesty.

Across the River is the type of film that travels the festival circuit, winning a few awards and some praise, but rarely finds a larger audience. It isn’t a great movie, but it deserves to find an audience, and is certainly worth a viewing if you can find it playing near you. 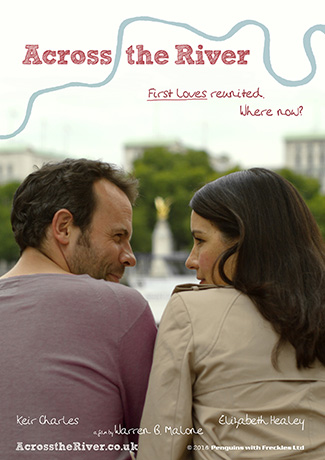