Some beautiful aerial photography of Napa Valley is the strongest asset of Decanted, a leisurely paced, reverent look at a handful of winemakers in that famous region of California. If you’re interested in how, or why, a person would start a winery in this competitive industry, then you may find something more to like in this documentary, though truthfully, I can’t recall much of what happened or who did what and why they chose to do it.

Director Nick Kovacic (director of “Brewmore,” a craft beer documentary) is most interested in the visual and rhythmic connection between the winemakers, the vineyards, and the intricacies of the craft than anything else. At times, Decanted is beautiful to look at, and it definitely made me long for a wine-tasting trip through the sun-drenched Napa Valley. It also left me wanting even a hint of dramatic conflict, however, which is sorely missing from this rambling and overlong documentary film.

At a brief running time of 78 minutes, Decanted nevertheless drags by, due to not only a lack of dramatic focus but also because of a lack of interesting characters. I had a difficult time following which character was associated with which vineyard (although one that I recall was Italics Winery) or what each character was adding to the dramatic arc of the story. Perhaps the Internet has destroyed my attention span, but the film just didn’t hook me in to these people or their world.

The documentary opens with the film’s most fascinating character, Heidi Barrett, describing her love affair with winemaking and the Napa Valley region, as she pilots a helicopter across the golden landscape. This character doesn’t make another appearance until two-thirds of the movie has passed by, then briefly again near the end of the film. If only the filmmakers had focused their attentions more on this character, I think they may have found a more compelling and dynamic story to tell. As it is, Decanted feels like a half-hour PBS food/travel program, edited into a feature-length film. There’s just not enough there in the story or characters to justify it’s length.

On the plus side, the gorgeous outdoor cinematography filmed in cinéma vérité style by Nate Pesce and Matthew Riggieri is a pleasure to see, and there is a fine score by Caleb Stine that accompanies it. There’s also plenty of wine pouring, sniffing, swirling and spitting, if you need a low-key fix between weekend wine-tastings. Beyond that though, like many wines on the racks today, Decanted is far from memorable. 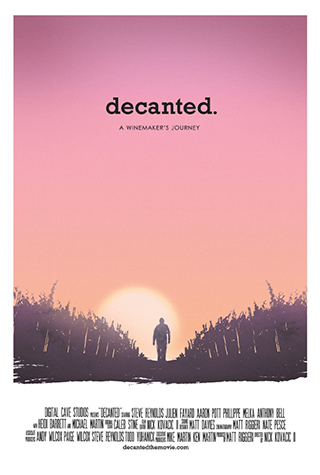