The on-the-road murder mystery, Road to the Well, is quite an imaginative and intriguing vehicle from the creative mind of writer-producer-director Jon Cvack. Although this titillating indie does not have the bombastic aura of the cookie-cutter goosebump whodunits so prevalent in mainstream Hollywood thrillers today, the intimate and small-scale production still resonates effectively with the potency of its designated atmospheric scope and climatic direction.

Cvack’s debut feature shows definite promise and persistence in its off-kilter build-up to the rising tension, occasional off-the-cuff humor and refined eccentricities of the flawed characterizations. Sure, Road to the Well meanders off course at times, but the ultimate payoff is worth the wait as Cvack peppers his quirky, bloody buddy movie with attention-getting impish dialogue, crisp and fetching cinematography and neo-noir flourishes.

There could have been some costly obstacles with Cvack going to the well too often with the familiar ingredients of bonded friendships, betrayals, infidelity, professional malaise, shady loose-minded women, cockeyed personalities and traveling corpses, however, he skillfully manages to blend these revolving elements into a quilted blanket of mischievousness, adventure and adversity. And while it has its hiccups in execution and suspense, it is by no means a devastating knock on this low-key pulsating piece and its workman-like thrills and chills.

The audience is introduced to office drone Frank (Laurence Fuller, “The Black Russian”), a former PhD candidate reduced to corporate drudgery in the workplace. Frank is asked by his boss Tom (Tim Martin Gleason, “Pass the Light”) to transfer north for a 6-month stint at another venue. The reluctant Frank accepts the assignment, but then personal humiliation knocks at his unsuspecting door — it turns out that Frank’s live-in girlfriend was cheating with the sleazy Tom. Feeling understandably disillusioned, Frank soon hooks up with his visiting old best friend Jack (Micah Parker, “Lola Versus”) as they both decide to hang out and catch up on old times.

Frank wants to drown his sorrows like there is no tomorrow, but the roguish Jack has plans to snap his dejected pal out of his funk. Jack challenges Frank to approach Ruby (Rosalie McIntire, “Blood Lines”), a mysteriously attractive woman at the bar. Predictably, the hormonal sparks fly between the heavily buzzed Frank and Ruby and they have their heated moment in Frank’s car. Soon though, the passionate hook-up turns deadly when Ruby is killed in the middle of the backseat love-making session. Moments later Frank wakes up dazed and confused while lying in his underwear next to his vehicle. Of course within moments a stunned Frank will discover Ruby’s stabbed lifeless body inside his trunk . . . and the murder weapon tucked in his draws to boot.

In an obvious panic, a bewildered Frank calls Jack and fills him in on night’s activities which ended with his discovering the grizzly remains of the chick he was previously pleasuring. At this point Jack comes clean — he knew Ruby and hired her sexual services to make Frank “feel good” and forget about his romantic woes with his ex-girlfriend. Thus, both men are connected to the dead prostitute and must come up with a solution to distance themselves away from this now dead cutie pie’s carcass. Whatever will the doomed duo do at this point?

Since Frank has to journey up the California coastline for work anyway, the troubled tandem make the risky decision to put Ruby’s chopped up body (stuffed in a luggage bag) in the car trunk and escort it to a far destination so that they can secretly bury the corpse. Naturally, Jack and Frank make a few pit-stops along the way that find them reuniting with criminal contacts, not to mention an overnight visit with mutual friend Chris (Barak Hardley, “The Bronze”) and his fiancée, Trudy (Caitlin Gallogly, “The Doll Web Series” TV series).

In fact, Chris’s remote cabin will play an interesting part in the scheme of things as Frank and Jack want to make his property (unbeknownst to Chris) the final resting place for the deteriorating, odious stiff. Unfortunately, an intrusive and gruff military man named Dale (Marshall R. Teague, “Divorce Texas Style”) figures into the mix and delays the agenda of the guys. Things become increasingly unsettling as the demented Dale hands the desperate friends an ultimatum that proves toxic to all concerned.

Road to the Well has its healthy share of twists and turns that are every bit as tricky in maneuvering as the California Sierra roadways the protagonists drive in search of ditching the banged-up body. Both Fuller’s Frank and Parker’s Jack make for an ideal pair of beleaguered body-snatchers as they roam aimlessly looking to erase an unpredictable death. The erratic, but strong supporting characters, and the film’s lyrical music score all mesh tightly in this taut tale of treachery. This backwoods story of death, defiance and deception is organically riveting and should be considered a terrorizing treasure as it will undoubtedly be hidden in the shadows of the more promoted and frivolous dramas with half the heart and havoc. 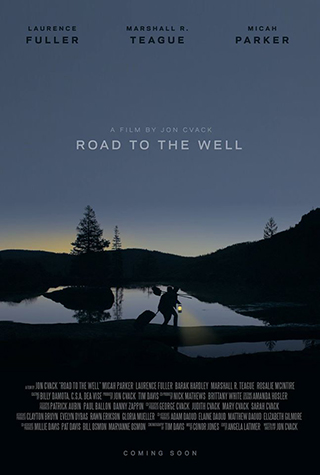