Sometimes embracing an insufferable and delusional movie character can be a rewarding cinematic experience especially if the redeemably-challenged protagonist brings something to the table beyond the obvious despicable platitudes. In the crass sporting satire, The Bronze, the audience is supposed to unleash their wicked funny bones at the door for a former foul-mouthed Olympic blonde-haired narcissist stuck in the nostalgic past of her previous glory days on the balance beam. Unfortunately, director Bryan Buckley’s toothless and raunchy comedy does not quite land on its feet smoothly enough to earn a decent score from the sideline judges.

The brain trust behind the strained The Bronze is the film’s star/co-writer Melissa Rauch (from TV’s long-running “The Big Bang Theory”) and her fellow scriber and husband Winston Rauch. In theory The Bronze had the potential to riff marvelously on the trappings of fleeting celebrity while adding some biting commentary about the jingoistic sensationalism of American competition. Sure, there are a few amusing moments in The Bronze worthy of a few chuckles here and there. For the most part, however, the movie feels uncharacteristically stiff and never delivers the hearty cynical laughs it strives for so clumsily. Instead, the film’s demanding has-been hussy and her endless self-absorbed and self-entitled sense of importance registers as distant and wooden.

Yesteryear’s gymnast darling Hope Ann Greggory (Rauch) was the petite powerhouse that captured the nation’s undivided attention after winning the bronze medal while competing on a fatal Achilles tendon. Hope was, quite simply, the toast of the town in the 2004 Olympic Games. One would say she was America’s sweetheart and the spirit of the country’s “never say die” mentality. Unfortunately for the celebrated young woman, her foot injury ended her continued Olympian career. Now twelve years later Hope basks in obscurity in small town Amherst, Ohio where she is no longer treated like a sporting queen nationwide with the few exceptions of seldom local notoriety.

Noticeably the acid-tongued Hope still holds on to her newsworthy nostalgia highlighting her cherished heyday of constant praise and pride. She has become tyrannical in mood and madness with demanding temper tantrums and pushiness. Hope has become relentlessly obnoxious and her unbearable tendencies run deep. She refuses to let go of yesterday’s stardom and will do everything it takes to maintain her waning worthiness in the public eye. In fact, Hope still shamelessly wears her Olympian Team USA warm-up suit with her bronze medal draped around her neck.  Additionally, she craves special attention and expects free things offered to her. Hope’s sheer pettiness is only matched by her need to stay relevant.

Besides being holed up in her bedroom full of her Olympic achievements as she watches old tapes of her past gymnastic performances, Hope really does not do much with her pathetic existence although she manages to frequent the mall and have free food served to her from a pizza shop willing to cater to her bratty whims. Her brow-beaten, mail-carrier father Stan (Gary Cole, “Tammy”) daringly suggests that her daughter do something with her talents such as going into coaching. However, the spoiled Hope reminds her Daddy Dearest that she is a star and not a coach relegated to the background of grooming another star-in-the-making.

Hope’s enabling dad is not the only thorn in her side as others have been subjected to her ire as well. Former teammate Lance Tucker (Sebastian Stan, “Captain America: The Winter Soldier”) effectively gets under her skin with his brand of pomposity. When Olympic teen hopeful Maggie Townsend (Haley Lu Richardson, “The Young Kieslowski”) arrives on the scene and shows some excitable enthusiasm as she threatens to become the newest Olympian heroine this does not sit will with the raging Hope. This gets further complicated because the youngish Maggie actually idolizes the nasty-minded Hope. Eventually (and predictably) Hope agrees to mentor the giddy Maggie as she is assuming the present-day role of America’s fresh-faced high-flying honeybun. Gone are the days of the desperate Hope stealing money and perusing through undelivered mail in daddy Stan’s parked postal truck. Reluctantly, Hope trains the chronically cheery Maggie with an arm’s distance length method of feeling. Soon, Hope realizes the therapeutic measures in learning to revolve and give back some of her competitive wisdom to her talented charge.

The Bronze is proud of its naughty impishness as it does tap into some slight subversive themes especially when Rauch’s Hope is let loose with her random bitchiness. Still, the movie is not consistent with its snickering mean streak and decides to unsteadily morph into a rudimentary redemptive fable. Hope Ann Greggory had spent the better half of the film demonstrating her blustery personality and causing plastic plants to wilt in her incorrigible presence. So now softening Hope in a connect-the-dots conclusion usurps the purpose of the narrative’s aimless scathing barbs. The edginess of Rauch’s Hope character was mildly amusing but never really grounded in grand-standing outlandishness to the point of relatable cynicism. The heartwarming vibes simply gives this synthetic romp an uneven balance that the nimble Hope Ann Greggory cannot recover from on her talented toes.

The Bronze also wallows in its share of in-house gymnastic sex gags, waif-like flexible females parading around for whispering titillation effect and the usual juvenile references to body parts. The Rauches’ spotty script is stretched thin and the hit-and-miss nature of Melissa Rauch’s Olympian bad-mouth Barbie doll is met with mixed results. Somehow Rauch’s hardcore harlot gets lost in the shuffle regarding her questionable acerbic comic timing and that spells disaster for an indie dramedy that relies on its devilish wittiness. Even real-life gymnastic greats such as Dominique Dawes and Olga Korbut are merely tossed in as a minor salute to the film’s Olympic-laced background.

Grating and repetitive, The Bronze manages to curiously finish fourth in a two-man contest . . . much to the dismay of caustic cutie Hope Ann Greggory. 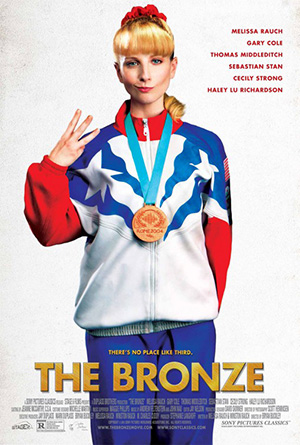