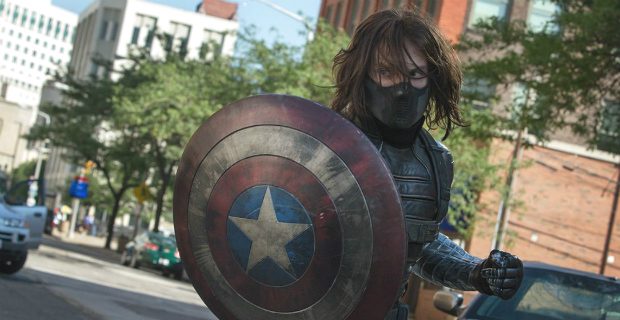 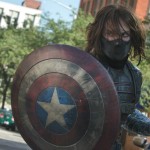 Marvel Studios has perfected the art of pumping a lot of effort and a ton of money into a production and still making the result look lazy. Plenty of talented people contributed to the slick blockbuster sequel Captain America: The Winter Soldier, but what does it all add up to? Just another cog in the machine, the latest piece in Marvel’s artless pursuit of cold cash. This one has its sights set on real world issues such as the dangers of sacrificing privacy for so-called security and the ever-lasting traumas of war, but like Marvel superhero pics before it, Captain America: The Winter Soldier finds a way to package its treatment of the big ideas with a clumsy heavy-handedness that just feels terribly dull.

It doesn’t quite start this way, though. As usual, a Marvel movie begins with promise, this time re-introducing the character of titular super-soldier Steve Rogers (a returning Chris Evans) in a modern Washington, D.C. setting. Some playful banter between Steve and war vet Sam Wilson (Anthony Mackie) establishes the comical breadth of our hero’s fish out of water status when Sam recommends some music and Steve whips out a notepad with a list of all the entertainment-related things he still has to catch up on now that he’s a permanent resident of the 21st century. One of the featured movie titles is “Rocky” with “Rocky II” a parenthesized question mark.

Moments later, Steve is called into duty and he races off to don his Captain America duds so he can rescue some hostages from the hands of pirates on a ship in the Indian Ocean. This first big action sequence shows off Cap’s abilities more entertainingly than either of his previous appearances in his first solo effort, “Captain America: The First Avenger” and “The Avengers” ever did, plus there’s some significant plot-forwarding information revealed when Steve discovers that his partner Black Widow (Scarlett Johansson) has a side mission that has nothing to do with saving hostages and everything to do with protecting shadowy S.H.I.E.L.D. documents.

This reveal, mainly that S.H.I.E.L.D. director Nick Fury (Samuel L. Jackson) is keeping Cap in the dark about certain objectives, marks the beginning of our hero’s disillusionment with his bosses. Taking a symbol of super-powered patriotism and national hope and then destroying his innocence by suggesting the organization he serves is a bit shady sounds like a smartly cynical twist that can quickly bridge the gap between Steve’s World War II-era experiences and the modern militarized landscape. At least in theory, the idea works well.

But directors Joe and Anthony Russo soon find themselves in the usual Marvel trap, serving up one loud, clanging action sequence after another and routinely minimizing any tension or excitement by turning the onscreen heroes into invincible beings. Never before have the fleshy live action versions of movie characters and their plastic action figure counterparts been so interchangeable. It must be really frustrating choosing a villainous lifestyle in this universe because no matter what you throw at these heroes, they can take it. I’m pretty sure someone could detonate a bomb that’s strapped to Captain America’s back and good ol’ Steve would find a way to muffle the explosion in his armpit or something.

Similar ridiculousness is often on display here, but it’s rarely been so brazen. Not only are Cap and his buddies capable of surviving absolutely anything, which is pretty much par for the course with these blockbuster flicks, but death is officially a temporary state now. No one stays dead for long, which allows the Russo brothers to set up a treacly tear-jerking moment as nothing more than a ruse while also digging up ghosts from Cap’s past. It’s interesting to see how elements of the plot interlock with the first solo Captain America flick, considering that seven decades have passed between their respective timelines, although it ultimately just serves to remind us that Marvel has set up a world where bending the rules to fit the latest story is not only possible, but enthusiastically encouraged. 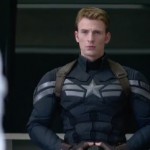 The plot of Captain America: The Winter Soldier moves mechanically forward by putting Steve in a tight spot where he feels he can trust only a couple of his closest allies. The corrupt government focus widens as we learn that everyone on screen fits rather neatly into one of two camps with the dark side filling up rather quickly. It’s not hard to tell who the really bad guys are here, especially when one character in particular follows up the reveal of their true nature by bolding, italicizing, and underlining their villainy when they shoot their accidentally eavesdropping housekeeper. Cap is surrounded by nasty, manipulating individuals and even finds a physical match for himself in the sub-titular Winter Soldier (Sebastian Stan), whose bionic arm and silent demeanor make him a rather intimidating foe.

There are elements here that could be worked into something exciting, but this version basically clutters them with endless chase sequences that are as visually forgettable as anything Marvel Studios has put on screen to date. Even the diseased government scandal doesn’t add up to much because it all boils down to the enduring evilness of Nazis. Sure, an offshoot of the Third Reich makes sense in relation to our war vet hero, but it feels like a recycled threat that’s just a little too easily black and white for the territory this movie intends to cover.

Following the lame pattern of the post-Avengers flicks, Captain America: The Winter Soldier crashes and burns during the final stretch. The whole third act of the film is a mess of epic digital effects and pointless posturing. It just becomes impossible to care when the big finale reduces the conflict to a jumble of heroes trying to transform a trio of massive gunships into a bunch of CGI explosions. Of course, Marvel’s popularity only grows, so take this all with as many grains (or piles) of salt as you like. Their creative drive seems to be gone, but the studio’s safe, accessibly generic approach is paying dividends. These heroes may be a bunch of bland product-pushing puppets, but at least they’re getting rich. Only in America. 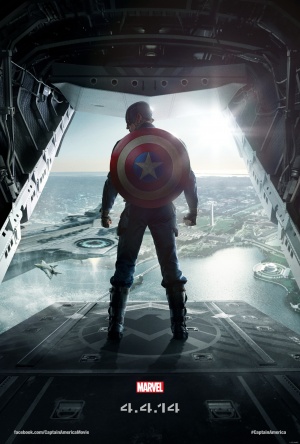