There is a moment early in Kenneth Branagh’s intricately constructed adaptation of Agatha Christie’s classic whodunnit when Hercule Poirot (Branagh) stands on the deck of a ship as it leaves Istanbul. Poirot is captured center frame: The deck, the railing, the adjacent cabin and the sea itself are balanced perfectly around him. The shot is illustrative of Murder on the Orient Express as a whole, which centers upon Poirot as the audience’s guide through the cinematic lattice, and also as the center of the film’s thematic and indeed philosophical exploration. As one would expect in a detective drama, Poirot provides the balance between mystery and understanding, but this conceit goes further, as this very balance becomes less steady and understanding less certain as the narrative unfolds.

The twists and turns of the story are well known to many. This reviewer, however, had the pleasure of not knowing the story at all and therefore encountered the titular murder and subsequent investigation as a series of reveals and genuine surprises. Even those familiar with the story, however, may find much to enjoy with Branagh’s stylish presentation and delivery. Director of photography Haris Zambarloukos creates a mobile and captivating cinematography, including some extraordinary overhead shots that delay showing the full extent of a scene just long enough for the viewer to cease expecting it, before the camera pans to reveal further details. Zambarloukos also captures much of the film in long takes reminiscent of the work of Emmanuel Lubezki in “Birdman” and “The Revenant.” Like the latter of these, a cold and snowy environment enshrouds the events of Murder On The Orient Express, vast mountains dwarfing the eponymous train as it moves with a smooth motion similar to that of the camera.

This fluid visual style neatly complements the wattage of the starry cast who play the passengers aboard the famous train, all of which are neatly sketched and provide a colorful collection of characters. From Johnny Depp’s (“Pirates of the Caribbean: Dead Men Tell No Tales”) oily Edward Ratchett who spars words with Poirot over cake, to Judi Dench’s (“Victoria and Abdul”) haughty Princess Dragomiroff and her (seemingly) downtrodden maid Hildegarde Schmidt (Olivia Colman, “Tyrannosaur”); from Michelle Pfeiffer’s (“mother!”) overly garrulous Caroline Hubbard to regular Branagh collaborator Derek Jacobi’s (“My Week with Marilyn”) Edward Henry Masterman; from Willem Dafoe’s (“The Florida Project”) curiously accented Gerhard Hardman to Daisy Ridley’s (“Star Wars: The Last Jedi”) stellar turn as the cool and collected Mary Debenham, each passenger/suspect is more than they seem and provides an excellent foil to Poirot. Yet the film ensures that Poirot himself is also layered, as a constant strain of melancholy plays behind Branagh’s searching eyes and flamboyant mustache. Poirot’s remarkable deductive abilities and suggestions of obsessive compulsive disorder are balanced with regular references to a photograph of a lost love, and a broader sadness at a world that he believes is not how it should be. This belief feeds into the philosophical investigation of Murder on the Orient Express, which seems to develop in response to Poirot’s a rather naïve moral perspective, expressed early in the film: “I can only see a world as it should be. It makes an imperfection stick out like the nose on your face.”

His view proves highly significant, as while the viewer may agree or disagree with Poirot, it makes sense that a detective would create a mental construct as a bulwark against the contradictions and iniquities that Branagh’s character encounters. But as Poirot and the audience learns, if no one is what they seem, perhaps the world at large is similarly dubious and possessed of shades of gray. This conceit plays into the visuals, as at times the largely digital exteriors are at odds with the physical interiors. Jim Clay’s production design evokes a sense of period, location and society, but the digital effects seem overly pristine and smack of artifice, modernity and transience. Yet this tension is thematically effective as Murder On The Orient Express is acutely interested in the tensions between artifice and reality. Many shots capture the characters through multi-paned windows, expressing the multiple roles they play and the various perspectives available, both narratively and morally. The film emphasizes such relativity in moments when Poirot reconstructs the events of the titular and other crimes, in a manner similar though more reserved than that seen in “The Limehouse Golem” earlier this year. Also unlike that film, Murder On The Orient Express eschews gore, which again supports the somewhat conservative morality that Poirot puts forward, and adds further meat to the philosophical meal.

So much visual and narrative backflipping might become wearing if without purpose, but where the film goes with this perspective proves to be arresting and feels quite radical. At one point there seems to be a resolution that feels somewhat anticlimactic, but more is still to come before Branagh/Poirot delivers the coup de grace that is both expected yet refreshing and pleasingly ambiguous. This ambiguity undercuts the overtly artificial construction of the film’s milieu, demonstrating that standards of morality and ethics may be as much a construct as the mechanisms of a railroad, or indeed a plot. It is the film’s philosophical investigation, that perhaps Ludwig Wittgenstein might enjoy, that elevates Murder on the Orient Express into something special. Combined with his starry cast, intricate and vivacious storytelling, Branagh has breathed new life into a classic story, making it fresh, vibrant and relevant.

'Movie Review: Murder on the Orient Express (2017)' has no comments 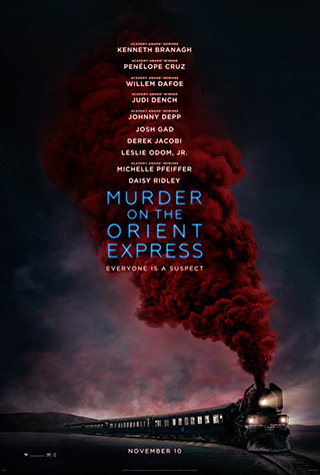