All I remember from eighth grade was being shunted from the Glee Club to the Stamp Club because, as my music teacher said, “it would be a better fit for you.” Better fit or not, it interfered with my plan to be a show biz star in the mold of Al Jolson. Unlike awkward pre-teen Kayla (Elsie Fisher, voice of Agnes in “Despicable Me 2”) in 27-year-old director Bo Burnham’s coming-of-age comedy/drama Eighth Grade, however, I had no smartphone, Snapchat, Instagram, Youtube, or other social media with which to direct my existential dismay. Withdrawn, insecure, and lacking in self-esteem, Kayla is in her last week of eighth grade before she tackles the dreaded high school, even more of a challenge.

Voted by her classmates as “most quiet,” Kayla does not talk much and apparently has no friends. She feels emboldened enough, however, to offer a series of instructional videos on Youtube called “Kayla’s Corner,” in which she gives advice to others on such subjects as being yourself, putting yourself “out there,” and turning pretend confidence into the real thing. Stumbling her way through her delivery with a variety of “ums,” “ers,” “likes,” “you knows,” and “whatevers,” (the way the director must believe all teens speak), the videos offer some good lessons. While they may not be reaching their intended demographic, they certainly hit home to an audience of one, namely Kayla.

Living with her divorced, overly solicitous dad Mark (Josh Hamilton, “The Meyerowitz Stories”), the sullen Kayla resists anything more than one-word answers to her dad’s attempts at conversation, preferring to immerse herself deeply in her laptop and smartphone. She reluctantly agrees to attend classmate Kennedy’s (Catherine Oliviere, “The Weaver of Raveloe”) birthday pool party after an invitation from Kennedy’s mom (Missy Yager, “Manchester by the Sea”), but ultimately probably wishes she hadn’t. The condescending Kennedy sneers at Kayla’s birthday present of a board game which Kayla insists is a lot of fun, but fun doesn’t seem to be present at that moment.

Her stoop-shouldered dumpy look and the fact that she is the only one without a bikini unfortunately does not attract much attention from the boys, except for Kennedy’s cousin Gabe (Jake Ryan, “Moonrise Kingdom”), who is into underwater game playing. Kayla has her eye on Aiden (Luke Prael, “Boarding School”), but the boy who was voted “best eyes,” does not have his best eyes turned in her direction. She perks up later when, at a high school orientation, she is assigned to be high school student Olivia’s (Emily Robinson, “Private Life”) “shadow” and feels confident enough to go to the mall with Olivia and her friends Trevor (Fred Hechinger, “Alex Strangelove”) and Aniyah (Imani Lewis, “Star” TV series).

The good feelings are abruptly derailed, however, when she catches a glimpse of her overbearing father peering at her from an upper level like a hovering guardian angel. Her decision to turn down dad’s offer of a ride home, however, leads to an even more dicey encounter with Olivia’s friend Riley (Daniel Zolghadri, “Ready Player One”), a “truth or dare” aficionado. Remarkably performed with authenticity by Elsie Fisher, we applaud when Kayla takes some halting steps towards maturity as exhibited in her conversation with her dad late in the film. Though their talk lacks the substance of the similar father-son conversation at the end of “Call Me by Your Name,” it is still an opening for both to expand their relationship.

Eighth Grade is a sweet and touching film that presents the characters and situations as they are without judgment or evaluation. (Unfortunately, eighth graders cannot see the film without a parent because of an R-rating for language, though that might stimulate a dialogue between parent and child). While Kayla comes across as innocent and needy and we root for her, her character lacks the nuance and depth that could have taken the film to another level.

While we know that it is a struggle for teens to fit in and there have been reported incidents of anxiety and depression among middle school students, Burnham’s portrayal of the eighth grade as being somewhat akin to Dante’s Inferno ignores the fact that there are other things on the mind of many adolescents besides being obsessed with their “devices,” and that true self-awareness can only begin when you take steps to become involved in things larger than yourself. 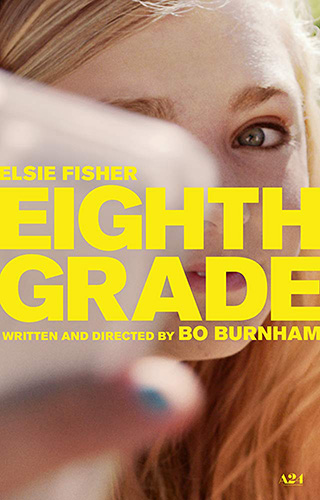