Steven Spielberg’s Ready Player One is nothing short of biblical for the pop culture enthusiast. More surprisingly, however, is the engaging narrative and even the likable cast of (young) characters. The expensive movie ran Warner Bros. $175 million, but Spielberg’s project does reap the benefits of that expense — with stellar CGI and a virtual world filled with such vibrancy, it’s no wonder that citizens of 2045 have readily embraced “the Oasis.”

The sci-fi adventure is both nostalgic and surprisingly prophetic (assuming society continues its electronics dependency). Taken as a whole, the film builds its characters with fine attention to detail, and that includes both in and out of the Oasis (that’s double duty for Mr. Spielberg). The performances from the young ensemble are also quite serviceable, whereas oftentimes “cringeworthy” is the more appropriate adjective. And where other directors (we’ll call Spielberg an auteur) could easily veer off the rails with the high-concept premise of Ernest Cline’s novel/source material, Spielberg captures nostalgic charm and wraps it around a world of corporate imperialism, escapism and lifelike avatars.

The world dreamed up by Cline and brought to the screen by the director of recent Best Picture Oscar nominees “The Post” and “Bridge of Spies,” finds the Earth in despair, as poverty is at an all time high and urban destinations have been turned into vertical slums called “Stacks.” Much of the remaining corporate power lies in the ravenous Innovative Online Industries (IOI), led by the brutish Nolan Sorrento (Ben Mendelsohn, “Rogue One: A Star Wars Story”), whose latest goal is to seize the Easter Egg challenge orchestrated by late Oasis architect and video game mastermind James Halliday (Mark Rylance, “Dunkirk”), who now exists as an avatar in the present-day virtual reality world he created.

Enter Wade Watts, whose Oasis gamer tag is Parzival (Tye Sheridan, “X-Men: Apocalypse”). The 18-year-old is an egg hunter aka “Gunter,” and part of the “High Five,” a clan poised to solve Halliday’s puzzle — “First to the egg!” — which means proprietary control of the Oasis. Despite Parzival’s encyclopedic knowledge of Halliday’s life (the key to winning the challenge), the gamer/scholar must open his mind to help from others in the Oasis, including fellow adventurer Helen Harris, aka Aech (Lena Waithe, “Master of None” TV series), and the mysterious Samantha Cook, aka Art3mis (Olivia Cooke, “Thoroughbreds”).

Cinematographer Janusz Kaminski’s world-building (both real and imaginary) for our heroes to adventure through is impressive, but the movie’s biggest takeaway is the infusion of cameos from top onscreen heroes and iconography dating back 30-plus years. Nearly everything imaginable is found in this virtual world, from the “Back to the Future” DeLorean to Hello Kitty to King Kong to Spielberg’s own larger-than-life characters. Their inclusion is a Herculean effort — and it’s actually surprising that Hercules, too, wasn’t recruited for a certain third-act scene. Best, however, is that these appearances are organic to the action (no glaringly obvious product placements), and they arrive in unexpected and stunning fashion.

If there is a weakness in the film it’s in Zak Penn and Ernest Cline’s script, although it is nothing in the way of bad writing or incoherence. The issue is that the world around Parzival, Art3mis and Sorrento — also inhabited by the comedic bounty hunter and hoarder, I-R0k (T.J. Miller, “Deadpool”) — is so astounding, that the happy-go-lucky conclusion and basic genre tropes just become all the more evident. One can’t help but wish for some outcomes to be a bit more imaginative to match the ridiculously imaginative backdrop.

While studio science fiction films chew up budgets in space fantasies in the coming months and years (looking at you “Star Wars”), it’s good that the end result of Ready Player One is all around fun for viewers — millennials and Gen X alike (and maybe even a Baby Boomer or two). For Spielberg specifically, it’s a drastic departure from the strongly executed political dramas of recent and shows that the auteur’s repertoire continues to grow across the decades, while simultaneously hopping between genres. 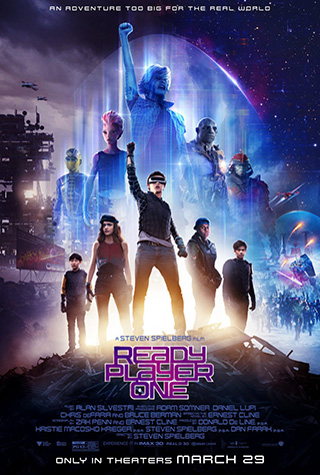