Winner of the Silver Lion at the Venice International Film Festival and Israel’s submission to the 2018 Oscars for Best Foreign Language Film, Israeli director Samuel Maoz’s (“Lebanon”) brilliant and confounding Foxtrot reveals itself less by narrative than by images: A narrow road in an empty stretch of desert, a lonely camel meandering through a checkpoint, a young recruit’s gyrating dance in the middle of the road, soldiers in a panic opening fire. Though the images imply condemnation of the Israel Defense Forces (IDF), the war, and Israel itself, Foxtrot is not an overtly political film but a family drama that has universal meaning to anyone who has suffered the unexpected loss of a loved one. The title suggests that life unfolds like a series of dance steps: Forward, side, and back in a preordained pattern, only to end up in the same place in which it began.

Shown in the format of three connecting stories, in the first segment as Dafna Feldmann (Sarah Adler, “The Cakemaker”) opens the front door of her upscale high-rise Tel Aviv apartment, she immediately knows that the look on the faces of officers of the IDF can mean only one thing. “Mr. Feldmann,” says the first soldier to Michael (Lior Ashkenazi, “Norman: The Moderate Rise and Tragic Fall of a New York Fixer”) who is lurking in the background, “I’m sorry there’s no easy way to say this. Your son Jonathan (Yonaton Shiray, “A Tale of Love and Darkness”) was killed tonight in the line of duty.” The officer does not say anything about the circumstances of his death, only that he had “fallen in the line of duty,” a military euphemism that puts a brave face on another in an endless stream of deaths to report on.

Speechless, almost catatonic, Michael is told to keep drinking water by the officer who programs his cell phone to ring every hour to remind him. A successful architect, former tank commander, and the son of a survivor of Auschwitz, the tragic news unleashes the hidden rage that Michael has carefully kept from public view, directing it towards the unfeeling military bureaucracy. Fate, Maoz suggests, is not an unyielding emanation from God, but an innate part of a people’s legacy passed down through generations. When we learn that his family has roots in the Holocaust, we understand that his paralysis of feeling can be traced to a childhood of quashing his emotions, a situation that creates, “a new generation of victims.” Though we can feel Michael’s distress, his flashes of cruelty, especially towards his dog, are off-putting and perhaps designed to keep us at an emotional distance.

The second segment takes place in a desolate military checkpoint known as “Foxtrot,” a supply road used by Palestinian cars and wandering camels, located somewhere on Israel’s northern border. Moving from black comedy to tragedy, the sequence is an almost dreamlike and surreal allegory that provides an absurdist view of the war. The young soldiers, including Michael’s son Jonathan, form a four-man guard who have become increasingly bored with the daily routine. They pass the time in their shipping container which serves as a barracks by telling each other stories about their home life, eating unappetizing meals out of cans, and rolling an empty tin of canned meat towards the wall to see how fast their container is sinking into the mud.

In one of the most indelible moments of Foxtrot, Jonathan hugs his rifle and performs an unencumbered joy-filled dance in front of the barracks, a scene reminiscent of Galoup’s wild, uninhibited dance that ends Claire Denis’ masterful “Beau Travail.” Breaking the interminable quiet are cars carrying Palestinians seeking to pass through the checkpoint. Travelers are compelled to sit and wait for long periods of time and, in one instance, a couple dressed for a wedding are humiliated by being forced to stand outside in the pouring rain while the soldiers take their time checking their IDs. When an act of sudden violence against unarmed civilians occurs, an IDF commander covers it up, telling the perpetrators that they will not be punished, that unfortunate things sometimes happen in wars.

In the third sequence, after the passage of several months, the film returns to the Feldmann’s apartment as Michael and Dafna, now living apart, meet to remember what would have been Jonathan’s twentieth birthday. Still processing their grief, Dafna strikes out at Michael for his weakness that she alleges caused Jonathan’s death, but the music of Arvo Pärt’s “Spiegel im Spiegel” tells us that, underneath the anger and the grief, their love is graced by the truth of acceptance and reconciliation and that, in the poet Rumi’s phrase, “the night ocean is filled with glints of light.” Foxtrot has been roundly condemned by Israel’s Minister of Culture and Sport, Miri Regev, (who hasn’t seen the film) for its “self-flagellation and cooperation with the anti-Israel narrative,” calling it “a work of treachery,” and asking for the state to end funding for films that can be used as “a weapon of propaganda for our enemies.”

In spite of the Minister’s comments, Foxtrot won eight Ophir Awards (Israel‘s Oscar equivalent) including awards for Best Picture, Best Actor (for Ashkenazi), and Best Director. In an interview with The Times of Israel, Maoz responded to the critics by saying that the film was simply meant to open discussion and create dialogue, “If I criticize the place I live,” he said, “I do it because I worry.” After the recent killing of at least 15 unarmed Palestinians by Israeli soldiers near the barrier separating the Gaza Strip from Israel, an act for which Israeli Prime Minister Benjamin Netanyahu offered neither sympathy nor remorse, perhaps it is time for all of us to worry. 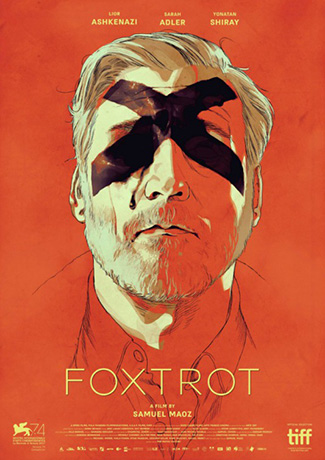