In “Ant-Man” viewers were surprised with a small (and giant) Thomas the Tank Engine having a profound impact in the action and in its sequel, Ant-Man and the Wasp, a giant PEZ dispenser is served up for recognizable laughs. What else Marvel Studios has in store in their latest addition to their cinematic universe isn’t so clear just yet. What is obvious is Hope van Dyne (Evangeline Lilly) dons The Wasp suit in an effort to help Scott Lang/Ant-Man face off against a new antagonist who presumably has a vested interest (scientific or militaristic) in the tech of Dr. Hank Pym (Michael Douglas) or wants to take over the world or wants revenge. Take your pick or come up with one of your own — any motivation will work. There’s not much to the trailer, but there’s enough to at least pique interest in what’s to come. Check it out now, courtesy of Marvel Studios. 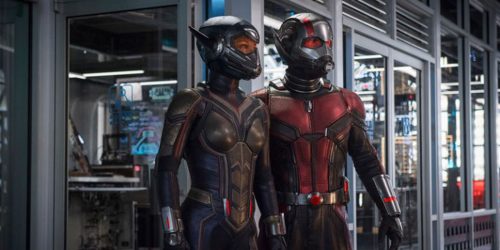 Official Synopsis:
As Scott Lang balances being both a Super Hero and a father, Hope van Dyne and Dr. Hank Pym present an urgent new mission that finds the Ant-Man fighting alongside The Wasp to uncover secrets from their past.