When looking upon the first frame of Paradise Hills, the feature directorial debut of Spanish filmmaker Alice Waddington, your eyes are thrown into a wonderland of bizarre beauty. With a crisp sci-fi world of equal parts whimsy and despair, this feminist fairy tale has all of the looks of something remarkable, but lacks the proper running time to flourish all of its various messages fully.

Entering what seems to be the end of the story, we meet our lead protagonist, Uma (Emma Roberts, “The Blackcoat’s Daughter”) on her wedding night. Dressed to the nines in the most glorious of high-concept wedding gowns, and a creepy cage mask to match, characters make remarks to how wonderful of a girl Uma has become. All seems utterly magical in every way — until a line is spoken by Uma’s now-husband (Arnaud Valois, “Our Wonderful Lives”) that alludes to a darker truth behind Uma’s eyes.

Cut to two months earlier, and we meet a much less polished Uma, who has no acknowledgment of how she got to the mysterious island known as Paradise. With her messy blonde hair and dressed in a dirty blue robe, she looks like a modern-day slumpy Alice — examining the cascade of red and white roses in this demented wonderland. Everything seems too clean, too beautiful, too safe, and too controlled — a consistent visual theme shown in every object and costume on screen.

But Uma is not alone in this strange new place. Her eventual friends, Chloe (Danielle Macdonald, “Every Secret Thing”), Yu (Awkwafina, “Crazy Rich Asians”), and Amarna (Eiza González, “Baby Driver”), have all been sent to Paradise for various reasons. Uma’s parents want her to submit to her arranged marriage, Amarna’s record label wants her to become a sugary perfect pop star, while Chloe and Yu’s parents hope their daughters will fit into the societal norms of weight and proper business etiquette. And under the watchful eye of the beautiful and posh leader known as The Dutchess (Milla Jovovich, “Resident Evil: Retribution”), everything seems to be running smoothly on this stunning island.

Of course, not everything is as it seems in Paradise — and when Uma and her friends start to put the pieces together of what is happening behind the scenes after their 2-month stay, the enchanting nature of their new residence immediately turns into the stuff of nightmares. Yet the real horror for the audiences watching Paradise Hills has nothing to do with the terrors in store for the characters, but rather the other half of the movie that seems to be missing entirely.

Film is a visual language, and the rule (according to most) is show and not tell. Paradise Hills does indeed have quite a bit to show, but it suffers from telling its audience way too much. We learn of the characters’ motivations through pounds of painful exposition, making the emotional connection to the ensemble as lackluster as reading the back of a Barbie doll box. Love interests come up out of the blue, and plot twists have little to no logic to them.

Thankfully, with beautiful work by costume designer Alberto Varcarcel and production designer Laia Colet that blends into Disney meets 90’s Magical Girl dream setting, Waddington’s first feature is work of millennial artistic genius. Everyone has done their referential homework, giving nods to everything from the likes manga series “Chobits” to Stanley Kubrick’s “A Clockwork Orange.” Visually, it proves that Waddington is a talent that deserves to be handed even more impressive projects down the line. Maybe she’ll be the next one in a Marvel decorated director’s chair? Who knows what the future holds.

Whether it be editing issues or something was missing from the original screenplay by Nacho Vigalondo (“Colossal”) and Brian DeLeeuw (“Curvature”), it is unfortunate to notice that something within this fantastical fantasy got lost in the cinematic shuffle. With its clunky narrative and confusing lore, Paradise Hills comes off more like an hour and a half long music video for a pop idol group’s concept album than any solid cinematic storytelling. It will be remembered for its aesthetics and inspire many a Pinterest board, but for its thought-provoking messages? Not so much. 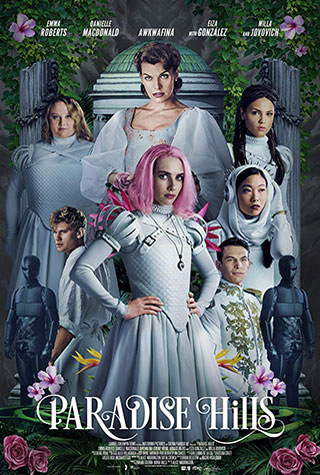