Have you ever had one of those dreams when you wake up in a room you don’t recognize, and there’s not a person to be found? You run desperately through the empty corridors, shouting for help and no one answers? It’s like the beginning of zombie horror classic “28 Days Later,” but the only gnawing that takes place is fear at the pit of your stomach.

Welcome to the unrelenting dread of The Blackcoat’s Daughter.

It’s winter break at the Bramford School for girls, and all the students are going home to their families. All of them, that is, except Kat (Kiernan Shipka, “Very Good Girls”), a haunted-looking freshman and Rose (Lucy Boynton, “Sing Street”), a senior in the midst of a pregnancy scare. Their only company, as they wait for the arrival of their parents, are two members of staff, rumored to be Satanists. Meanwhile good-natured Bill (James Remar, “Django Unchained”), sees a quiet young woman named Joan (Emma Roberts, “We’re the Millers”), sitting alone on a bench, in a coat ill-befitting the freezing weather. Concerned, he offers her a lift.

There are many pleasures to be found in Oz Perkins’ directorial debut. Chief among them is the deliciously deliberate drip feed of information he provides us with. Perkins has complete control of his material and he knows at precisely what moment he’s going to dole out the answers. What’s wrong with Kat? What are the visions the girls keep having; memories, or premonitions? Whose voice is that on the phone? What do Rose and Kat have to do with Joan? Are the staff at the school really Satanists? You will find out, but only when Perkins is good and ready to tell you.

The Blackcoat’s Daughter is sparse in just about every way. The dialogue is bare-bones; no chummy, expositional chats to be found here. These characters aren’t burdened with backstories. There are no jump scares. The film’s color palette is populated with muted greys and blacks. Even the violence, though brutal, comes in short, sharp bursts. It’s a classy exercise in restraint.

The three woman at the film’s center underplay beautifully. Kiernan Shipka excels as the creepiest of the trio. Her eyes always seem to be on another plain, and you’ve never seen a more sinister smile. Lucy Boynton is our surrogate. Her steady progression from intrigued confusion to all-out-terror matches our own. Emma Roberts has found an unlikely home in horror, with appearances in “Scream 4” and TV series “Scream Queens” and “American Horror Story.” There’s an unknowable quality to her that, when used correctly (as it is here), becomes down-right chilling.

Beyond the performances, and beyond the violence, what makes The Blackcoat’s Daughter so disturbing is that pervasive sense of seclusion. The film takes place in a landscape with no extraneous people. There is no lovable gang that gets whittled down, one-by-one. Once the characters head down the path of destruction, you know there’s no hope of a rescue (the one policeman who does turn up, arrives hopelessly after the fact).

It’s that terror of isolation that makes The Blackcoat’s Daughter stick in your gut; as soon as the credits start to roll you want to surround yourself with as many people as possible. Because the next time you’re on your own, who knows what might happen . . .

'Movie Review: The Blackcoat’s Daughter (2015)' has no comments 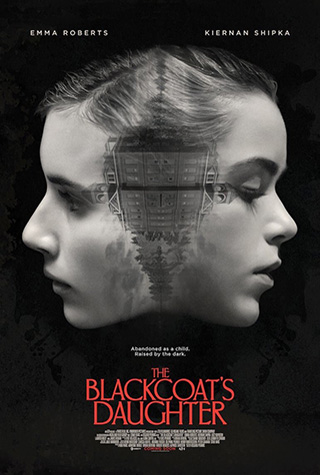