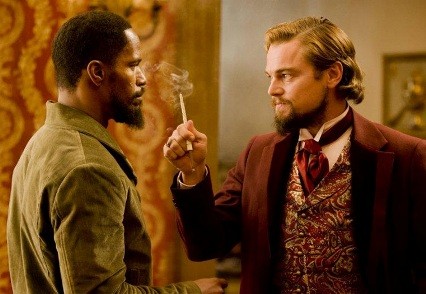 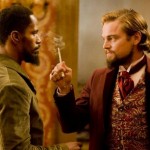 Highly influential, passionately inspired, and awfully long-winded, Quentin Tarantino has amassed a filmography that is soaked in self-indulgence. He’s made some great movies regardless, but I find myself now exhausted by his work, even if at times I’m thrilled and engaged. The experience of watching a Tarantino movie tends to be a scattered one, pieces working often independently of each other, but the whole package feeling needlessly stretched to some place beyond infinity. So with this formula in mind, Tarantino’s latest is both more of the same and something unique. Django Unchained, the filmmaker’s ode to spaghetti westerns, isn’t scattered at all. It’s actually a fantastic bit of fun until it goes south, a happening that occurs swiftly and early. The good is entirely isolated from the bad this time around, but that doesn’t stop Tarantino from falling into the same traps.

The first hour is a stunner, precisely and furiously introducing us to the characters and situations, and then charming us with crisp dialogue as Tarantino’s vision takes hold. Ultra-violence collides with crackling comedy as intelligent, well-spoken bounty hunter King Schultz (Christoph Waltz in a tremendous performance) frees slave Django (Jamie Foxx) from a chain gang and enlists him to aid in the locating of some particularly nasty criminals with a hefty price on their heads. Along the way, King and Django develop a friendship and the two end up embarking on a journey to rescue Django’s wife Broomhilda (Kerry Washington) from a despicable slave owner.

It’s a rather simple plot, but that doesn’t stop Tarantino from stuffing first hour of Django Unchained with memorable moments, kaleidoscopic imagery (Tarantino and cinematographer Robert Richardson utilize grainy film stocks to coat flashbacks in grindhouse grime), and dark humor. A scene involving a hooded gang of racist raiders complaining about the poor job that was done on the cutting out of eye holes in their bags is particularly funny in its absurdity. The problem is this hugely successful first hour is followed by two more and those are far less interesting.

At first it stalls and then it stumbles and by the time that villain Calvin Candie (Leonardo DiCaprio, his character’s evilness defined by the many smiles that reveal his vile prosthetic teeth) shows up, the movie settles into a groove that slowly burns away the momentum of the narrative. Calvin is a very bad dude and there’s a certain novelty in witnessing someone as likable on the big screen as DiCaprio play such a horrible character, but the charm of the casting wears off quickly and DiCaprio’s shtick proves as one note as nearly everyone else in the cast (Waltz being the exception).

The elaborate plan is to have King and Django purchase Broomhilda legally and without any great trouble (other than some ethical awkwardness regarding the parts they have to play) from Calvin. But as it turns out, their plan is more time-consuming than actually elaborate. This gives Tarantino the space to sink into the situation and drag it out as far as he desires (that’s pretty damn far, by the way). As the conversations drone on and the situation inches ever closer to its inevitable conclusion, the actual ending feels endlessly out of reach. Tarantino just keeps pushing it back in a bizarre attempt to build suspense, as if delaying the obvious explosive shootout that’s bound to happen is some crafty way of keeping us on our toes.

Stranger still is what happens when Tarantino wraps up the story rather simply, only to suddenly twist a seemingly innocuous situation in order to facilitate the tagging on of another big bloody mass of movie narrative just in time for the overall affair to have completely overstayed its welcome. So while the second hour of the movie is dull and unnecessarily stretched, the final hour is almost torturous, taking us through all the same territory with none of the originality of the first chunk or even the potential promise suggested by the second. Django just keeps on blowing evil racist jerks away, while the freshness of this revisionist turning of the tables just dries up. 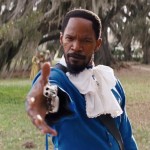 Beyond the narrative thinness, Django Unchained continues to make good on Tarantino’s promise he made with “Inglourious Basterds” that he would no longer use original music to score his pictures, instead opting for various pre-existing tracks only. As with his last movie, there are some intriguing song choices here and it’s good hummable fun when the opening credits are scored to the titular theme of the original 1966 “Django,” but I still feel like some original music could help lend the movie an additional shred of identity. And as for the original “Django,” Franco Nero drops by for a quick cameo that falls flat, a wink worthy only of an eye-roll. The direct references in this version are hit and miss to say the least.

Sadly, Quentin Tarantino has become a master of tedium instead of tension. His fingerprints are all over Django Unchained and it’s hard not to be impressed by this level of obsessive auteurism, but his fascination with his own dialogue and characters sends him on so many tangents that the dramatic fibers of the story become frayed and are eventually damaged beyond repair. As is the norm with Tarantino movies, there’s a great picture in here somewhere. It’s just all surrounded by a lot of nonsense that should have hit the cutting room floor instead of the big screen. After such a strong first third, it’s tough to watch the movie stall in the second and then simply devolve into another celebration of flashy violence in the last. Tarantino just doesn’t know when to stop anymore. 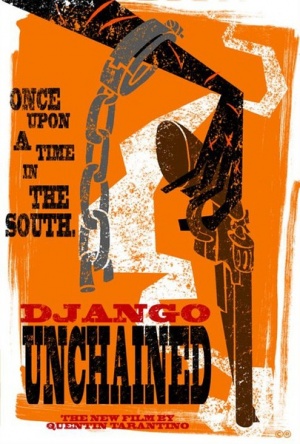