In the modern-day cinematic era reflecting racial divide, audiences are treated to their share of sensational discord, divisiveness, distrust and destruction with impacting, yet familiar fare, such as 2016’s offering of the immensely received “The People v. O.J. Simpson: American Crime Story” and even the profoundly thought-provoking and absorbing male-bonding drama “Moonlight” that speak the truth to conflicted blackness in contemporary, cynical America. Although the realistic and telling portrait of Black America continues to suffer in the disillusionment of oppression that echoes the historic struggles and corresponding psychological obstacles, there is always a unique perspective creatively where revealing, urgent and sacred territories are explored without the tap-dancing effect of cutting to the chase of indignant racial unrest.

Writer/director/producer Raoul Peck provides an intelligent, soulfully shocking and jarring journey into America’s checkered past and present race-based turmoil in the crafty and confrontational documentary I Am Not Your Negro, a compellingly menacing — yet oddly meditative — study of one man’s deep-seeded look into the radical boundaries of racial hostilities and identities, indifferences and indignities. Cleverly, Peck reinforces his message by incorporating a couple of stirring factors that pleads his case for his masterful and mind-numbing dissension into our curious psyches: Using the symbolic and powerful presence of one of the 20th century’s vibrant and welcomed vitriolic voices in noted author/activist James Baldwin and bridging together a trio of his famous friends all slain for the cause of unifying their troubled people through realized empowerment and principled pride — the immortal Malcolm X, Martin Luther King, Jr. and Medgar Evers.

The acidic spirit of I Am Not Your Negro invites the in-depth analysis of Baldwin’s unfinished memoirs entitled Remember This House to spring into life as the late and great gifted writer captures the core of frustration, human suppression and just plain hatred in the turbulent times of the Civil Right Movement where white supremacy, the promotion of segregation, rough-and-ragged police brutality, transparent pride (and brain-washing) in one’s blackness and institutionalized biases were a constant reality. In many ways Baldwin’s poisonous pen was a skilled weapon as he demonstrated how the endangered lives (and ruthless assassinations) of his dear and dynamic fallen civil rights leader friends should be a call to arms for his impoverished people to find their courageous convictions and revolt. Baldwin made no bones about his militant stance pertaining to the recklessness and assault on black unity (we witness his bold appearance on Dick Cavett’s talk show sharing the unsettling gospel of plight and pain).

Peck marvelously delves into the explosive archival footage where Baldwin acts as the calculating crusader that he was in soul, body and mind. The defiant author’s black activism is showcased with probing curiosity and the inclusion of his heroic colleagues adds to both the dramatic backbone of consciousness and the inevitable outcome of sorrow as the assassination of these relentless silenced black soldiers on their battlefield ensured they would never partake in the gratification or glory of their social mission.

Astutely, Peck enlists the forceful services of Academy Award-nominated actor Samuel L. Jackson (“The Hateful Eight”) as the film’s narrator to deliver Baldwin’s passages with rawness and disbelief. Jackson, as would any black American that can easily recall the humiliation and degradation as if it was just yesterday, is focused and shows signs of quiet fury.

The unflinching imagery that Peck colorfully paints his documentary with — stereotypical advertising of the simple-minded “Negro” (smiling hefty mammies and pappies serving pretty privileged white folks), dejected shots of war-torn black children and men in vintage Civil War photos, hedonistic black and white protesters mingling in combative fashion, toxic desegregation practices at corrosive campuses in the South, black church bombings, lynchings — all add a scathing, surrealistic sour taste to the mouth. That is, however, the critical and cruel appeal of this piece of extraordinary film-making that allows this intoxicating gem to examine the pot-boiling truths behind what it is like to live with black skin in American society that will never recover from its horrific, humble beginnings of racial exploitation.

Interestingly, Peck is also able to tack on millennial-based alienation and antagonism ripped directly out of today’s headlines where clashes between African-Americans and police are displayed, and political black movement groups and white nationalist sects that recall the oil-and-water sentiment of the chaotic 60s are shown to be on the rise. Thus, Peck could not illustrate any better the explicit vision and concerns that the insightful and combustive perceptions that the prophetic James Baldwin had imagined all along until his unique and skilled voice was finally silenced by his untimely passing in 1987.

Effectively galvanizing and a pervasive punch to the functioning system, Peck’s I Am Not Your Negro is thoroughly gripping and a significant slice of surging cinema that dares to question the never-ending search for harmony and humanity that now feels completely lost. And while the film is intensely provocative, topical, invigorating and unapologetic in its approach to uplifting the Black Experience, it should also deeply resonate with other groups of the disenfranchised. Whether black, white, brown, yellow, red or even polka dotted, it utilizes the outspoken word as the ultimate solution for racial resolve, even though it seems we cannot resist entry into darkened despair. 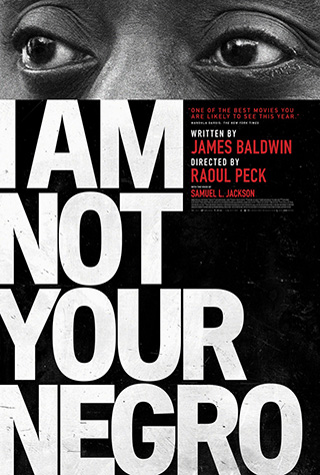