It Lives in the Attic? “It Lives in the Back of the Amazon Watchlist,” more like. Here is the latest from questionable auteur Steve Hudgins, the founder of Big Biting Pig Productions, a company specializing in ultra-low budget films made by him and his partner in crime, P.J. Woodside.

The plot of It Lives in the Attic is comprised of three interwoven stories, each led by a different character: Andy (Michael Coon, “The Caretakers”), Ellie (Jessica Leonard, “Frances Stein”) and Barney (Hudgins himself). We begin with Andy, a young backpacker who encounters some dodgy yokels and ends up in a violent confrontation. So far, so backwoods cliché. But within minutes we have the film’s central twist, as it is clear that Andy is mentally ill, and what we’ve seen may not be the objective truth.

Next up is Barney, a meek and pathetic research scientist. Bullied at work, where he nibbles the world’s smallest sandwiches, he finally makes it home to a most disgruntled carer, who is looking after Ellie, someone we assume to be Barney’s wife. Ellie is in a vegetative state. In one of the film’s few inspired moments, we’re shown a sentimental montage in which Barney feeds and bathes her — only to follow it up with some decidedly more sinister intentions.

Thereon, the good will garnered by the unpredictable storytelling so far begins to fragment, as we see how the three characters’ lives overlap. Hudgins chooses to jump about, spatially and temporally. The intersection of stories occurs at a place called “Club Fun” — presumably an attempt to inject a surreal, Lynchian quality to proceedings, but it comes off like bad performance art in a school hall. There’s even a bit of laughable animal mask tomfoolery, fresh out of the Overlook Hotel.

To his credit, Hudgins admirably strives for visual storytelling, eschewing found footage temptations and aiming for formalism, and he is committed to laying out the plot in a non-linear way. The dialogue is not good, but it could have been worse — there is at least a semblance of ambiguity. And I would concede that the central premise — a series of situations observed from the differing perspectives of the three main characters — is decent.

It’s just that the execution is so poor. For a micro-budget veteran, Hudgin’s film looks horrible. Bad acting is only made worse when it’s framed almost exclusively in flat medium shot. In practice, the promising perspective-hopping structure simply lumps us with a series of repeated scenes, which weren’t much fun the first time around, let alone the third. Faux tension constantly builds to doom cuts pertaining to nothing. It’s wrapped in a puzzle narrative, but a puzzle only a masochist would enjoy.

And what of the attic of the title? Let’s just say it’s more Richard Kelly than revelatory. We see elusive snatches of the doorway to the titular room; sometimes one of the characters even emerges from it. Yet somehow, for all its pointless vagueness, there’s an inevitability about the ending that renders it both ambiguous and meaningless, provoking thoughts not metaphysical but of a more immediate nature: Why did I commit myself to the past 85 minutes?

Upon reflection one accepts that the construction of the film has undergone consideration, even if the end result is entirely unsatisfying. Junk can be arranged as art, but at bottom it is still junk. There is no atmosphere or genuine tension-building to intrigue slow-burn horror fans, and precious little gore to thrill the more viscerally-inclined. Amateurishly played and narratively nonsensical, It Lives in the Attic is student-level filmmaking in both craft and approach. 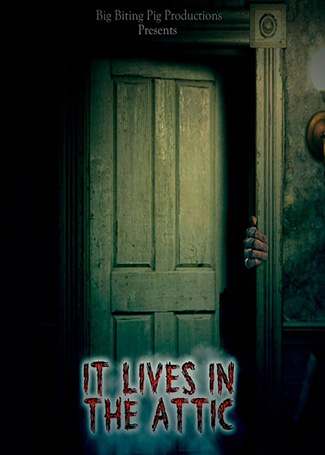