In 1951, a little more than six years after the Nazis were defeated and the last camp debarred, the German philosopher and critical theorist Theodor Adorno equally foreclosed the possibility of bringing words, or anything with them, to life. “There can be no poetry after Auschwitz,” he wrote, barring any beauty that could be derived from a world wherein something like this had happened. Shame was the most appropriate feeling to bear after such barbaric times. And hard will the human kind have to work to win back their right to make art. The German language had met the highest standards as a language that served to instruct systematic death. The German language had laid itself as the vehicle through which the unspeakable was ordained. The German language had become the official language of barbarism. It was not a dead language, but it became the very language of death.

Then Paul Célan came to clean the German language. Not only did his poetry cleanse all Nazi traces from his mother tongue, but it also proved Adorno’s dictum wrong with each and every word. Poetry was possible after the Holocaust. The German language could be used to write poetry that stemmed from the very innards of the death camps, of traumatized childhoods, and of hateful words. Words, as corpses, could be nursed to resignification, could be used compassionately, could be washed and taken care of — words could speak to the heavens just as much as they had been used to veritably translate the native tongue of hell.

But a more than fair follow-up question to Célan’s answer, a question that still swirls from within Adorno’s disturbed waters, is: Is comedy possible after Auschwitz? Of course, Auschwitz is the metonymy everyone knows for the word Holocaust, in the same way in which Holocaust is the code word for any possible catastrophe clothed as a final solution; you know, like those that have been winning momentum once again now that totalitarianism and madness have been reinstated as heads of (what posed as) the most democratic state in the world (or so it preached) — terms like “nuclear holocaust,” “environmental holocaust,” “cannibal holocaust,” or, more recently, “orange holocaust.” Metonymy aside, the question stands still: Ss comedy possible after the Holocaust, or, more exactly, after the Shoah?

This is the question that Ferne Pearlstein asks to a range of Jewish voices in her The Last Laugh. From comedy legends, like Mel Brooks or Carl Reiner, to legendary provocateurs, like Gilbert Gottfried or Sarah Silverman, to Holocaust survivors, the film asks this basic question to its subjects, which elicits, naturally, a varying consensus as to which degree this is still an off-limits event for comedy — unreachable and necessarily in bad taste.

Of course, the element of temporal distance, of historical remoteness, is thoughtfully approached by most of the comics who attempt a reasonable response, even a carefully considered justification, to their position and, in many cases, to their acts. A common point of comparison is 9/11, and how off-limits this event seemed (still seems for a portion of the American public) recently after it happened. The comparison, however, although accurate in the feelings that immediately followed the event in the US, is as America-centric (yes, America first) as it can get. It is difficult to put one’s head around the fact that 6 to 8 million people, predominantly Jewish, but also Roma, Lesbians, Gays (to name a few) people were exterminated and, before, inhumanely treated, stripped of their humanity, systematically exposed to the unspeakable for a period that spanned, in many cases, half a decade is in any way comparable with an attack that took place one morning during which two towers (doubtless mighty symbols) collapsed as two airplanes flew into them (and another one into the Western side of the Pentagon, and then another into the ground in Stonycreek Township, Pennsylvania) with almost 3,000 casualties and about twice as many injured.

I am not, to be sure, trying to quantify deaths in order to void what happened on 9/11. My point, however, is that so many genocides had taken place after the Holocaust (Cambodia, Bosnia-Herzegovina, Rwanda, Bangladesh, Burundi, Indonesia, to name a few) and so many peoples had been slayed, persecuted and systematically exterminated since (the Roma people, the First Nations across North America, the Mayans in Guatemala, the Huarpes in Argentina, and the list goes on and on). The fact that none of these conflicts make it to the list when talking about incidents too shameful to laugh, and that 9/11 has to be put side by side with the Holocaust, still bedazzles me. Then again, when thinking about events we do laugh now and were just as sanguinary and senseless, such as the Spanish Inquisition, the comedians point flies loudly and clearly. And then, perhaps this is the best strategy through which an average American can approximate their experience to the experience of others. With the exception, indeed, of some, like those who had gone through true horror, like Renee Firestone, maybe the only protagonist of The Last Laugh, an educator and survivor who very much incarnates the most moderate position possible in the topic. A woman who never lost her ability to enjoy life, or her ability to laugh, or her ability to love. The only voice in the film who actually talks about other genocides and ethnic cleansings going on in the world, and who is able to wisely put in context these atrocities with her feelings after 9/11.

Size matters, however, and scale does make a difference. While in some countries (such as Mexico, as I can well attest) people were making jokes (sometimes very good ones) about 9/11 by 10/11, and found them laughable, the Holocaust as the metonymic genocide of the 20th Century has been a touchy matter pretty much everywhere in the world. In this way, The Last Laugh does touch on something that can be universalized (pretty much as Adorno did) when asking the question about whether or not the main purpose of comedy is to get laughs, and the main aim of laughter is to produce joy — in which case it is, of course, of bad taste to make comedy of any human tragedy, big or small, for, arguably, the trivialization of human suffering is one of the most undignified expressions imaginable by a human being. Entirely unethical.

Pearlstein, nonetheless, seems to be talking to subjects, professionals and audience, who want to go beyond the first layer of comedy. At its best, The Last Laugh touches upon the very nature of funny (or funniness) and distinguishes it from the nature of jokes. Most comics seem to agree with the fact that a joke needs to be funny. In fact, the more problematic its subject the funnier the joke must be. But most of them are clear as well that not everything funny is to be made into a joke. And here is where the least controversial subject of Holocaust comedy appears: As we look at the nature of ridicule.

Hitler, Mussolini, Stalin . . . Trump, we have very few qualms with laughing at them. They are so outlandish in their characters, actions and claims that no joke is needed to make them funny — most of comedy’s main resources (i.e., hyperbole, juxtaposition, synecdoche, simile) are already present in the personas of these people. Often times, all that is needed is to take them out of the context in which they forcefully make sense to see their ridiculousness in all its splendor. Hardly any joke needs to be made. It is enough to confront them with the truth, with the reality they so fiercely fight against to make us laugh at them. And we feel no pity, no shame in doing so. On the contrary, if anything, we feel empowered. That’s the nature of ridicule. It takes away power from the oppressor, if briefly and with very limited effects in reality (people still died, people still suffered). Yet it does feel like a rightful revenge. And yet, despite its limited effect, it does get into the bones of the oppressor, for this is one of the first things they fight against: Satirists and fools are the first purged and/or silenced in authoritarian times.

But what about the oppressed? What about those who suffered? What about the target group, ethnicity, people? What about the event itself, beyond the realm of the perpetrators? This is where consensus breaks in The Last Laugh, and where the film’s originality resides. Unfortunately, as well, this is the point most weakly made.

Likely, the archival material is the treasure that makes this film worth watching. Sadly, the potential that this material had to help move forward its central question is significantly overseen. Watching clips of inmates putting on variety shows at death camps, accompanied by the narration of those who participated, provides our understanding of fun with an insight that is difficult to capture in words — and boy did the participants try! We are able to see that joy does not trivialize tragedy; rather, it makes it bearable. The difference here is that no one is laughing at anything in particular (at the oppressors, at the situation, at the pain, at the suffering, at the oppressed, at the horror), nor is anybody taking anything lightly. What makes all the difference is that they are finding humor inside it all (the situation, the pain, etc.). It is not at and/or about and/or with anyone that they laughed, that we laugh. It is inside.

Alas, Pearlstein is not able to get a grip of this insight and fails to integrate it into her interviews and moreover, into the overall arc of her film. At some point, the mocking-heads she has (prestige and funniness aside) lose our interest (particularly if we love comedy and have followed many of them throughout the years), as we’ve heard what they are saying many times before. This laughing inside does not get to those voices who struggle to articulate why nothing should be off-limits to comedy, but are unable to do so at the face of actually turning it into an argument, or a reason, or even a jibe. Jibes are plenty, for instance, when some of them (i.e., Sarah Silverman or Jeff Ross) hint at the fact that fetishization is a form of trivialization — and that often the victims end up objectified and their suffering fetishized. This point, nonetheless, is more pristinely clear in their acts than in their interviews (these latter entirely dispensable).

Ultimately, the possibilities that the laugh inside insight open (if shallowly explored) by The Last Laugh do offer another angle to the question: Can we laugh compassionately? Always unilateral and divisive, the summit of rationality, rationing, discernment, it would seem as though laughter has no business with compassion. But, when looked more closely, more intimately, we find that tragedy and laughter are two tones for the same sound leading to the same result. If tragedy leads to catharsis and comedy leads to laughter, they both do so by the same means (often meanly): By way of acknowledgement and/or recognition. And no acceptance, no reconciliation, no healing is possible without recognizing our past, and, more importantly, our present . . . and nothing makes us more aware of our present than a good laugh. Our gaping mouths can also be turned heavenward. 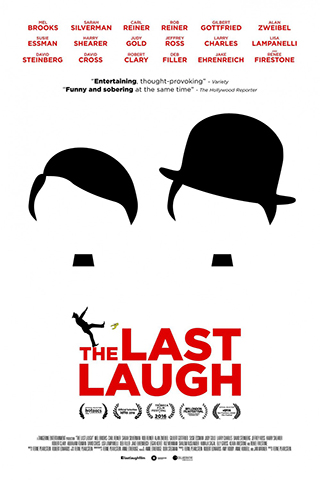