There is a certain tension when it comes to reviewing comedy-horror. Criticize its more risible aspects and there’s an inherent get-out-of-jail-free card in the fact that it’s spoofing that which we usually take seriously. Therefore, what use is serious criticism? And serious Ugly Sweater Party is not. The blooper reel at the end of Aaron Mento’s film serves as a reminder of this. It also highlights how much more fun the cast and crew had making the film than we just had watching it.

A prologue sees Detective Brolin (Brad Potts, “Water for Elephants”) interrogating a suspected homicidal maniac named Declan Rains (Sean Whalen, “Halloween II”). Brolin ends up killing Rains, although not before the suspect has nodded to a bust of Satan, suggesting demonic forces may be at work. Ten years later, stoner buddies Cliff (Charles Chudabala, “Escape from Ensenada”) and Jody (Hunter Johnson, “Bunnyman Vengeance”) are invited by a couple of “slutty” girls to a party in the remote woods. On the way the boys bump into an aggressive homeless man, whom we know to be Brolin. The former detective is carrying an ugly Christmas sweater — a handy coincidence, as the guys need such a garment for their shindig.

Upon arriving at the “party,” Cliff and Jody discover that it’s actually a Bible camp, led by a deranged husband and wife team (Marv Blauvelt, “Sculpture” and Felissa Rose, “The House That Wept Blood”). Their daughters, Susan (Tiffani Fest, “Krampus: The Devil Returns”) and Samantha (Emily Dahm, “From Jennifer”), were the ones with whom Cliff and Jody were hoping to get lucky — but it looks like the ladies’ promiscuous days are over, as they’ve renewed their vows of chastity. There are various other oddball characters at the camp, most of whom will end up fodder for Cliff’s demonic jumper. That’s right, the ugly sweater — known variously as “Sweaterface” and “Sweaterhead” — is possessed, and it is impelling Cliff to harvest souls.

The result is a smorgasbord of fairly imaginative splatter kills. At one point Cliff bites off a guy’s penis and feeds it to him, before drinking the arterial spray from the wound. But the jokes are even gorier. The location is named Camp Mandix, and if that amuses you then there’s a good chance you’ll find value elsewhere. The humor ranges from endearingly irreverent (the continued presence of Rains as a giggling ghost is a neat way to keep Whalen involved throughout) to the dismally cretinous.

There’s a smattering of decent visual gags — like when Father Bottoms (Matt Holbrook, “The Perfect Host”) appears to be drowned in a stream, but he’s actually just searching for his lost wallet following a baptizing — but more often Mento aims depressingly low. The constant stream of gay jokes is particularly tiresome. We’re not even talking wordplay — literally the sight of two men in a suggested homosexual situation is funny, allegedly. Maybe 30 years ago? No, not even then.

Mento visually references splatter maestros like Sam Raimi and Peter Jackson, but the greater mileage is undoubtedly fueled by Troma. This means tacky, trashy and ill-disciplined filmmaking at every level, which is of course the point. The editing is particularly chaotic and nonsensical, even before the evil pullover starts manipulating time. It’s hardly Shane Carruth’s “Primer,” but things get weird, temporally and beyond, and this leads to flashes of inspiration — for example, when the camp counselors lead the gang in a mambo dance.

There is a subplot involving a girl named Hanna (Lara Jean, “Anomaly”), who is a psychic “witch” sent to the camp for cleansing so that her parents might accept her. But don’t worry, even this isn’t taken seriously. Instead, she does a deal with Jody: If he kills the rampaging Cliff, she’ll cure his STI. Somehow.

It’s harmless enough. The only point at which I felt awkward was a scene in which a character romps through the camp on a gun rampage. Given recent events in the US, not to mention the film’s proximity to Paul Greengrass’s “22 July” and Erik Poppe’s “Utøya,” this felt a tad tone-deaf. But in general the film is too stupid and juvenile to offend.

Barely breaking 80 minutes, Ugly Sweater Party doesn’t outstay its welcome, and it’s even shorter when you consider that a good chunk of the runtime is spent on live footage of speed metal band Omicida, whom I can only assume are friends of the director. Their haphazard presence highlights the editorial disorder that informs the film — a film which appears to be intent on pushing boundaries, yet paradoxically comes across as oddly dated in its humor and worldview. One to watch, then, if you yearn for the baser impulses of VHS-era horror. 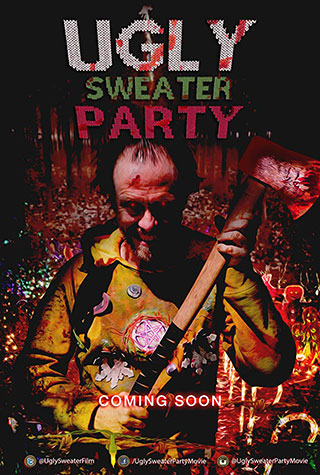