Few franchises have been as financially successful and beloved as the low budget darling that is Leigh Whannell’s “Insidious” franchise. The initial installment, “Insidious” was praised for it’s vintage, minimalist approach and boasted a $97 million dollar box office gross against a $1.5 million dollar budget. It’s balanced execution of claustrophobic cinematography and traditional jump scares set the pace for a new franchise (“Insidious: Chapter 2” and “Insidious: Chapter 3” followed) that reminded audiences of what horror films could be at their core: Films capable of absorbing audiences into a world filled with their darkest fears.

The heroes within all of those films were a group of ghost hunting demonologists led by psychic Elise Rainier (Lin Shaye, “Ouija”) and accompanied by tech specialists Specs (Whannell, “The Bye Bye Man”) and Tucker (Angus Sampson, “Mad Max: Fury Road”) who managed to bring the right spirits back and send the evil spirits away from the Lambert family on more than one occasion.

Unlike the first three films, however, this latest installment, Insidious: The Last Key is almost entirely devoted to this group as opposed to a family in distress. For the first time in the series we’re given the background for Elise’s character who we find suffered abuse from her father (Josh Stewart, “Transcendence”) as a child because of her ability to see and speak to spirits. This initial part of the film arguably offers the most substance of any sequence within the series. It clearly outlines the true protagonist of these films and offers an intimate backstory that is well crafted and presented by director Adam Robitel (“The Taking of Deborah Logan”).

The plot follows Elise and her team after they’re contacted by a man (Kirk Acevedo, “Dawn of the Planet of the Apes”) living in the home that Elise grew up in. The group goes to the home and begins to investigate, which leads to the discovery of an evil entity that has had a hold on not only Elise and her family (bother Christian and nieces Imogen and Melissa make a late appearance), but everyone who’s lived in the home. This results in some heightened anxiety that leads to jump scares and some heightened anxiety that doesn’t, and a lot of frightened and exasperated looks from everyone, anxious or not.

Outside of Shaye’s deepening portrayal (which she can now do impressively with her eyes closed), Insidious: The Last Key doesn’t offer much that the previous films hadn’t already given us, and yet it still manages to be a captivating installment for a franchise that most would not have predicted would have lasted this long. I attribute this to not only Lin Shaye but also to Whannell’s writing which stays on pace with that of the previous installments (with the exception of the increasing comedic blips that mostly fall flat) and the ever-foreboding atmosphere this time dressed up by the cinematography of Toby Oliver (“Get Out”).

Enthusiasts of the series and Blumhouse Productions in general have been given a decent entry to a franchise that has mostly run it’s course. And while one could argue that Insidious: The Last Key fails to offer anything new or exciting to the genre, the movie offers fans of the franchise exactly what they were looking for and that’s — for better or worse — more of the same. 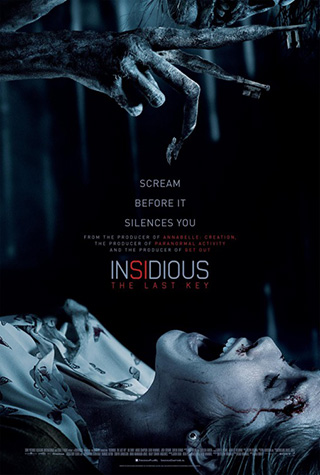