The story of A Woman’s Life (original title “Une vie”) centers around Jeanne Le Perthuis des Vauds (Judith Chemla, “In the Name of My Daughter”). Like most women of her time and place (19th-century France), she exists only to suitably and fruitfully marry. She spends her days reading or playing backgammon with her parents, engaging in superficial distractions to pass the time until a different sort of engagement provides her life with meaning.

The film’s early minutes spent gardening and gaming are pointedly dull and, as such, the introduction of her suitor Julien de Lamare (Swann Arlaud, “The Man Who Laughs”) is a welcomed excitement to Jeanne and the audience alike. Jeanne, instructed by her father while planting seeds to “keep in line with those in front” (a sentiment that can also be applied to her subsequent marriage), is filmed almost exclusively in tight close ups. She is mostly profiled in profile with half her face — and her identity — hidden from view, as if to imply that she is not fully known to others or perhaps those in her life are simply uninterested every facet of her. The film pushes against this idea, just as Jeanne learns to push against her station and circumstance. Director Stéphane Brizé, with assistance from cinematographer Antoine Héberlé, lingers on Jeanne’s face. With their interest piqued, the film successfully delivers a multi-faceted character to the audience — one full of emotional depth and complexity — while maintaining the singularity of her role as wife (and later mother) to those around her.

Jeanne’s singularity is further strengthened and subverted by the film’s focus on opposing forces and ideas in conflict that auspiciously collide like a mallet to a croquet ball. The most obvious duality exists between light and dark. There are the dark candle lit rooms of her frigid house juxtaposed with the soft, natural light of the outdoors (the film’s Normandy is always blessed with perfect weather). These same forces are at work in their games of backgammon, a game played by two players on two sides. One is light and the other dark. Action and inaction; past and present; truth and lies; love and marriage; men and women are arguably constructs without inherent meaning and defined by their opposite or the presence of their counterpoint in another. To that end, Jeanne is defined by her relationship to others. She is a daughter, a wife, and a mother. Until she isn’t. Until she exists and persists without these counterpoints.

An undercurrent of homoeroticism is detectable between Jeanne and the other women in her life. She is bathed and dressed by her maid, Rosalie (Nina Meurisse, “I Am a Soldier”). She playfully fights and frolics with her friend, Gilberte (Clotilde Hesme, “Chocolat”). Later, when critiquing the latest fashions of the day, Gilberte opines Jeanne would look particularly nice in a red frock. She concludes, “you’d have to see head on, not in profile.” Gilberte’s pronouncement is a nod to the fact that Jeanne rarely, if ever, is observed head on. Half her face is usually hidden, but these women truly see Jeanne. They shower her with an attention and intimacy that eludes her romantic relationship.

The main action centers around Jeanne knowing someone else’s secret and reticently revealing that truth during a pseudo confession with a priest. She is not one of the bad actors, but seeks absolution nonetheless. The priest chastises her for lying by omission. Jeanne is assigned blame and shamed for her husband’s misdeeds (still an all too common refrain). The priest urges her to come forward with the truth. “Lies are sons of darkness and you are daughter of light.” Jeanne counters she cannot act and provoke a disaster. In the end, she does out of shame or guilt, not her own agency. There is a passivity to her act. In fact, most of the choices made by women in A Woman’s Life are intimated by men. Men who implore them to speak out when suitable and to otherwise stay silent. Throughout the film, the main plot points occur off screen as dialogue only, anchored by shots of Jeanne idle and contemplative, which further amplifies her inaction and lack of agency.

When Jeanne’s son is sent away to school and accused of spending too much time outside, she comes to his defense and effectively her own: “He needs to run and be in the open air.” Outside, picnicking with her husband and swimming in the river, is where she is happiest. Another instance of light prevailing over darkness. These sequences of an indeterminate time and place — often played as flashbacks or mere memories during her darkest days — are intercut with her present and take on a daydream-like quality, especially stark in comparison to the nightmare her reality has become.

Brizé takes care to not explain too much. There is little dialogue (subtitled in English), with exposition coming from correspondence read aloud and interiority bolstered by poetry and prose. When something shocking and tragic occurs, it is revealed quickly with glancing images and brief explanation. The moment hits the audience at an angle rather than with its full force head on. A Woman’s Life can feel a bit slow and tiresome at times, but such is a woman’s life. And it is never as good or as bad as you think. 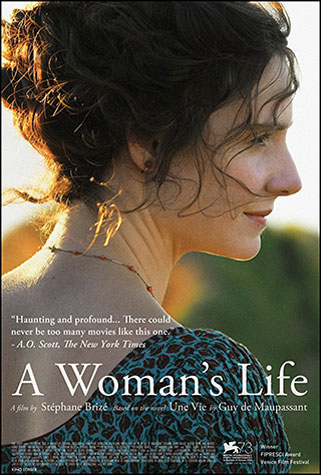