Dawson City, British Columbia is a place where dreams began and dreams ended. Located about 350 miles south of the Arctic Circle, Dawson City was established in 1896 with 3,500 residents and was home to the native Hän speaking people who lived along the Yukon River, harvesting salmon and hunting caribou. As boatloads of gold prospectors arrived from San Francisco and Seattle in 1897, the Native Americans were forced off their land and “relocated” to Klondike City. What happened in between the city’s heady gold rush days and its demise has been documented by Bill Morrison (“The Great Flood”) in his fascinating film Dawson City: Frozen Time.

Rescued from 533 nitrate reels of film buried for decades beneath an ice rink in Dawson City, Morrison put together a treasure trove of silent films, newsreels, travelogues, and sports footage spanning from 1897 until the 1970s, films once thought lost forever. There is no narration in the film, only subtitles flashed on the screen as unobtrusively as possible along with an insistent score by Alex Somers (“Captain Fantastic”), but it is the images that tell an American story of the connection between money, politics, and entertainment, a connection that brought fame and wealth to some and obscurity to others.

Among the names we recognize who stayed at one time or another in Dawson City were Hän Chief Isaac, Jack London, Fred Trump (Donald’s grandfather), Eric Hegg as well as Sid Grauman, Tex Rickard, Klondike Kate, Alexander Pantages, Philadelphia Jack O’Brien, Fatty Arbuckle, Daniel and Solomon Guggenheim, Robert Service, and William Desmond Taylor, names that later became famous in Hollywood. Though the discovery and restoration of the buried reels by Yukon historians Michael Gates and Kathy Jones-Gates took place in 1978, it was not until 2013 that Morrison met with Paul Gordon, film conservator for Library and Archives Canada who agreed to share the collection with a wider audience.

Through the magic of the silent films, we see images of the city turned into a haven for adventurers seeking gold and entertainments in brothels, gambling halls, and theaters. Among the titles bearing witness were “The Frog,” “The Birth of a Flower,” “A Trip Through Palestine,” “The Recoil,” and “Polly of the Circus.” Even more revealing of the old mindset are such titles as “The Half Breed,” “The Female of the Species,” “The Hidden Scar,” and “The Unpardonable Sin.” We see the discovery of gold in Nome, Alaska in 1899 which siphoned off a chunk of Dawson City’s population, the end of gambling and prostitution in 1901, and the building of the DAAA, the Dawson Amateur Athletic Association in 1902.

The DAAA was an entertainment center that included a swimming pool, a hockey rink, billiards, boxing and handball and which began showing films that had been brought to Dawson City after having been in circulation for several years. For the reels of film, this was the end of the line. Too dangerous and expensive to return, seventy five percent of the films were lost in fires, purposely burned, or thrown in the Yukon River. The remainder was dumped in the DAAA pool by an employee of the Canadian Bank of Commerce which managed the films.

The burial was made in order to smooth out the ice rink and the reels remained packed in permafrost for fifty years. It was these that were found in 1978, many of them well preserved under the ice, others in various states of decay. In the clips, some that only last a few seconds, Morrison demonstrates through visual poetry how the patterns of deterioration can add themselves to the beauty of the experience.

Among the discoveries was footage of the rigged 1919 World Series, the series commonly known for the infamous Black Sox scandal which Morrison unfortunately seems to justify by pointing out that the players were bound to one team (Reserve Clause) and could not use their performance on the diamond to increase their earnings.

Dawson City: Frozen Time is also not without politically relevant material. Newsreel footage is shown of the 1914 Ludlow Massacre in Colorado where 24 of the 1200 miners on strike against the Colorado Fuel and Iron Company owned by John D. Rockefeller were gunned down by the Colorado National Guard. Judge Kenesaw Mountain Landis, the first baseball commissioner hired to prevent any more Black Sox scandals, used his power to deport socialists who protested World War I and the murder of the miners in Colorado. There is also footage of a black protest parade, and some few words of choice from the corrupt Mayor of New York, Jimmy Walker.

Dawson City: Frozen Time is a snapshot in time of a people thinking big and taking risks, some sadly at the expense of those who had lived there for thousands of years. It is a reminder of an age that has passed, but one whose ramifications have not. 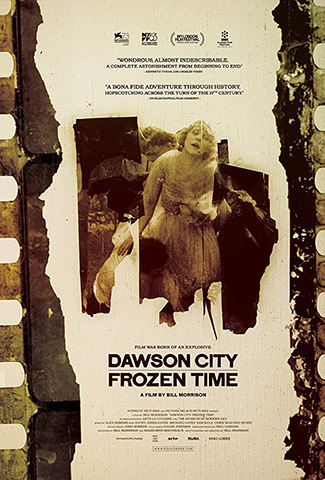