Pitch to Hollywood studio stooge: “You see, I’ve got this idea to do a film about a real life event, except the film will only feature about ten minutes of the real life event, as a sort of ‘in’ to get the suckers to come and drop ten bucks. Meanwhile, what we’ll do is make a trite and pale copy of a 1940s film noir with a bunch of B-level actors uttering the most clichéd phrases left out of Edward G. Robinson film.”

Hollywood hack: “Sounds great. How much do you need? Will thirty, forty mill suffice?”

The above is what is called a ‘dramatic re-enactment’ of what surely had to occur for Brian De Palma’s 2006 film, The Black Dahlia, to be made. There’s no other way that this horror show of a film could have gotten greenlighted, unless De Palma is a perv who skulks around studio offices at night, videotaping assignations between executives and starlets. This is because the film is bad, very bad, almost “Titanic” level bad. Perhaps only the lack of a cheesy Celine Dion ballad saves it from that depth.

The problems with this two hour (although it felt like ten- in fact, originally the film was to be a television miniseries) film are all over, from the absurdly bad script adapted by Josh Friedman from James Ellroy’s 1987 novel of the same name. There is no characterization of depth by the actors, no dialogue that isn’t a riff on bad Hollywood films of the 1940s, rather than reality, and even the special effects are bad — such as blatant miniatures for the old Hollywoodland sign’s area. Ostensibly, the film should be about the real life unsolved murder of a wannabe actress named Elizabeth Short (Mia Kirshner), whose death was dubbed The Black Dahlia case by the media. Her 1947 murder and mutilation has inspired many fictive riffs, and this film is one of them. The actress who plays Short is seen only in flashbacks and screen tests, and the main characters are all fictional — two LA detectives who were once boxing rivals, Dwight ‘Bucky’ Bleichert (the wooden Josh Hartnett, whose character monotonously narrates the tale in voiceover) and Lee Blanchard (the hit and miss Aaron Eckhart), who form part of a love triangle with Kay Lake (Scarlett Johansson), an ex-hooker Blanchard took up with after putting away her former pimp and boyfriend.

Here is where pointless digressions and plot twists add up. It seems Blanchard was a dirty cop, who was blackmailing a wealthy LA contractor, whose daughter, Madeleine Linscott (Hillary Swank, with a weird accent, and in another role that questions how in the world this woman could win two Oscars — okay, PC, I know), is a part-time lesbian, who turns out is the murderer of Blanchard, who got obsessed with the Dahlia case because his sister was murdered, which also explains his affections for Kay Lake. Why would Madeleine kill Blanchard? Because of the blackmail, and the fact that her father was a pornographer (aka a stag film maker, back then) who’d forced Short to do a lesbian film with another girl, who uses a Popsicle as a dildo on her. Apparently, Madeleine’s socialite mom (Fiona Shaw), who is crazy after years of her husband’s philandering and sexual perversions, followed him to the place, under the Hollywoodland sign, where they shot the stag film, and killed the Dahlia in a fit of rage, then allowed her gardener to dismember the body. Why? Who knows, it just is an excuse for the actress to chew some scenery. She then kills herself. And all this is confessed because Bleichert decides to shoot up some of the rich folks’ artwork when he catches Madeleiene and her dad in an incestuous embrace. Bucky then tails Madeleine, and somehow connects the dots that she killed Blanchard — although how is a mystery since all of these revelations are so labyrinthine that they are all forms of a deus ex machina. He then plugs her between the eyes when she admits to the murders, and says that he hasn’t the balls to kill her, because he’d rather fuck her than kill her. The film then ends as Bucky returns to Kay Lake, presumably for a happily ever after sort of ending.

Now, does any of this involve you enough to want to see The Black Dahlia? I thought not. Perhaps the only passable element of the film, shot in a 2.35:1 aspect ratio, is the sepia-tinged cinematography by a slumming Vilmos Zsigmond (who shot such films as “Deliverance,” “McCabe & Mrs. Miller” and “The Deer Hunter”). The use of 1940’s wipes and irises is also a plus for the film’s style. The film score, by Mark Isham, however, is over the top and inappropriately leads the audience by the nose. The Universal DVD is also lackluster, lacking a commentary, and only having a making of featurette, behind the scenes stuff, and a hagiography of De Palma.

The film fails primarily for the reasons most bad films do — no screenplay of quality, and not because it is fictional and not about its titular subject, although a bit of fidelity to the real case could not have hurt. That said, even had the film been well acted, it is so convoluted and off subject that it bores, despite a plethora of needless narrative convolutions (see above), bad attempts at symbolism (Blanchard and Bleichert are known as Fire and Ice), shocking twists (when Blanchard is killed, his body is cremated in the building he died in by a gangster — why?), dull and pointless subplots (too many to enumerate), red herrings (again, too numerous), camp (Bleichert laying Kay on the kitchen table, after ripping away the tablecloth and dishes, or wearing his fedora in bed with Madeleine), loose ends (as if his shooting of Madeleine, a socialite, would not generate more press than the Dahlia’s murder ever did), and ‘unexpected’ revelations (again, too many). What part of this mess lies with Ellroy’s book (whose earlier book, “L.A. Confidential,” was turned into a truly great film ten years ago, by Curtis Hanson), and how much blame belong to Friedman and De Palma, is unclear, but one wonders how De Palma (always a lightweight compared to contemporaries like Martin Scorsese and Francis Ford Coppola) ever even got tagged with the label that he was Alfred Hitchcock’s heir apparent (at best) and imitator (at worst). Regardless, after an atrocity like this, the dead fat man may be rising out of his grave to smite De Palma — that would make for a better film, actually!

His most famous films — “Scarface,” “Carrie,” “Body Double,” “The Untouchables,” “Carlito’s Way” — are all either campy messes, imitations of his better peers and classic films noir, or films that try to be noirish mysteries, and while The Black Dahlia is not as bad as Johnny Depp’s Jack The Ripper film, “From Hell,” it’s close. Too many details without relevance, payoff, or purpose sink the movie, and its insistence on imitating 1940s films rather than reality (which includes a focus on its titular subject matter) buries it even more deeply. Yes, Scarlett Johansson looks good, but other than her piece of eye candy (Swank, by contrast, has always looked butch), the film has little else going for it, so move over, “The Bonfire Of The Vanities,” there’s a new contender in De Palma’s pantheon of bad films, and this one’s . . . oh, to hell with it. This review is done. 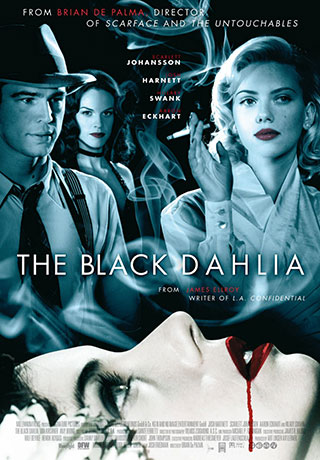