Despite the way Wonder Wheel crashed and burned during the awards season, I figured it had potential due to it being a Woody Allen production. Although Woody’s a crapshoot for me these days, I never put much faith in the critical consensus around his recent movies (plus this one is about 1950’s Coney Island as shot by Vittorio Storaro, which sounds amazing enough to me to forgive a Justin Timberlake casting).

But man oh man, Wonder Wheel is execrable — quite possibly the worst movie Woody’s made . . . ever. It’s like Woody parodying himself or Woody finally doing something that suggests he really is as lazy as he often self-deprecatingly accuses himself of being. He seems tired as well. The dialogue has lost all its snap, the performances are caricatures instead of fully formed homages to classically melodramatic characters, and the whole thing plays out like an old man starting to talk about how much he loves Eugene O’Neill and then falling asleep before he can finish his sentence.

Simply stated, Wonder Wheel is just a lifeless, meandering movie that makes fools of its bad actors while wasting its good ones. Jim Belushi’s whole performance is him yelling “Christ!” and slamming his hand on a table or whatever. Timberlake (“Inside Llewyn Davis”) is embarrassing and fully out of his element and his narrated asides delivered directly to the camera are painfully awful. Kate Winslet (“The Mountain Between Us”) is . . . I don’t even know. She’s not good, but she has moments that appear to have some truth in them, so maybe it’s not a total bust. I think she’s very talented, but often her idea of a theatrical over-the-top performance seems very mechanically calculated.

In this regard, she’s very different than Cate Blanchett, whose theatricality is meaty, robust, and deeply convincing. It might have a shade of calculation as well, but I always believe in the character she creates, especially in “Blue Jasmine,” whereas Winslet’s Ginny strikes me as several layers of try-hard fakeness. It’s Winslet playing an exasperated woman playing the part of a waitress, according to the character or Woody or whatever, but it just feels like a rubbery shtick every time she tries to capture how exasperated she really is. It’s a lot of “Oh God! Oh God!” and “I have a headache!” put on repeat. Her lack of chemistry with Timberlake doesn’t help matters, since that’s such a key part of her arc.

Juno Temple (“Far from the Madding Crowd”) might fare best of all as Carolina, a girl looking for a fresh start, but that’s probably because she has the least histrionics of the main characters and she’s clearly got several legs up on Timberlake in the general acting department. She’s fine here, but not very memorable or interesting, either.

The cast and characters often make or break a Woody Allen picture, so Wonder Wheel is at a disadvantage already because the story is thin stuff — trying to be a showcase for Ginny’s big arc instead of anything else, except the arc falls flat and we’re left with nothing more than the pretty imagery of Storaro’s photography. And it certainly is pretty in a bright, garish sort of way, a far more colorful Woody Allen movie than most of his works and a relatively expensive-looking affair at the same time. Unfortunately, the whole movie is stuck in this self-absorbed corner of “The Twilight Zone” where it’s convinced that it’s really a stage play and that no one in the audience will get that it’s really a stage play, so every aspect of the movie has to keep reminding us that it’s really a stage play at heart. This includes the apartment set, which often shows actors coming and going in wide shots that always remind us how much of a set this is, with the digital Coney Island backdrops visible through the windows and the way that the camera almost always points in one direction, suggesting that the rest of the apartment set is nonexistent. This isn’t a big deal on its own and is obviously something done quite regularly in movies, but there’s something over-the-top about how stage-like the many apartment scenes are.

The performances follow suit, often playing it loud for the cheap seats in the back, rarely ever utilizing the possibilities of intimate engagement between characters that cinema has in its natural arsenal. And Storaro’s photography falls a bit gratingly into this category as well. He so often has these overpowering lights blasting down on the actors from above in a manner that is so exaggerated it can only be explained as an effort to recreate the look of stage lighting. The whole movie has this bright, celestial glow (even a rainy afternoon is lit as though God himself is shedding tears of gold) and it just looks somewhat ridiculous after a while. It’s still a good effort to give Woody what he obviously wanted (popping colors of the Technicolor age WITH STAGE LIGHTING!!!), but the core concept of it is over-the-top by nature and the execution is as blatantly in your face as it could possibly be.

Also, in terms of the plot, this has to be the umpteenth time that a Woody Allen movie features a protagonist somehow participating in the death of a character for the protagonist’s perceived personal gain and it’s getting really old at this point. This is the most ridiculous use yet, with exasperated Ginny just randomly, out of the blue, deciding that letting Carolina get whacked is going to work in Ginny’s favor. She tries desperately to save Carolina before that and then just suddenly changes her mind, thinking that she can somehow reunite with her boy toy if his crush is out of the picture. It’s a preposterous twist that turns Ginny into even more of a joke than she already was. Her pain and desperate desire to break free of this life, which is the root of all her motivation throughout Wonder Wheel, is completely trivialized by Woody’s insistence that he once again trot out his beloved joke about how a little murder will solve all our problems. That he then follows that up with Timberlake’s Mickey magically figuring out that Ginny purposely chose to not save Carolina, thus ensuring that Ginny has no hope of getting back together with Mickey, is the icing on this rancid cake. 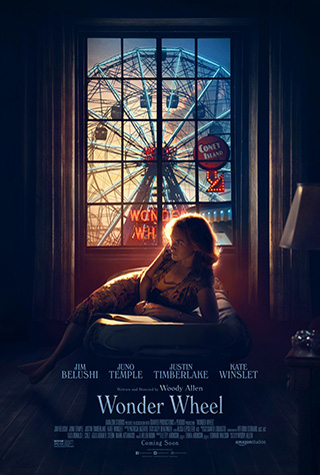