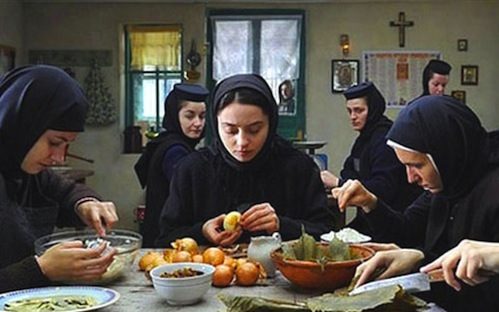 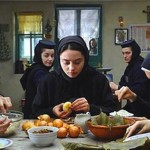 Albert Camus said, “The evil that is in the world almost always comes of ignorance, and good intentions may do as much harm as malevolence if they lack understanding.” These words become prophetic in Romanian director Cristian Mungui’s Beyond the Hills, a powerful tale of religious and emotional obsession that leads to tragic consequences. Like his award winning abortion drama, “4 Months, 3 Weeks and 2 Days,” the Palme d’Or winner at Cannes in 2007, it is deliberately paced and can be demanding to the viewer unaccustomed to long takes without cuts or camera movements. Set in a remote Orthodox Christian convent in rural Moldova known as New Hill Monastery, Beyond the Hills is a social drama based on two books labeled “nonfiction novels” by Romanian journalist Tatiana Niculescu Bran concerning an exorcism in 2005 that became sensationalized in the press.

Filmed in -15 degree weather during the heaviest snow season in years, Oleg Mutu’s cinematography makes us feel the bleakness and the cold, damp air inside a convent that has no electricity or running water. As the film begins, Alina (Cristina Flutur) has returned from Berlin to the town in which she grew up. She is met at the train station by Voichita (Cosmina Stratan), her best friend and partner since their years together in an orphanage. Voichita believes she has found her direction, however, in the convent where she is a novice and has become emotionally attached to the priest she calls “Papa” (Valeriu Andriuta) and the mother superior (Dana Tapalaga).

Alina, a sometimes believer, has come to rescue her friend from what she feels is the church’s domination and is unprepared for Volchita’s unwillingness to leave with her and work together on a German cruise ship. She tells Alina that she has found a sense of family and has been changed by her experience. Though she lovingly invites her friend to give herself to the Lord, Alina feels betrayed. A tug of war develops between the church’s fear of the “unbeliever,” and their wish to provide sanctuary, knowing that Alina has nowhere else to go. Under threat by those around her, Voichita finds herself torn between her one and only friend and her devotion to God.

Desperate for affection, Alina flirts with suicide and her growing paranoia makes her suspicious of everyone in Voichita’s life. Soon, her repeated fits of hysteria land her in the local hospital, but the anti-psychotic drugs provide only a temporary solution. When the doctors tell the priest that there is nothing further they can do to help, Alina is returned to the convent but the situation does not improve. The distraught girl does leave on her own to go back to her last foster home, but gives up all her possessions and returns to the monastery, unable to stay away from Voichita. 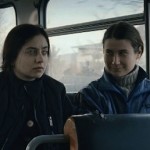 Ultimately, the priest is convinced that she is not just a sinner, but one possessed by the devil and must undergo an exorcism. Without her consent, Alina is tied to a cross with ropes and chains and her mouth gagged to prevent her screaming as the service is performed. Beyond the Hills is an intense and haunting film, and the performances of Flutur and Stratan, who shared the Best Actress award at Cannes, add depth and complexity to the film’s moral universe. Under Mungui’s direction, the film avoids pointing the finger. There are no good guys and bad guys and everyone involved thinks they are acting in Alina’s best interests, but they are sadly myopic.

Regardless of their good intentions, each character is so caught up in the narrow scope of their vision that they cannot see beyond their immediate self-interest. What becomes lost is the ability to look beyond rituals and forms to find the substance — love, charity, and compassion. According to Mungui, Beyond the Hills “speaks about guilt but is more concerned with love and choices, with the things people do in the name of their beliefs, the difficulty of telling good from bad, understanding religion literally, indifference as an even greater sin than intolerance and freedom of will.” When these factors are present, tragedy cannot be far away. 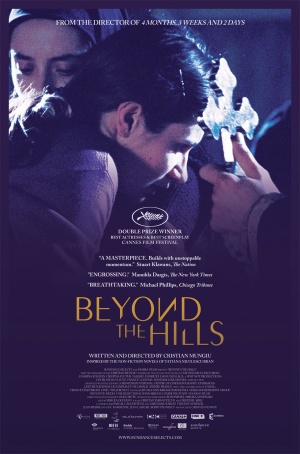