Films centering around the American military generally fall into two camps: Pro-war and anti-war. The U.S. military will always be a subject of extremely dichotomized opinions and, as such, films revolving around a soldier will generate polarizing reactions depending on its approach and on an individual’s personal beliefs. Where Birthday lies between these opposing sides is up entirely to the viewer. While director Chris King has served in the army between late 80s/early 90s, the former soldier has explicitly expressed his desire to create a film which honors America’s wounded veterans instead of focusing on the military itself. To its credit, while considerably short in length, the film offers a touching sentimentality which it earns by feeling both authentic and deeply sincere.

The narrative is simple but effective. As a marine (Chris Gouchoe, “Freaks of Nature”) and his wife (Mandy Moody) talk over webcam about how long until he returns home, we know a tragedy is soon to afflict the young couple. After tripping a landmine, the marine finds himself back home with both his legs and an arm lost from the incident. The reunion between the young couple proves bittersweet and while they face new challenges both personally and together, the marine and his wife find the hope to carry on and live their lives normally again.

For the length of ten minutes, there’s very little else to the film’s story yet so much is said that it needn’t use any more time. Very little dialogue is exchanged, but the emotional points of each scene come through the quiet, expressive moments of vulnerability, compassion, and love. It’s a far more effective and efficient way of telling this kind of story without allowing the political undertones which surround the narrative to weigh everything else down. As a result, the short becomes a far more resonating experience than most films strive for in a feature-length running time.

Birthday isn’t simply a war film, but a film about learning to cope with a disability. The film is told primarily through the wife’s perspective, allowing viewers to learn as she does, but that doesn’t mean that the story is entirely her own. It’s important that the first scene shows the young couple talking to one another as it tells us this is both their story. There’s a fantastic sense of authenticity when the marine arrives home and his wife tells him nonchalantly of the newly installed facilities to help him perform basic tasks. A palpable silence fills the room that expresses an underlying pain to the new and unfortunate circumstances that neither character wishes to address directly.

That doesn’t make Birthday a melancholic film as it is about learning to move on while supporting one another through recovery. It’s certainly been a positive experience for most audiences, being a continual crowd pleaser in places such as Sedona International Film Festival and Tribeca Film Festival, among many others. But key to the film’s charm is how it treats disability. The film never condescends to the marine’s physical afflictions or treats him as someone who everyone should feel sorry for. Again, the brilliance of its minimal dialogue makes its exploration of disability a much more subtle representation than what usually is shown from a Hollywood film examining a similar subject. Chris King exhibits a lot of passion for getting the story to feel as realistic as possible both emotionally and psychologically. While it is certainly sad to know Birthday failed in its crowdfunding goals three times, it’s equally uplifting that Chris King achieved what he set out to do to such great success. 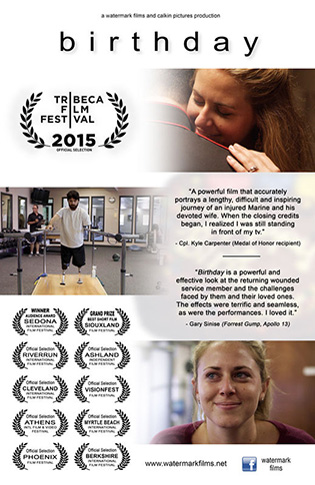