It was bound to happen. Halle Berry and Bruce Willis were at some point in time going to cross paths in a movie again. The last time it happened was in the lackluster “The Last Boy Scout” way back in 1991 when both were rising stars. Now in their prime (some may even say the decline) of their careers they reconnect with Perfect Stranger. The question of course is, should they have bothered?

Perfect Stranger is a story about an investigative reporter, Rowena (Halle Berry), who begins to dig into the goings-ons of a wealthy and powerful advertising executive, Harrison Hill (Bruce Willis), whom she suspects for murder. This is because her friend Grace (Nicki Aycox) was unceremoniously dumped by Hill and was soon thereafter found brutally murdered. To aid her in her endeavor of fact finding, Rowena elicits help from her hacker and tech geek friend, Miles (Giovanni Ribisi), while delving into the online world of dating and sex chat. Yeah, I know the plot sounds a bit quirky, yet it almost pulls it off. Here’s why.

The actors are cast to their strengths. As usual, Bruce Willis plays the part of the pompous, egotistical, no emotion character exceptionally well. After all, he’s been portraying these character types for years (see “Sin City” and “The Fifth Element”). Giovanni Ribisi, once again finds himself playing a strange, outsiderish, yet highly motivated person (see “Boiler Room” and a few episodes of “Friends”). And of course who can forget the incredibly beautiful Halle Berry? Although she has done much better work (“Monster’s Ball”), Ms. Berry manages to do a believable job on an otherwise forgettable role. With the correct pieces in place it is almost enough to overshadow a relatively boring movie.

My main problem with Perfect Stranger is the slow, methodical pace at which it is told. There are far too many scenes where Rowena is sitting in front of a computer participating in some of the most boring sex talk I’ve ever seen. These scenes are meant to spotlight Hill’s infidelity and unmask the underground culture, but instead it drags the movie to a near standstill. And while everyone in the civilized world is aware of Berry’s sexiness, I found the moments of her getting dressed (bare back and leg shots) forced and — dare I say — unneeded (it hurt like hell to say that). It was almost as if the director (James Foley) felt the movie wouldn’t stand on it’s own merits and he needed to add a few gratuitous flesh shots. I’m a firm believer, if you’re going to show it — show it. Navel shots aren’t intriguing, they’re frustrating, especially when they don’t add any flavor to the stew.

As for the final verdict, Perfect Stranger isn’t as bad as it could have been or as good as it should have been. There are many developments throughout the movie that are rather easy to deduce. Luckily, the final plot twist provides an unexpected, albeit far-fetched, finale that makes up for the rest of the humdrum. With the plethora of thrillers already in theaters and scheduled for release this year, Perfect Stranger is an easy movie to skip, unless the draw of Bruce Willis or Halle Berry is too strong to resist. And if that is the case, what I say doesn’t matter to you one little bit. 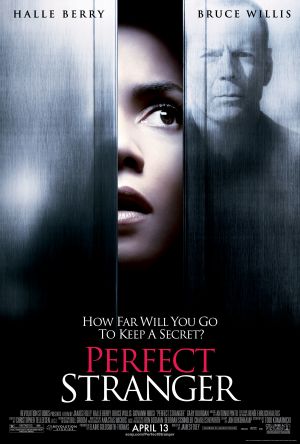