Loosely based on Shakespeare’s “Henry IV: Parts 1 & 2,” and “Henry V,” David Michôd’s (“Animal Kingdom”) epic medieval drama The King lacks the Bard’s poetry and soaring eloquence, yet its intensity, intimacy, and brooding power will keep you captivated throughout its 133-minute run time. Co-written by Michôd and Joel Edgerton (“Boy Erased”), the film is marked by the convincing performance of Timothée Chalamet (“Beautiful Boy”) as Prince Hal, later King Henry V, whose growth from a rebellious and “uncourtly” teenager into a king who commands respect and even fear is astonishing. Though the film departs from the Shakespeare play and the historical record, it is easily the equal of the “Henry V” films of Laurence Olivier and Kenneth Branagh in its ability to probe the depths of the royal mind.

The King opens in court. Hal’s rage against his father King Henry IV’s (Ben Mendelsohn, “Robin Hood”) obsession with internal wars in Scotland and Wales has caused him to leave the royal court and associate with John Falstaff (Edgerton) and his friends in the Eastcheap tavern. Unlike the cartoonish buffoon of Shakespeare’s play, however, Falstaff is the king’s trusted adviser and honest friend as well as a man of reason and deep military experience, serving to later remind the king of the ideals he espoused as Prince Hal. Though Hal’s defeat of Henry Percy (Hotspur) (Tom Glynn-Carney, “Tolkien”) in a sword fight saves his father’s throne, his worthiness to become king is questioned by the dying King Henry IV who anoints Hal’s younger brother Thomas of Lancaster (Dean-Charles Chapman, “The Commuter”) as his successor.

In the opening scene of the Shakespeare play “Henry V,” the Archbishop of Canterbury says “The breath no sooner left his father’s body, But that his wildness, mortified in him, Seem’d to die too.” When his father dies and Thomas is killed in Wales, Hal becomes King Henry V. As if the title brings with it a mythical power, Henry is transformed into a philosopher-king, more than ready to prove his right to rule. Determined to avoid patriotic wars, the new king ironically finds himself immediately embroiled in one. After an alleged assassination attempt and an insult by the Dauphin of France (Robert Pattinson, “High Life”), Henry is ready to go to war with France.

In the stirring epic battle at Agincourt in October 1415, immortalized by Shakespeare, the English soldiers are heavily outnumbered by the French led by the cocky Dauphin who taunts the monarch in a dubious French accent by saying, “I enjoy to speak English. It is simple and ugly.” King Henry, however, relies on Falstaff’s masterful military mind to win the battle against overwhelming odds, turning the conflict in his favor by use of his long-bowmen. Empowered by the cinematography of Adam Arkapaw (“The Light Between Oceans”), the costumes by Jane Petrie (“Suffragette”), and the relentless score by Nicholas Britell (“If Beale Street Could Talk”), the horrors of war are conveyed with graphic authenticity.

Considered by some modern critics as a reckless warmonger, in Michôd’s vision Henry V is the personification of England’s triumph over internal dissension and foreign threats. The film, however, does not glorify war or turn it into poetry to inspire the troops. Here there is no battle of Harfleur with the stirring exhortation, “Once more unto the breach, dear friends, once more; Or close the wall up with our English dead,” nor do we see the young king wearing a disguise to survey the troops opinions about whether or not the king’s goals are justified.

What we do see is Henry not only winning the battle but gaining the hand of French King Charles VI’s daughter Princess Catherine of Valois (Lily-Rose Depp, “Planetarium”). The outspoken princess boldly tells the English king that “All monarchy is illegitimate” and causes Henry to question his rationale for starting the war. In spite of England’s success on the battlefield, however, Henry is an ambiguous figure whose manner of wielding power has raised questions as to whether he was a ruthless oppressor or a great liberator.

Though it was within the rules of war in the fifteenth century, not a second thought seems to have been given to the order to put prisoners’ heads on spikes, or to murder hundreds of French prisoners ostensibly because a number of English page boys were killed. Whatever our ultimate view of the character of Henry V is, it need not deter us from appreciating The King, a remarkable achievement and a big winner for Netflix. 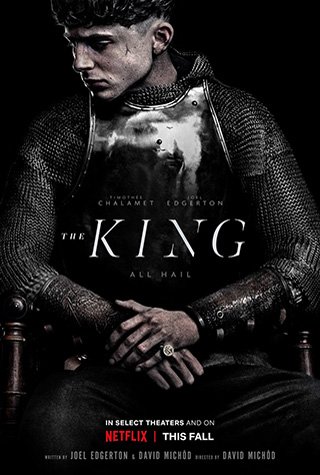