Is Le Mans ’66 (also known as “Ford v Ferrari” in the U.S.) about racing? It’s a question comparable to “Is ‘Jaws’ about a shark?” or “Is ‘Tinker Tailor Soldier Spy’ about espionage?” Certainly racing features in the film, leading up to, as it does, the 1966 Le Mans Grand Prix, as well as other races such as Daytona. Racers are prominent characters within the film, most significantly Carroll Shelby (Matt Damon, “Suburbicon”) and Ken Miles (Christian Bale, “Hostiles”). And it features some pretty intense racing sequences, which might confirm suspicions about racing drivers being more than a little bonkers.

Amidst all the exhaust and engine oil though, Le Mans ‘66 is more interested in friendship. Shelby and Ken (as they and everyone else refers to them) have a long-established relationship that incorporates respect and admiration, frustration and antagonism. When Ford Motors, in the form of Lee Iacocca (John Bernthal, “The Peanut Butter Falcon”) representing Henry Ford II (Tracy Letts, “The Post”) approach Shelby with the goal of manufacturing a Ford car that can outrace a Ferrari, Shelby’s insistence is that Ken, his British friend, professional racing driver and struggling mechanic, be the man behind the wheel. From here, a narrative stretches over several years leading up to the eponymous race, with difficulties both human and mechanical getting in the way.

Director James Mangold has a good history with character-based dramas, especially those that feature men troubled by past events. From the alcohol-fuelled problems of Johnny Cash (Joaquin Phoenix) in “Walk The Line” to the aged and pained Wolverine (Hugh Jackman) of “Logan,” Mangold knows how to frame pain and put it up on the big screen. Notably, however, while Shelby and Ken are clearly troubled, histrionic grandstanding does not overwhelm the drama and the emphasis is upon camaraderie, both between these two and the rest of their team that build the racing Ford. The two central performances are imminently likable: Damon takes his character’s Southern accent and turns it into comfortable determination rather than lackadaisical relaxation. Bale is even better, as his role allows him to do two things he doesn’t often have a chance to do: Speak with a British accent, and be funny. Ken’s sardonic wit and lack of patience for fools provide extensive humor, and his banter with Shelby is given room to breathe and create an amicable atmosphere. This is crucial to the success of the film, as the viewer is invited to engage in the relationship of these two men and thus engage in their endeavor to create what seems like an impossible vehicle.

With so much emphasis on the central duo, the other characters are somewhat short-changed. Most glaring is Ken’s wife Mollie (Caitriona Balfe, “Money Monster”), who demonstrates great chemistry with Bale, but is largely relegated to the position of wife and mother, supporting her husband no matter what while also being concerned for him. Mollie’s role is neatly encapsulated during a scene in which she takes a seat on her front lawn to watch the two men fight, demonstrating that that is what she does: Observe the guys do their thing. Granted, the fight is itself quite funny, not least because it is less reminiscent of Jason Bourne fighting Batman as it is of Hugh Grant and Colin Firth scrapping and flailing in “Bridget Jones’ Diary.” While the focus of the scene, and the film as a whole, is on the men, and considering the period and the true story upon which the film is based, it is logical and consistent for Mollie to be supporting, it seems a little retrograde these days to see a film with little development for its only significant female character. But perhaps the very noticeability of this aspect of the film is itself a sign of change.

In terms of its historical context, Mangold and his production designers do a fine job of evoking the mid 1960s. Obviously the cars are strong indicators, but also the costume and set design convincingly create a sense of time but also of legacy, as passing but poignant references are made to both Ken and Shelby’s experiences in World War II. There is also a pleasing culture clash, as the Britishness of the Mills is quaint yet convincing, with frequent references to “put the kettle on,” and Ken demanding “a cuppa and a cob” as he finishes a lap. Furthermore, the sequences in Ford’s factories and offices create a strong sense of established and entitled power. Ford’s first scene involves threatening his workers with dismissal because he is not happy with the shadow cast by his father, so this blustering bully is set up nicely for a plate of humble pie. His circle of sniveling sycophants is epitomized by Leo Beebe (Josh Lucas, “What They Had”). Leo’s goal — to ingratiate himself with Ford, frequently clashes with that of Shelby and Ken — to win the race. Much humor and frustration is generated by these clashes, and while the film’s sympathies are clearly on the side of Shelby and Ken, the viewer might find themselves wondering if they could make it easier on themselves by being a bit more diplomatic.

Rather than be diplomatic, our heroes tend to be bold and instinctive, much as they are when it comes to racing. And the racing scenes of this film are terrifying! Mangold and director of photography Phedon Papamichael (“Nebraska”) thrust the viewer not so much into the driver’s seat as onto the wings and bumpers of the cars, hurtling along at breakneck velocity and screeching around the hairpin turns. In one highlight, Ford gets to experience the power of his own product, and his reaction is likely what many a first timer’s would be in a vehicle moving at the speed of the GT40 Mk II. Some of the dialogue about the (literal) mechanics of automobiles and racing might mean more to viewers interested in cars, but like Ron Howard’s “Rush,” Mangold and screenwriters Jez Butterworth, John-Henry Butterworth and Jason Keller craft this story in broad, crowd-pleasing strokes, ensuring that the racing novice is not left at the starting line. Instead, racing enthusiast and fan of character drama, not to mention witty dialogue, alike can enjoy this quirky and at times viscerally thrilling tale of friendship, intuition and ingenuity. And the novice (such as this reviewer) may find that they learn a bit about racing too. So it might be fair to say that Le Mans ‘66 is about racing, but a lot more besides. 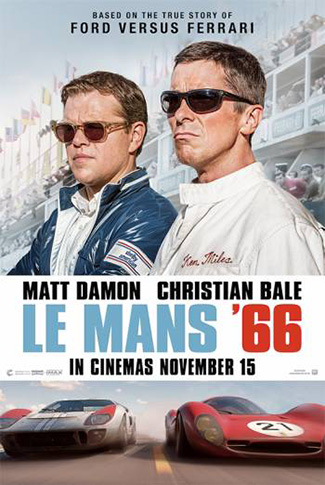