“Before you know kindness as the deepest thing inside, you must know sorrow as the other deepest thing… Then it is only kindness that makes sense anymore” — Naomi Shihab Nye

Though it is a genre that often flounders on an excess of sentimentality, first-time writer-directors Tyler Nilson and Michael Schwartz’ The Peanut Butter Falcon beautifully captures the ability of two damaged people to transform their life by sharing their pain with each other. It is a brave film that depicts the friendship between a young man with Down syndrome (Zack Gottsagen) and a depressed crab fisherman (Shia LaBeouf, “Fury”) who has been torn apart by the death of his brother (Jon Bernthal, “Baby Driver”) in a car accident he caused by falling asleep at the wheel. Though the film is not entirely free of clichés, it works because of the authenticity of the two leads and the director’s ability to avoid cheap emotional appeals.

Recruited from a camp for actors with disabilities, Gottsagen delivers a spirited and sensitive performance that conveys his openness, humor, and capacity for love. As co-director Michael Schwartz explains, “It’s important that people see that Zack’s character has the full range of emotions of a human being. He gets frustrated, he has aspirations, he feels love. That’s something that not a lot of people have seen done before for a character with a disability, especially Down syndrome. The authenticity of his character has touched people.” Set in the Outer Banks, a string of barrier islands off the coast of North Carolina and southeastern Virginia, Tyler (LaBeouf) has to resort to stealing traps from licensed crab fisherman as a result of losing his fishing license as a result of the accident.

Still grieving, Tyler flirts with disaster when he steals from the meanest people around — Duncan (John Hawkes, “Three Billboards Outside Ebbing, Missouri”) and his sidekick Ratboy (Yelawolf). The two men vow revenge and relentlessly pursue Tyler throughout the film, lending a touch of action to the adventure. The movie’s main focus, however, is on the friendship between Tyler and Zak that develops when Zak escapes from an assisted care facility with the assistance of his roommate, Carl (superbly played by Bruce Dern, “American Dresser”) and ends up hiding out on Tyler’s fishing boat.

Leaving behind his devoted caregiver Eleanor (Dakota Johnson, “Bad Times at the El Royale”) who has a good idea of where he may be headed, Zak’s dream is to become a professional wrestler and wants to attend a school for wrestlers run by his hero, “The Salt Water Redneck” (Thomas Haden Church, “We Bought a Zoo”), who he watches constantly on an old videotape. Dressed only in his undershorts, Zak seeks comfort in Tyler’s boat after he witnesses the raging fire that Tyler set on the traps of his competitors. After some initial resistance, Tyler agrees to bring the young man to the wrestling school in North Carolina and continue to Florida where he hopes to start a new life.

With the sound of the banjo playing authentic blues and folk songs in the background, we follow Tyler and Zak as they trek on foot through the backwoods of the South, listening to what ecologist priest Thomas Berry calls ”intimate modes of spirit presence.” The journey is not without its dangers, however, as they are almost run down by a speeding boat while making their way across a river and barely escape with their lives. As a genuine affection grows between the two men, Tyler teaches Zak to swim, shoot, and talks to him about forgiveness and self esteem, in effect, seeking his own redemption. Training to become a wrestler, Tyler gives Zak the name “The Peanut Butter Falcon,” a moniker he will wear proudly when he enters the ring against stiff competition.

In one of best scenes in the film, Tyler meets Eleanor for the first time in a general store and tells her that Zak is “living the American dream,” and does not want to go back with her. With the help of a blind preacher (Wayne DeHart, “Looper”) who baptizes the two men and gives them a blessing to set them free from “the wolves of the past,” they construct a raft and float down the river in the spirit of Huckleberry Finn, joined by Eleanor who seems as interested in Tyler as she is in Zak.

While The Peanut Butter Falcon suffers from a slight case of obviousness, it is not a terminal illness and the strength of the performances by LaBeouf, Gottsagen, and Johnson make the film one of the joys of the year. More than a feel-good fantasy, however, it is a look at how society marginalizes people who are different or disabled and we cringe when we hear the wretched “R” word. The director says, “It’s more of a poem to me than a film. Caring is cool to me! I like showing a story where people care about each other and unify despite living in a world where there’s a lot of people tearing each other apart. I hope people come together after watching a film like this.” While it may take more than that, it would be a welcome start.

'Movie Review: The Peanut Butter Falcon (2019)' has no comments 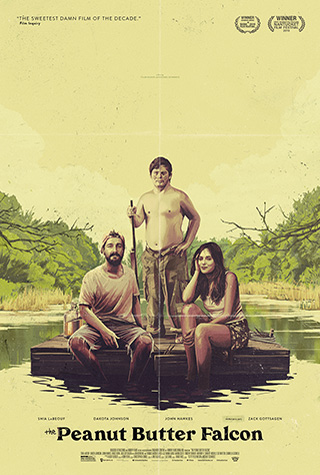