It’s Sam’s (Hayley Griffith, “Five Years Later”) first day delivering pizzas, and what a day — and what a night — it will be. She must deliver to a property in an exclusive estate — specifically, the residence of a Satan-worshiping cult, led by the fearsome Danica (Rebecca Romijn, “X-Men 3 – The Last Stand”). Sam’s moped breaks down, so she’s stuck there. Introductions are brief, and soon Danica’s followers are hunting Sam down because they need a virgin to sacrifice at their ceremony.

Sam meets Judi (Ruby Modine, “Happy Death Day”), a relation of one of the worshipers and another would-be victim of their “traditions.” The girls team up to take down Danica and banish the privileged cult to the hell they adore, as violently as possible.

Not to be confused with the lamentable 2009 movie of the same name, Satanic Panic is still bad in most ways that count, but it’s not a complete lost cause. If we kill it with criticism first, it can be resurrected with mild praise later.

The film doesn’t start well, committing the screenwriting crime of making the main character a neutral entity who simply reacts to the colorful whack-jobs around her. The passive hero is okay if she’s thrust into an unavoidable situation, but here her decision-making is the main driver of events. The conflict scenarios feel like they’ve been plotted out beforehand, and Sam is merely the connective tissue, inexorably fated to joining those beats together. Slave to such narrative whims, this makes her character inconsistent at best, and at worst it is crippling to the film’s internal logic.

An example, if you will. We gather from the opening scenes that Sam is thoughtful and smart yet also painfully meek. So, it makes no sense when, upon discovering she hasn’t received a tip, she proceeds to break into the mansion, barge through a crowd of cloaked strangers, and then interrupt Danica’s Satan-praising speech to demand more money. A grimdark backstory almost lends some context to Sam’s actions later, but it’s too little, too late, and too lazy.

A more general inconsistency in characterization undermines what should be amusing comedy moments, too. At one point, cult-deputy Gypsy (Arden Myrin, “Extracurricular Activities”) conducts a dramatic voodoo ceremony, clearly showing that she is au fait with the dark arts. Yet in the next scene she balks at the idea of reading someone’s intestines, as if this is ridiculous. Then there’s Danica herself. If she has telekinetic powers that allow her to choke people with a simple glare, why does she bother going through the effort of drugging a potential informant?

From the moment snooty socialite Danica plunges her hand into her husband’s neck wound to retrieve the alien organ glowing in his chest cavity, we are in the realm of Brian Yuzna’s gore satire “Society.” Except in “Society,” this moment of madness was a final reveal, acting as a horrifying crescendo to the implied horrors up to that point. In Satanic Panic, we get a protagonist who exists merely to verbalize the WTFs in our minds and push us to the next zany encounter, few of which pertain to the last. In other words, there are plenty of ideas, just no coherency to bind them. At one point a creature pulled from someone’s guts flies away, as if foreshadowing some future encounter, but we never see it again.

More of a challenge is the humor, which hovers around the crass/questionable Venn space. A sexual assault scene is played for laughs. So is the moment when Sam punches a child. There are tiresome jokes about how the worshipers are all middle-aged. It may be a film about summoning demons, but that doesn’t mean the comedy need be so mean-spirited.

But there are positive aspects to the film. For a start, there is always a unique atmosphere to horror films set over a single night. Enhancing the mood, Wolfmen Of Mars produce a cracking, synth-inflected score, harking back to a decade where we imagine every horror film had this quality of music but very rarely did. And one way in which it can hold a candle to its key forebear is in the practical effects. While nowhere near Screaming Mad George in terms of sheer bizarreness, there is some fantastically gooey makeup.

While Griffith may be lumbered with a poorly conceived part, the main supporting performers are a hoot. A snake-eyed Romijn delectably tucks into her role with wry, sardonic delivery; and Modine nails the right tone, whilst her character enjoys a clarity lacking from Sam.

Finally, there’s a glimpse of a neat idea in the final act — albeit one lifted from Martin Scorsese’s “The Last Temptation of Christ” — but it’s swiftly dispensed with in favor of a hurried and unsatisfying ending. It kind of sums up the overall experience: Decent ideas given too little time and too little thought, squandered in the film’s dash toward becoming the fractured sum of its disparate parts. 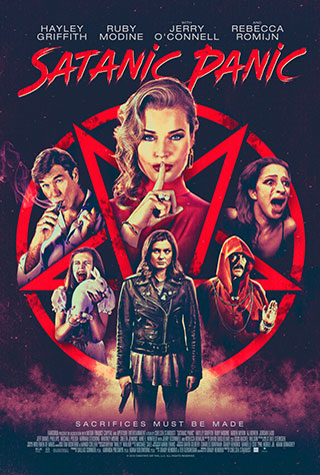