In some ways, Theresa “Tree” Gelbman (Jessica Rothe, “Wolves”) is your average college student. She parties, she drinks, and, at the end of the night, she doesn’t always end up at home. In other ways she’s your average sorority girl (the pathetically one dimensional way sororities are portrayed in movies, at least). She maintains shallow friendships with horrible people (specifically Rachel Matthews’ exhaustingly unrealistic Danielle) and acts like an entitled bitch toward everyone else. In two significant ways, though, Tree is unlike anyone else in her movie and her world. First of all, she has a horrible secret that has destroyed her family and her birthday. Second of all, this year, her birthday is coming again and again and again, in an equally fun and frightening way reminiscent of (and at one point, unfortunately, directly referencing) seminal classic “Groundhog Day” and last spring’s cinema adaptation of “Before I Fall.”

To only spoil the very beginning, after waking up in the dorm room of adorkable Carter (Israel Broussard, “Earth to Echo”), returning to her sorority house to find out that her secret, that today is her birthday (and so much more), has been discovered, and heading to what turns out to be her own unwanted surprise party, Tree is violently killed. The next thing she knows, however, Tree finds herself waking up in Carter’s room again, reliving the morning of that same day.

What follows is a film that defies genre guidelines. While never quite terrifying, Happy Death Day certainly has some scary scenes. It is also laugh out loud funny at times, but never in a self-referential way, as horror-comedies often are, aside from the jokes Tree makes to herself throughout. I hesitate to call it a mystery either, only because its resolution leaves more questions asked than answered. Regardless, Happy Death Day is one hell (purgatory?) of a time.

What stands out the most about the movie is the journey Tree goes on and how it changes the way she treats others and herself. I found myself reminded of “Mama,” an imperfect yet underrated film in which Jessica Chastain experiences far more actual character development than most characters in most horror movies combined. Even better, Tree is not only the Final Girl, she is the only girl. Victim, detective, hero, and pro- and antagonist in turn, Theresa truly does it all. Not only do you not like her at first, you also get the impression that neither does she. Then, throughout the one hour and thirty-six minute run time, both you and Tree herself grapple with her situation, struggle to get to the bottom of it, and, on a few days at least (it is implied that the whole ordeal lasts just over two weeks), make the best of it. Without giving its particulars away, the montage of that last type of approach to Tree’s situation is one of the most satisfying sequences to watch in the entire film.

Now that we’ve gone over some of the best aspects of Happy Death Day, it’s time to move on to the worst. As already mentioned, the Danielle character is beyond ridiculous in ways you can already predict without outlining specifically, and so I won’t. The only thing she does that warrants special attention is a disgusting ableist “joke” she makes when Tree appears to not have heard the last thing the sorority stereotype said.

Then, there are myriad plot holes, some of which I will run through right now without including a context that would give anything away. Why would Tree’s roommate Lori (Ruby Modine, “Shameless” TV Series) want — or be permitted — to join Kappa in the first place? Does Tombs (Rob Mello, “The Magnificent Seven”) even know who Tree is? Why doesn’t Tree spend the entirety of the last birthday she lives with doctors, lawyers, police, or her dad (Jason Bayle, “Trumbo”)? What are the lasting physical ramifications of Tree’s ordeal? Once you learn who the killer is, were they expecting or even trying to get away with their plan? How?! And, speaking of, if Tree knows she is reliving the same experience every day and attempting to discover who the killer is, why does she only ask once and never, regardless how many times they are literally face to face, even attempt to remove their mask?

Despite these issues — and, if I’m being honest, many, many more — watching Happy Death Day is a really great time. I laughed, I wondered, I winced. I loved watching Tree simultaneously kick ass and evolve, and, even despite its ultimate lack of resolution, I would not mind watching this movie over and over again. 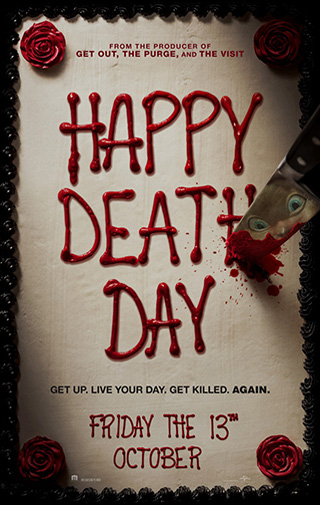