The whodunnit provides a certain kind of cinematic pleasure. The crime which is never straightforward. The host of suspects, all with motives and sometimes conflicting alibis. The elaborately twisting plot where half the fun is not knowing and the other half finding out. Through the decades and across media from literature to film to television and back again, the whodunnit genre has merged mystery with ensemble drama, personal drama with social commentary, combining these diverse elements to give the audience an enjoyable time.

Rian Johnson’s Knives Out gleefully embraces these tropes, creating a lively whodunnit in the classic style of “Murder on the Orient Express” and its ilk. Johnson further enervates his film with a modern sensibility, ensuring that Knives Out is far from dusty or old-fashioned. The discovery of deceased Harlan Thrombey (Christopher Plummer, “All the Money in the World”), bestselling mystery author and publisher, leads to an initial verdict of suicide. Nonetheless, police detectives Lieutenant Elliott (LaKeith Stanfield, “Sorry to Bother You”) and Trooper Wagner (Noah Segan, “The Mind’s Eye”) begin their investigation, aided by the enigmatic private detective Benoit Blanc (Daniel Craig, “Spectre”). The subsequent interviews create a picture of an extremely dysfunctional extended family as well as a multifaceted series of events that preceded the death of Harlan.

There is great fun to be had watching the various characters declaring their innocence, even though they are not being accused. Their defensiveness speaks volumes about their fundamental insecurities and discomfort over any questioning of their privileged positions, making the film a damning indictment of the 1%. Linda Drysdale’s (Jamie Lee Curtis, “Halloween”) withering matriarch and Richard Drysdale’s (Don Johnson, “Book Club”) would-be alpha male offer differing attempts at authority, Richard’s bluster easily overcome by Linda’s supercilious sneer (not that the investigators are fazed). Walt Thrombey’s (Michael Shannon, “The Shape of Water”) spineless non-favorite son and Joni’s (Toni Collette, “Hereditary”) modern-day hippie provide a further contrast, one desperate to please while conspicuously hating that he does so; the other projecting a blasé attitude that is as transparent as it is flamboyant. The younger generation are represented by Meg (Katherine Langford, “Love, Simon”), a fairly hopeless hope for the future and Jacob (Jaeden Martell, “It: Chapter Two”), a contemporary neo-Nazi. Meanwhile, the oldest generation, Great Nana Wanetta (K Callan, “Midnight Clear”) is an amusing if incomprehensible observer. Ransom Thrombey (Chris Evans, “Avengers: Endgame”), sporting some very fine knitwear, offers a sarcastic and cynical commentary on his fairly despicable family, his forthrightness a refreshing contrast to the dishonesty of his relatives.

But the true center of the drama and the viewer’s anchor character is Marta Cabrera (Ana De Arma, “Blade Runner 2049”), devoted nurse to Harlan and the last person, presumably, to see him alive. Marta is the first major character that the film introduces, and her innocent looks and seeming naïveté are immediately endearing. Marta exhibits what appears to be genuine compassion and conscience, these traits distinguishing her from the Thrombey/Drysdales as surely as her social, racial and national status. Marta’s in-depth knowledge of the family in general and Harlan in particular instantly attracts Benoit’s attention. Furthermore, Benoit rapidly suspects foul play, but as he declares in his molasses thick accent, it is hard to eliminate suspects.

The film’s set up is ripe for intrigue, including the fractious character relations and the turns and swerves of the mystery, at one point given physical form with a thoroughly incompetent car chase. Johnson skillfully interweaves these elements, peeling away layers of deceit and resentment as Benoit and his reluctant partner Marta (whom he dubs “Watson” to his Sherlock Holmes) fill in the hole at the center of the “donut,” as Benoit describes the mystery. Witticisms like this abound in Knives Out, both in terms of writing and direction. The dialogue is razor sharp, the cogs of the narrative interlock like a finely tuned Swiss watch, and Johnson’s direction smartly propels the viewer along at just the right pace.

The extensive cast are all on fine form, belying the common belief that the more fun people have making a film the less fun it is to watch. Curtis and Johnson’s jostling for dominance makes them a great double act, while Collette turns in a bravura display of middle-aged ditziness. Shannon is a delight in his cast against type role, as he typically plays menacing and imposing figures. Here his large frame seems compressed by the repression and frustration of Walt, unable to express himself even in moments of abject fury. There is something of a contest in terms of chewing the scenery, but Daniel Craig wins hands down, his laconic Benoit showing flashes of impassioned engagement, both for the mystery but also for human compassion, especially in relation to Marta. De Armas matches her more seasoned co-star point for point, her large eyes expressing fear and vulnerability, yet with a steely resolve so we doubt her commitment to Harlan and his legacy, as well as basic human decency. The double act between Benoit and Marta provides an emotional heart to the drama, ensuring that it is neither a cold piecing together of facts nor a knockabout farce. Instead, Knives Out is an engaging journey into intriguing characters and a mystery as richly textured as the grand mansion where it all takes place. It is also very funny as, while it would be misleading to describe the film as a comedy, there is a great deal of humor, from the bickering of the family to the absurdity of their wheeling and dealing, and a recurring gag about a gag reflex that never outstays its welcome.

On top of, or perhaps beneath, all this wry structuring and flamboyant performance, Knives Out offers sly satire. The neoliberal appearances of the Thrombeys/Drysdales rapidly give way to self-interest and patronizing attitudes, as they regularly treat Marta as a servant and their actual servants like dirt. Topics including feminism, the environment, immigration and white supremacy are thrown around with equal contempt, as the extended family’s interest quickly turns to the matter of inheritance. Beautifully, Johnson does not allow the politics to overwhelm the drama, integrating his social commentary into plot pursuance and character development. Recurring tropes of actual knives, food, game pieces, dogs, and coffee mugs pepper the film, all carefully slotting into place with never a wasted moment. Come the end, the viewer is likely to feel a delightful sense of glee, their intellect exercised and their ribs tickled. We know who has done what, not least that Mr. Johnson has done a damn fine movie. 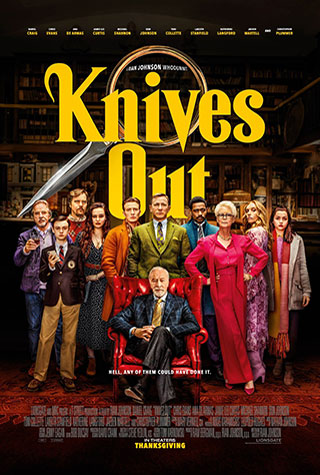