Stephen King’s “It” has a long history. From the original novel to the 90s mini-series, an audio book and now two motion pictures, the battle between Pennywise the Dancing Clown and the Losers Club has frightened and fascinated generations of readers, listeners and viewers.

Andy Muschietti’s big screen release of “It” in 2017 was a delight, shot through with coming of age concerns, small town issues and outright terror. Annoyingly, It: Chapter Two only lives up to some of the potential established in the first installment. This is largely caused by the film’s unevenness, as it comes across as a series of vignettes rather than a coherent whole. Muschietti stages many effective set pieces but seems to struggle with giving the film a firm foundation, which the first film possessed by virtue of the young protagonists coming to terms with their personal demons while taking on the malevolent Pennywise.

As It: Chapter Two takes place 27 years after the earlier events, the characters are obviously adults, and a disparate bunch of people they are. Mike Hanlon (Isaiah Mustafa, “Madea’s Big Happy Family”) is the only one to remain in the town of Derry, Maine, where the events of the first film took place, and his obsession with the town and its curse has taken its toll. Bill Denbrough (James McAvoy, “Dark Phoenix”) is a successful author and screenwriter, but his endings are often criticized (in an apparent nod to King himself, who does a cameo in the film). Beverly Marsh (Jessica Chastain, “Molly’s Game”) heads up a fashion house, but has married a man as abusive as her repugnant father. Richie Tozier (Bill Hader, “Trainwreck”) is a famous comedian, but feels a fraud over his material. Ben Hanscom (Jay Ryan, “Mary Kills People” TV series) is a sought-after architect, isolated from the world in a sleek home of (presumably) his own design. Eddie Kaspbrak (James Ransone, “Write When You Get Work”) escaped the smothering influence of his mother, only to marry a woman much like her. And while we see little of the adult Stanley Uris (Andy Bean, “The Divergent Series – Allegiant”), we see enough to understand that all is not well with him.

The catalyst for bringing these old friends, who apart from Mike barely remember each other, back together is one of the film’s most effective sequences. A homophobic attack in Derry demonstrates the malice, cruelty and fear that Pennywise feeds on, and the sequence is deeply harrowing to watch as a group of thugs brutalize a gay couple. From that tight opening, the film then jumps between the seven members of the Losers Club, detailing their individual lives, their reunion, individual quests to locate key tokens of their childhood, and flashbacks to show events of their childhood, bringing the young actors from the first film back for more.

The last of these feels jarring and contributes to the film’s protracted length. Had the additional scenes of the young Losers been part of “It: Chapter One,” they might have felt more organic. Here, where they seem present so as to remind us that more happened earlier on than we saw previously. Furthermore, some scenes could have been excised to make the pacing smoother. Another problem is that while the film does offer genuine scares, these are often undercut by jokes that are only mildly funny. References to other films — including “The Thing” and “The Shining” — feel forced and too much of a nod and wink to the savvy viewer. As a result, there are long sections of the film that drag and are even slightly boring.

On the plus side, the characters are a likable bunch and the actors give good effort. Hader’s Richie is a standout, his weak jokes pointing to the hollowness of his personality. Chastain’s Beverly exudes warmth and pain in equal measure, while McAvoy’s Bill carefully integrates the younger character’s stutter as his memories return. Eddie’s whininess is just the right side of grating, although Mike and Ben are somewhat short-changed. As their adversary, Bill Skarsgård’s Pennywise is as savagely freakish as ever, his melodic tones, contorting body and salivating jaws conveying a deep sense of wrongness, reminiscent of Robert Louis Stevenson’s description of Edward Hyde: No obvious deformity, yet a undeniable manifestation of evil.

Pleasingly, when the visual effects break out, Muschietti does not allow them to overwhelm the physical performances, as monstrous hags, fountains of blood and giant lumberjacks could easily become a mess of pixels. Muschietti wisely keeps the focus on the threatened characters, the strength of that opening sequence continuing through other set pieces as hideous monsters threaten our heroes. These set pieces are another significant strength of the film, as the viewer is repeatedly thrust into the terrifying situations the Losers find themselves in. A brilliant dinner scene features fortune cookies filled with horrors, and later scenes feature a vomiting leper in a darkened basement as well as a naked old woman performing a grotesque dance. The final act of the film, featuring the nightmares of all the Losers and a twisting, distorted environment, may be again overlong but still delivers plenty of thrills and shocks. Best of all is the climax, a superbly staged set piece of scale, strobes and spikes that maintains tension and terror, and even some melancholia.

Much like the Losers themselves, It: Chapter Two is at its strongest when it brings its disparate elements together. Uniting focused characters, a singular quest, a menacing atmosphere and horrific imagery, the film may be an uneven horror thriller of memories, stories, friendship and fear, yet it manages to gain power from the sum of its united parts. 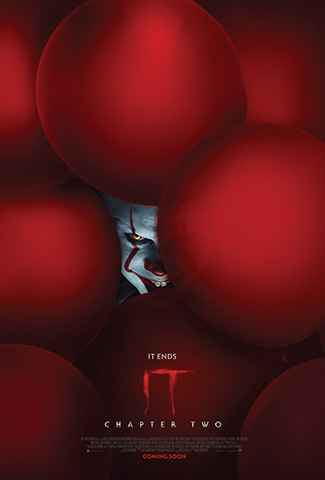