They say that reading is fundamental, but the romantic goings-on in the mature rom-com Book Club should be more of a page-turner especially when it involves some of Hollywood’s all-time seasoned and decorated actresses. In a way it is quite refreshing (and rare) to encounter an unconventional romantic comedy catering to senior citizens as the summer movie season heats up. Book Club has its heart in the right place when focusing on older female friendships, intimacy and literary curiosities. Plus what better way to convey the sentiments of vintage romancing than showcasing the experienced talents of Academy Award-winning performers Jane Fonda, Diane Keaton, Mary Steenburgen and Oscar-nominated/multiple Emmy Award-winning Candace Bergen? Unfortunately, these crafty and capable veterans cannot lift the well-intentioned, but saggy, exploits of the pedestrian material beyond the film’s contrived spirited irreverence.

First-time co-writer/director Bill Holderman (also sporting a co-producing credit) and co-writer/co-producer Erin Simms (“A Walk in The Woods”) concocts a sometimes breezy, off-the-wall vehicle for our aged foursome that gives off feel-good vibes of womanly wonderment as cheeky overtones occasionally weave in and out of this seemingly sophisticated showcase. Invariably, Holderman resorts to routinely tapping into the spunky meatiness of our bookworm ladies’ dalliances with promising and problematic suitors, sexual enlightenment, and independent fulfillment — all inspired by the selective and suggestive reading source at their book club gathering.

Indeed, there is a slew of sauciness and a fun-loving tone to Book Club, however, the gimmickry of lovely oldsters trying to get their groove on among the fancy setting of books, wine, cheese, fruit and elegant social circles only resonates intermittently. The plot feels mostly familiar and delves into cliche-ridden territory, never really mustering much spark or welcomed cynicism for the quartet of established actresses who deserve better than what this by-the-numbers post-menopausal premise of chuckles gives them. The reductive messaging about older, attractive lonely ladies seeking male companionship in the later stages of life unevenly exposes the meager script.

Long-time friends — successful hotelier Vivian (Fonda, “Youth”), Diane (Keaton, “Love the Coopers”), federal judge Sharon (Bergen, “The Meyerowitz Stories”) and heralded chef Carol (Steenburgen, “Last Vegas”) — have been meeting at a book club for nearly five decades discussing and bonding over instrumental reading material. These close-knit sixty-somethings have read various books with feminist leanings over the years, but the latest tome introduced by Vivian is the scandalous “50 Shades of Grey.” At first the controversial read is met with skepticism, but soon the literary landmine is embraced with intriguing enjoyment — a liberating factor for the group of friends contemplating their stagnation of romance and affection.

The single Vivian yearns to secure a permanent relationship, as her hopping from one guy to another in meaningless trysts is getting tiresome. Widowed Diane, looking for anything in terms of sexual appeasement from anyone, is constantly smothered by her two adult daughters looking to influence their mother’s amorous doubts and indecision. The married Carol, feeling trapped in an uneventful marriage, is merely going through the motions with her husband Bruce (Craig T. Nelson, “Get Hard”), while the divorced Sharon harbors a strong indifference toward sexual activity and has given up on finding romance altogether.

Putting the laundry list of give-and-take interactions and the serving of conflicting, yet predictable, feminine archetypes aside, Book Club is jaunty enough, especially with the combined energies of Fonda, Keaton, Bergen and Steenburgen applying their snappy chemistry on the big screen. Sadly, the clunky dialogue and inclusion of arbitrary cheap jokes pertaining to Viagra, boob jobs and erection ridiculing seems sophomoric and misplaced. Nevertheless the women of “old Hollywood” seeking out their elusive mojo is an enriching concept for moviegoers, particularly those in the over forty crowd. 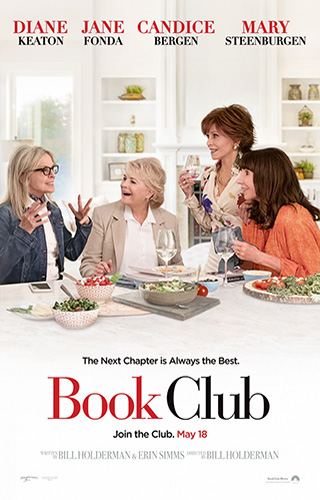