Love has an incredible ability to warm and soothe the soul (fireplaces can do that, too!) and it’s interesting to find stories of unexpected romances set in different times and spaces. It can present the illusion of freshness for a tale as old as fuzzy cucumber slices underneath a car seat. But the illusion is only as good as its magician. If that magician is a master, it’s because master magicians know how to keep their audience in wonder — even if we’ve seen the same trick a thousand times. Cinematic storytellers have to do the same thing. They must keep us, the audience, focused, even if they deliver us a film that doesn’t appear overly original.

In his feature directorial debut, Sean Mewshaw and first-time screenwriter Desiree Van Til offer us Tumbledown, a seemingly forbidden love story that’s set in a quiet New England town during a frosty winter. Rebecca Hall (“The Gift”) portrays Hannah, a grieving widow of a sensational folk singer. Meanwhile, Jason Sudeikis (“Sleeping with Other People”) plays Andrew, a music scholar who wants to write a book about Hannah’s late husband. As indie as this movie may appear, Mewshaw and Van Til are no strangers to the mainstream universe. Rising through the production crew ranks, they’ve worked on projects such as “Gangs of New York,” “Remember the Titans,” and “Drillbit Taylor.”

Tumbledown represents the next step in their evolution as storytellers, displaying flashes of a solid filmmaking team in the future. At the center of their current modest scenario, the film’s leads, Sudeikis and Hall, have a natural chemistry that transforms monotonous conversations between two strangers into an invisible, yet enjoyable tennis match. Together they convey decent, understated performances that aligns with the film’s consistent mild-mannered dramatic tone. Along with that, the narrative also flirts with occasional sprinkles of comedy. However, it’s unashamedly dry, preventing any space for authentic belly-laughs. Although, thankfully, it avoids heavy uninspired slapstick situations as an easy way to solve that problem. But the film’s problem isn’t a lack of humor, it’s the missed opportunities of becoming a compelling narrative.

Despite adequate performances, the supporting characters are wasted from making a gripping impact. The story was set up with intriguing pieces of potentially engrossing conflict: Hannah’s go-to one-night-stand-man (Joe Manganiello, “What to Expect When You’re Expecting”) , Andrew’s considerate girlfriend (Dianna Agron, “I Am Number Four”), Hannah’s wise, David Beckham-loving friend (Griffin Dunne, “Dallas Buyers Club”), and Hannah’s family lead by an overbearing mother (Blythe Danner, “The Lucky One”). All of these elements were in place to push the complexity of this tale into a stronger dimension. Instead, this story settles for being minimalist without simple plot arcs to enhance the grand design of its world.

For a movie that’s supposed to be about letting go, its attempt at an empowering, ethical message doesn’t extend into the nature of its characters. During the film, Andrew claims he’s trying to rescue Hannah, but at what cost? His notions aims for nobility, when, in actuality, it rings false with shady ulterior motives. Hannah is no angel herself, which is fine because protagonists should be flawed as we root for them to accomplish their goals. With Tumbledown, we have a couple who easily arrive at a destination without much challenge. We are engulfed into a season where a narrative like this unfortunately falls backward rather than spring forward. 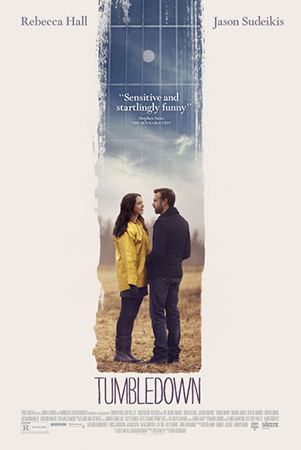