Director Nicholas Hytner (“The History Boys”) serves up a poignant portrait of a disillusioned elderly British bag lady marching to the beat of her own distinctive drum in the uplifting and quirky dramedy The Lady in the Van. Hytner’s touching and slightly offbeat character study is certainly a triumphant turn for revered veteran actress Dame Maggie Smith (“The Second Best Exotic Marigold Hotel”) as she exudes an indescribable charm as ex-nun-turned street dweller Miss Mary Shepherd.  The implied vulnerability and determination of Smith’s homeless van-bound Virgin Mary follower resonates convincingly. Indeed, The Lady in the Van is the ideal vehicle for Smith’s Miss Shepherd whose eccentric humanity is the heart of Hytner’s celebrated narrative.

The Lady in the Van is based upon the adaptation of Alan Bennett’s West End play (which in return stems from his best-selling memoir). The premise finds gay playwright Bennett (Alex Jennings, “The Queen”) in the early seventies living in suburban Camden when his driveway welcomes an unlikely visitor — former nun Miss Mary Shepherd and her “mobile residence” in the form of a dilapidated yellow van. Noted as one of Britain’s most applauded playwrights, Bennett has never compromised his obsession with struggling mature women. In fact, Bennett has had his fill of catering to complex old ladies that are near and dear to his heart. First, Bennett’s focus belonged to his needy and sickly mother (Gwen Taylor) a few miles away. However, Miss Mary would be the latest irascible old dame to dominate Bennett’s time and attention. Go figure.

Incredibly, Miss Mary would end up “camping” out at Bennett’s driveway for the next fifteen years to come. Bennett was tolerant of the disillusioned and moody Mary Shepherd whose calling to live in her clunky van was endorsed in spirit from the Virgin Mary’s backing.  Consequently, Bennett’s existence at 23 Gloucester Crescent, Camden would never be the same as the colorfully off-beat oldster would define her existence as an independent soul attached to her canary yellow tin-on-wheels. Miss Mary, at least not outwardly at first, did not fully acknowledge the reluctant generosity of Bennett’s allowance in ensuring that she had a resting place for her and her “rolling residence.”

Interestingly, Jennings assumes a dual role as Bennett and his many titles such as playwright, actor, author and screenwriter. The tormented Bennetts are at odds as to what to do with the street-bound crabby old lady and her horrid mixture of disagreeable body odor and a bad disposition.  Convincingly, the demanding Miss Mary had proven to be a major pain-in-the-neck and unkind thoughts about how to eradicate this devoted Catholic old crow has crossed Bennett’s fragile mind.

Of course there is a sensationalized backstory as to why Miss Mary may have tainted her indelible psyche with guilt, shame and peculiar behavior. In the years passed on Miss Mary was involved in a motorist crashing incident that was extremely critical. Feeling shaken up by the vehicular accident Miss Mary fled the scene and never looked back or took responsibility for her reckless decision not to stick around and resolve the dire circumstances at large. So the question remains: Is Mary Shepherd’s pending sin her reasoning for withdrawing into denial and distrust? Is Mary’s homelessness and wandering van a self-serving punishment for her to bear both psychologically and emotionally? Has Mary retreated from reality based on her religious-based letdown of yesteryear?

The Lady in the Van flows breezily and the audience is intrigued by the problematic pairing of the put-upon twin Bennetts and the neighborhood’s nagging senior citizen caught up in her own suffering world of imposed despair. Smith’s Mary Shepherd is undoubtedly wounded in her tested soul and conveys a misunderstood “down-on-your-luck” diva saddled in damaged doubt and dirt. Jennings presents Bennett as an artistic idealist trapped in the realm of a caged caretaker being pulled apart by elder women that invite and inspire shades of affection and alienation.  Additionally, the supporting characterizations are instrumental in the witty wonderland of Hytner’s spry exposition.  Among the notables is Stephen Campbell Moore’s affable physician, Samuel Anderson’s intrusive Jehovah’s Witness and Frances de la Tour (“Hugo”) and Roger Allam (“The Woman in Black”) as uppity residents with mounting impatience.

It is a winning third-time collaboration for Nicholas Hytner and screenwriter Alan Bennett to promote the resourceful The Lady in the Van upon the heralded heels of the aforementioned “The History Boys” and “The Madness of King George.” Overall, this warm gem is energized by the captivating Smith that instills this beleaguered Brit bag lady with indescribable exuberance. 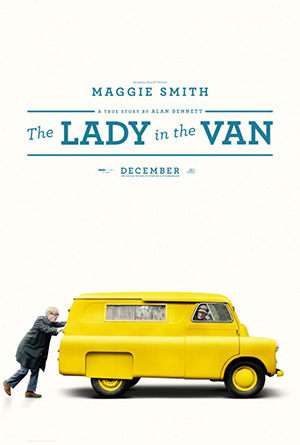