Jason Bateman seems a pretty likable guy, despite his penchant for sharp, sarcastic characters. Gone are the days of the sweet, nurturing, unassuming hero; we as a society are deeply entrenched in the era of the sarcastic everyman — the guy who doesn’t simply turn the other cheek. This is the guy who reminds you of the good friend who doesn’t mince words and calls people out on their crap. This is the guy you want to hang out with and grab a beer. However, in The Gift, Bateman isn’t that guy we’ve grown used to and have cheered for; in this film, he’s arrogant, entitled, and — because there’s just no better word for it — a bully. What’s really intriguing about Bateman’s portrayal of Simon Callem is how much you grow to dislike him.

Why is that so interesting, you ask?

Well, because in a movie where a husband and wife are stalked by an unnerving person-from-the-past, Simon — as the guy in the lead role — is the one you would normally align with and hope comes out okay in the end after the bad guy has been defeated. Yet, in writer/director/star Joel Edgerton’s movie, you find yourself rooting for Simon less and less, and that’s only the beginning of the twists in the film.

Simon Callem (Bateman, “Identity Thief”) and his wife Robyn (Rebecca Hall, “Transcendence”) have moved to California to start anew; they’ve left their lives in Chicago for Simon’s new job and, in doing so, they’ve left behind Robyn’s interior design business, as well as some dark times she experienced as a result of a lost pregnancy. They buy a beautiful, modern, sunny home and begin putting things into their respective places. One afternoon, they run into Gordo (Edgerton, “Exodus: Gods and Kings”), an old high school friend whom Simon doesn’t recognize at first. Gordo shrugs it off, because, hey — it was a long time ago! — and the three make plans to catch up another time. As Robyn spends her day unpacking boxes and running errands, she comes upon a gift on their doorstep — a bottle of wine with a note (and a smiley face) from Gordo. She and Simon laugh it off as a nice gesture, but when Gordo appears at their door the next day, Robyn invites him in to stay for dinner.

An awkward relationship forms, and Simon decides that Gordo has developed an uncomfortable one-sided connection — he’s much more interested in being buddies than Simon is. In fact, Simon is convinced that Gordo, who keeps dropping by or leaving gifts for them, is far too interested in Robyn. Taking matters into his own hands, Simon cuts off the friendship, and considers the matter closed. However, in the subsequent days and weeks, Robyn feels watched in her own home, and becomes more and more convinced that something has gone wrong in the situation with Gordo.

In reviewing a thriller, it’s uncouth to give away too much, so suffice it to say that Joel Edgerton’s feature debut as a director is a winner. It’s hard to improve upon the established formula of the home-invasion/scorned friend-turned-stalker subcategory of the thriller genre, but Edgerton has done just that with The Gift. To appropriately describe Edgerton’s turn as Gordo requires an array of adjectives: The character is sweet, pitiful, helpful, awkward, overeager, sad, lost, and then . . . well . . . I’m going to leave it at that and let the character unfold for you as he did for me. Rebecca Hall’s performance as Robyn is guarded and subtle, suggesting quite the history between Robyn and Simon, which is only exacerbated under the stress of their relationship with Gordo. Hall’s simplicity pulls you to her side, and the audience quickly aligns with her, especially when Bateman turns up the volume on pompous, aggressive Simon.

Again, however, the real prize here is Edgerton, who has compiled characters, situations, atmosphere, tension, and a handful of twists that make The Gift a slow-burn thriller that is very much a present to those who have grown tired of formulaic stalker-type films. The psychological edge of each character’s experience is sure to stay with you, even after you’ve left the theater. And dare I say it? You might find yourself rooting for the bad guy now and again. 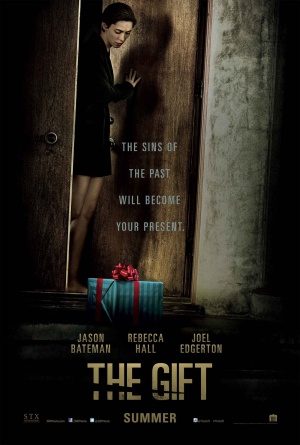