School movies, as a general rule of thumb, can usually be counted on to feature either an inspirational teacher or a terrible one. There’s little room for in-between. Kristóf Deák’s dramatic short Sing (Mindenki) opts for the latter, telling the tale of a kids’ school choir in Budapest that’s run by perfectionist singing teacher, Miss Erika (Zsófia Szamosi, “Strangled”).

When Zsófi (Dorka Gáspárfalvi, “The Door”) joins the school, she’s overjoyed to discover that the choir is open to all students, since she’s passionate about singing. But Miss Erika, ever the authoritarian, quickly puts her in her place, instructing Zsófi to lip-sync instead because her voice doesn’t meet the teacher’s high expectations.

Zsófi is also told to stay mum about Miss Erika’s demands and so the story unfolds as the young girl wrestles with this challenge. She doesn’t want to get in more trouble, but she does want to sing. The character has a quiet innocence that Gáspárfalvi plays very well, filling her eyes with the sadness that she otherwise hides from her peers.

The goal is simple, of course, and even the obstacle and villain are only mildly intimidating to us, so Deák sweetly sympathizes with his youthful protagonist to communicate how upsetting this situation is for her. His cast helps him sell the frustration and growing anger, and it’s easy for the audience to root for nice kids over a mean and controlling adult, so the dramatic elements all work effectively enough.

Still, it’s such a straightforward conflict handled with such a steadily conventional hand that it can hardly be called greatly moving or remotely revelatory. It doesn’t need to be by any means, but it should be acknowledged that due to this Sing sits squarely in the middle of the pack — good, not great, likable, not lovable.

What the movie accomplishes emotionally, it owes almost entirely to the young Gáspárfalvi, who really gives Zsófi a personality even as her voice is taken away. She’s the heart of a small movie that, while perhaps inconsequential, remains a tender look at kids traversing the tricky path of education. 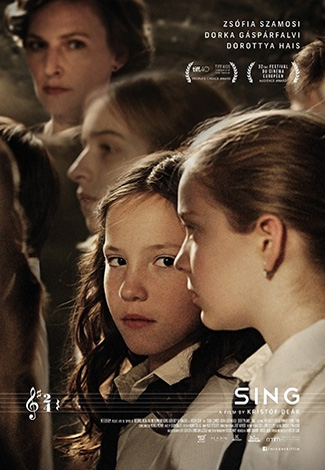