“When sky and sea came together like two lips touching, for that’s no small thing, no. To have lived through one solitude to arrive at another, to feel oneself many things and recover wholeness.” — Pablo Neruda

As Americans we love the idea of ordinary people rising from obscurity to become heroes celebrated for their courage or brilliance, the way the popular conception of Shakespeare has become faith in some quarters. Such heroes are depicted in 87-year-old Clint Eastwood’s The 15:17 to Paris, a dramatization of the confrontation between a suspected Islamic terrorist and two off-duty soldiers and a friend traveling on a high-speed train from Amsterdam to Paris as part of a summer vacation. The actions of the men: Airman First Class Spencer Stone; Alek Skarlatos, a young Army National Guard Specialist on leave from Afghanistan; and Anthony Sadler, a senior at California State University, may have saved the lives of hundreds of people aboard the train.

Cast as themselves in the film, the three men, acting for the first time, bring sincerity and authenticity to their roles, even though professional actors may have had more polish. The screenplay by Dorothy Blyskal, however, based on the book written by the three participants and Jeffrey E. Stern, can optimistically be described as “thin.” While the attack on the train is compelling and one of Eastwood’s best sequences, unless you are interested in a travelogue of major European cities, the rest of the film which fills in the character’s back story, does not rise to the same level.

The childhood scenes are set in a Christian school that is depicted in the standard way as heavy on the discipline and little on the education, with the exception of a moment of inspiration by history teacher Garrett Walden (Jaleel White, “Judy Moody and the Not Bummer Summer”) and a few segments showing principal Michael Akers (Thomas Lennon, “We’re the Millers”), and basketball coach Murray (Tony Hale, “Brave New Jersey”). The boys, played by William Jennings, Bryce Gheisar (“A Dog’s Purpose”), and Paul-Mikél Williams (“Westworld” TV series), are shown as prime candidates for discipline with pranks such as decorating a neighbor’s house with toilet paper, swearing in gym class, and playing war in the woods with their beloved guns.

In an embarrassingly awkward scene, Spencer and Alek’s single mothers (Jenna Fischer, “Brad’s Status” and Judy Greer, “Ant-Man”) are called to school and told by a not-too-subtle administrator that, because of their always getting into mischief and having a short attention span, the children suffer from ADHD and should be medicated. She may as well have suggested that they put a hungry piranha in the kid’s lunch box and the suggestion is dismissed quickly as is the principal’s recommendation that the boys should move in with their estranged fathers. In rote fashion, the film follows the boy’s activities after graduation. Sadler, after moving to Oregon to live with his father, enrolls in college while Spencer, after a brief sprint working for Jamba Juice, volunteers for the military along with Alek.

Reciting the powerful Prayer of St. Francis, Spencer has a strong sense that he is being guided. “Life,” he says, “is just pushing us toward something, some greater purpose,” which is both a wise insight and prophetic as events unfold. He is denied the job he wants in the Air Force, however, because of a lack of depth perception, a trait that could also be attributed to those responsible for parts of The 15:17 to Paris. The most tedious section is the traveler’s visit to famous sights on their European vacation: The Trevi Fountain and the Colosseum in Rome, the canals and Piazza San Marco in Venice, and of course the bars of Amsterdam where they let loose.

The conversation revolves around sore feet, the kind of gelato they should eat, how many selfies they can take, and other unrelatable subjects and is unfortunately less than mesmerizing. The film hits its stride, however, when the three buddies leave Amsterdam and head for Paris by train. On August 21, 2015, a man armed with an AK-47, a pistol, and a box cutter, later identified as Ayoub El-Khazzani (Ray Corasani, “Fireflies”), opens fire on the unsuspecting travelers. Even though we know how it turns out, Eastwood captures a strong sense of immediacy that keeps us riveted. Events occur in a rapid rat-a-tat-tat manner and, at that moment, as philosopher William James put it, “Reality, life, experience, concreteness, immediacy, use what word you will, exceeds our logic, overflows, and surrounds it.”

Without hesitation or second thoughts, Stone charges the shooter (a man we incidentally never learn anything about) but, when the man’s AK-47 fails to discharge, Stone tackles him and the two others aided by passengers from Britain and France help out with enough punches and rifle butts to render the attacker unconscious until the police come aboard at the next station. They also care for a wounded man who, in dramatic fashion, is kept alive until help comes.

The men display an inordinate amount of courage and, in a scene that could have become sappy but, in Eastwood’s hands, is one of understated dignity, the men are decorated with the Legion of Honor by French President Hollande and given a hero’s welcome when they return to Sacramento. It is another example of everyday people who have seized the day and transformed it. 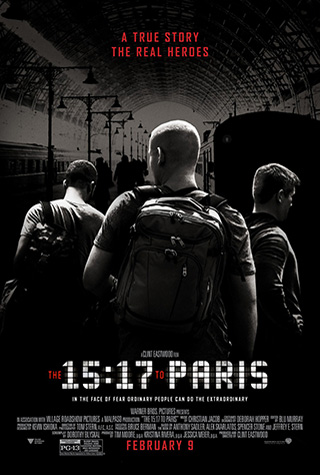