Jody Lambert has cut his teeth in the industry helming the Dennis Lambert documentary “Of All The Things” and co-writing “People Like Us” and multiple shorts for Funny or Die. Michael Dowling is a playwright who occasionally adapts his work for screen, but has never written a feature before now. Coming together with producers Taylor Williams (“Lamb”) and Jen Roskind (“Best Man Down”) on their feature debut with money raised through Kickstarter, Lambert and Dowling have created Brave New Jersey, a relatable and uniquely charming comedy. In essence, channeling the quirky oddness of humans by the way of Wes Anderson, Lambert manages to craft a hilarious and humanizing vision of an absolutely absurd time in our history when Orson Wells was so damn good at his job that he convinced millions of Americans that Martians were landing and taking over the country.

Brave New Jersey isn’t another attempt to recreate a moment in Wells’ career, but more what the impact of his talents had wrought in the small fictional town of Lullaby, New Jersey. The story is snaked together from multiple subplots including the town’s mayor (Tony Hale, “American Ultra”), a housewife (Heather Burns, “Manchester by the Sea”) and her child (Grace Kaufman, “The Last Ship” TV series), a schoolteacher (Anna Camp, “The Help”), a reverend (Dan Bakkedahl, “Hitman: Agent 47”), a reclusive war veteran (Raymond J. Barry, “The Purge: Election Year”) and numerous others in various shades of detail. As the town is convinced further, some band together to hold off the approaching hordes (others to welcome them), they all discover elements of themselves and each other that were deeply repressed and define who they are. They all approach coming to terms with who they are and what, at that time, they wanted out of their life, with varying degrees of success. All the while, reality of an impending embarrassment upon the discovery of the truth makes the film a convivial ride.

The convincing atmosphere and the vividness of the characters were not just the result of a crafty screenplay and good acting. What sells Brave New Jersey is its direction by Lambert. He proves a profound mind for a kooky visual hilarity that fosters astoundingly effective performances out of his cast and crew. Grace Kaufman presents an off-the-cuff persona that is a joy to watch and encourage as she seeks answers and understanding in the chaos. Raymond J. Barry’s begrudging and brooding interpretation is hysterical and playfully tongue-in-cheek as he leads the townsfolk into battle. The visuals designed by cinematographer Corey Walter (“Goodbye to All That”) are sharp and silky smooth in its movements and positioning, never wasting an inch in the frame to something not supporting the story or the characterization. And such a well-designed frame is only improved upon with the assembly by editor Matthew Diezel (“Once Upon a Time in Venice”). His composition is seemingly refined to the frame, echoing comedic timing on par with any Edgar Wright movie (though not as quick-paced overall).

The well-knit production team has managed a purely delightful cinematic experience with Brave New Jersey that is seldom seen in period movies about times of panic. As charming as it is endearing, the film works its way in through your curiosity and then manages to cling on even as characters become somewhat cartoonish. We want them to be because their energy and seriousness are the source of the movie’s quirk. It works as a comedy in tandem with a character study and a sociological treatise, managing a sincere depth out of preposterousness because what actually happened could very easily happen again. A strong first outing into feature narrative filmmaking, Lambert and Dowling deliver a movie that deserves every ounce of praise that it will undoubtedly earn. 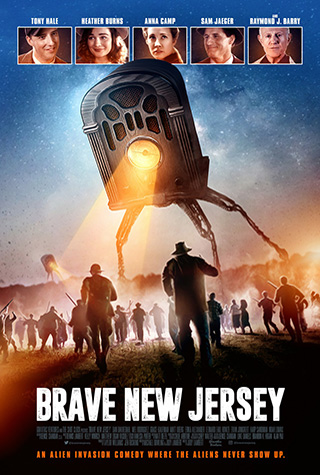