A common criticism of modern filmmaking is a lack of originality. And in a medium of formulaic genre styles that thrive on remakes, reboots, sequels and extended cinematic universes, it’s perhaps a valid point to make. Yet there is one main advantage to movies that carry a sense of familiarity — consistency. Whether it is in tone, execution of a plot or overall direction, establishing expectations can be a considerable asset for the movie-going audience.

In Nima Nourizadeh’s American Ultra, these parameters are, for better or worse, largely thrown to the wind. The end result is a self-sabotaging movie filled to the brim with ideas that can’t help but clash with each other.

We follow the character of Mike Howell (Jesse Eisenberg, “Night Moves”), a small-town man of simple concerns including drugs, his girlfriend Phoebe (Kristen Stewart, “Clouds of Sils Maria”) and . . . well, that about covers it. But little does Mike know that he is, in fact, a deadly sleeper agent created by the government in a secret project known as the Ultra program. But with the project under the control of CIA agent Adrian Yates (Topher Grace, “Interstellar”), all such agents have been ordered to be destroyed. Mike must now use his dormant abilities to protect himself and Phoebe and finally discover the truth about his past.

Sound confusing? That’s only because it is. Yet with that being said, the convoluted plot is the least of the problems plaguing this film. And that is kind of a pity because one can almost see the direction the filmmakers may have been aiming toward — a sort of Scott Pilgrim-esque variation on a spy adventure. But what could have been an interesting, stylized vision quickly falters under the weight of its own construct.

The central quality that stands as the most distracting through the 95-minute running time of American Ultra is that it can’t decide on what kind of movie it is. In one minute, we’re in an offbeat love story with Mike and Phoebe, then we’re in a wacky stoner adventure as our protagonist discovers his true potential, then we’re in a disturbingly gritty, grisly and mean-spirited action film which occasionally skirts with a vague idea that it also wants to crack a joke here and there. With so many disparate tones at play in a movie that doesn’t take much time to explain motivations or character backgrounds, there’s little else one can do besides let the nonsense ineffectually wash over them and inevitably puzzle over the vexing conundrum, “What did I just watch?”

In all fairness, the picture is not without its endearing qualities. Eisenberg and Stewart especially play off of each other quite well both in action scenes and more intimate moments. In fact, the cast at large — Connie Britton (“Me and Earl and the Dying Girl”), John Leguizamo (“Chef”), among others — delivers a range of strong performances. What’s regretful is that many of them seem to be acting in completely different films. Most of all, despite the execution being more than a little bit muddled, one has to admire the creative team for at least reaching in the direction of something original, which can sometimes be something of a rarity.

American Ultra isn’t exactly what one would call a “bad” movie. It’s hard to even say what an accurate classification for it would be. But when pushed, the most succinct qualifier might simply be “frustrating.” Yet with some genuinely interesting ideas behind it, it’s easy to picture a reality where American Ultra works. It’s just too bad we’re not living in it. 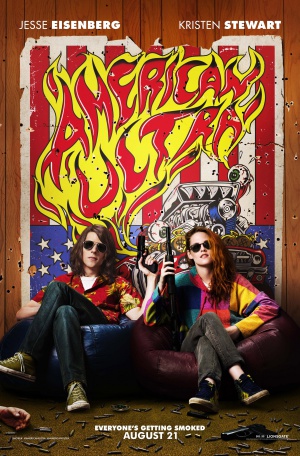