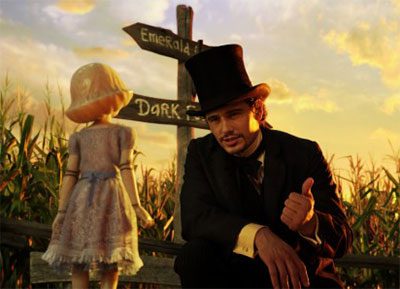 L. Frank Baum’s much loved colorful Land of Oz has recently seen a resurgence thanks to the success of the current Broadway show “Wicked.” His novels have also seen many popular film adaptations such as with “Return to Oz” in 1985 and more famously “The Wizard of Oz” back in 1939. Now in 2013, director Sam Raimi has added his latest contribution to the mixing pot in the form of the prequel Oz: The Great and Powerful.

Oz: The Great and Powerful tells the story of the man behind the mirage, Oscar Diggs (James Franco). We join him in 1905 Kansas where the charming con-artist is working as a conjurer at the Baum Family Circus. This section of the film (depicted in black and white, 4:3) serves to “conjure” up the feel of an early 1900’s movie. It’s a successful gimmick and it’s also very easy to buy into the magic of this circus as the film itself takes a step outside of the box (literally) when swirls of smoke blown by fire eaters is wafted outside of the aspect ratio into the surrounding frame.

Eventually the awe passes and the charades orchestrated by Oscar (affectionately referred to Oz, henceforth) catch up to him and in an attempt to escape the emotional trail of destruction he has caused, Oz jumps into a hot air balloon and lands himself high up in the intensely swirling winds of a wicked tornado. And just like Dorothy before him — no wait, she technically experiences this after he does — when the carnage is over and the balloon has crash landed, he opens his eyes to discover that he’s landed in the beautiful technicolor Land of Oz. At this point Raimi widens the aspect ratio and turns the color up to maximum vibrancy — Oz is not, after all, dreary Kansas.

In this fantastical fantasy world not only does Oz meet the three witches: Naïve and vulnerable Theodora (Mila Kunis), her older more savvy sister Evanora (Rachel Weisz) and their rival Glinda (Michelle Williams), but he also meets a fairytale form of all the characters he wronged on “the other side,” including a porcelain China Girl (voiced by Joey King) and a flying monkey (voiced by Zach Braff). Most of these magical beings embrace his arrival as it appears that by landing in this realm, Oz has fulfilled the good people of Oz’s prophecy that an all-powerful wizard will arrive, become the King of the Emerald City and save the land from evil. And always the opportunist (a huge amount of gold is up for grabs) Oz decides to play along. But will his role as the savior give him the opportunity to put his powers of illusion and persuasion to good use for once?

A major advantage for Raimi (over directors Victor Fleming and Walter Murch) is technology has advanced somewhat in 30+ years, giving him greater latitude when creating his wondrous land of munchkins and pixies. Audiences are treated to stunning landscapes, magnificent cities and interesting, superbly crafted inhabitants. The journey with Oz (along a yellow-brick road, incidentally), is a visually spectacular 3D theme park ride whose purpose is to overload viewers’ senses, dangerously verging on being over the top and crass.

Raimi’s tongue-in-cheek approach to film making is also as evident in Oz: The Great and Powerful as it was in some of his past films such as “The Evil Dead” and “Drag Me to Hell.” Bringing this approach to this film really gives the adults in attendance something to latch onto in what is, at its core, a children’s movie. 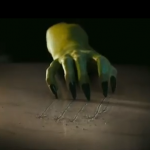 Unfortunately, however, the visuals and lightheartedness cannot fully hide the lack of substance or the stiff acting from some of the cast. Kunis rocks up in a pair of knee high boots and tight trousers but her Theodora is a bit of a wet fish throughout most of Oz: The Great and Powerful and only when betrayed does she finally begin to earn her keep (but it comes far too late). Franco comes out boring and cheeky with his laid back Oz. He doesn’t properly convey a flawed hero rising to a challenge and knowing his versatility it’s disappointing to see him not make something of what could have been a challenging role.

Weisz and Williams, on the other hand, both look to be fully vested in their roles but sadly they’re woefully underused.

These knocks, coupled with the inescapable fact that wonderment is lost due to Oz being nothing more than a common con-artist, keep Oz: The Great and Powerful from reaching its true potential. Visually it’s there (everyone involved with production design, effects and cinematography deserve accolades), but as we all know looks aren’t everything. 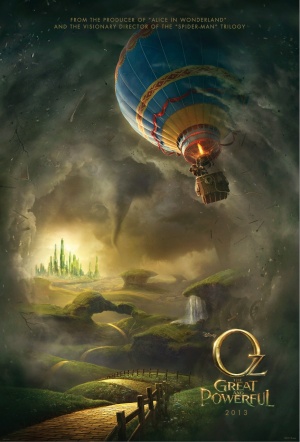