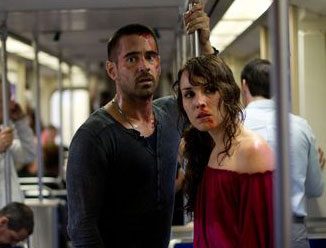 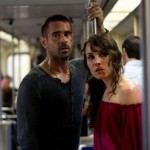 With more than a passing nod to revenge action films like “The Driver” and “Shooter,” director Niels Arden Oplev (“The Girl with the Dragon Tattoo,” original 2009 Swedish-language version) has certainly crafted a gloomy, gritty, violent crime thriller, with some spot-on acting performances, but with a confusing, convoluted plot and a filmed at a deliberate (some might say “snail’s”) pace, Dead Man Down comes up woefully short of even the best of intentions. It tries to be an artsy, thinking man’s movie, as well, but the problem is it may be too artsy for the mainstream audience it is trying to attract and ultimately gets weighted down by its own self-importance.

Add to the fact the movie takes place in New York and is filled with Albanian, Hungarian, Irish, French, African-American, British, Jamaican and Northern European actors (the Big Apple TRULY is a melting pot), is filmed during either near and/or total darkness, rainstorms and other dreary atmospheric conditions and features a script that — while smart and snappy at times — eventually comes to a grinding halt due to its own pretension and ultimate preposterousness.

Here, Colin Farrell (“Seven Psychopaths“) is Victor, a mysterious sort who could either be a) be a common gang member, b) be infiltrating a rival organization, c) be a police informant ratting out a drug lair, or d) just an ordinary person caught up in circumstances beyond his control. Whatever, I will let the viewer figure it out for themselves (just like I had to. . .). Victor also seems not to have to worry about money, however, and has dozens of high-tech, high-powered weapons and sophisticated recording devices at his disposal.

In an early firefight with a Jamaican gang, Victor saves the life of his boss, Alphonse (Terrence Howard, “Red Tails“), who is not only into illegal narcotics, but seems to be a real estate magnate, as well. The death of one of Alphonse’s lieutenants (found in a freezer) causes him to assume this rival gang was responsible, the first of many plot twists and complications.

One of which is Victor’s French neighbor, Beatrice (Noomi Rapace, “Prometheus“). She keeps staring at Victor from her apartment window and lives with her deaf and slightly loopy mother (Isabelle Huppert, “Amour“). When they finally hook up, Beatrice confesses she only did so because she filmed Victor killing a guy and now wants him to ice a drunk driver who “destroyed her life” and messed up her once-beautiful face (it’s really not that bad, folks, believe me).

Local kids call her “monster” (for SOME reason, but it’s just a few scars — again, it doesn’t look that bad), so she figures Victor can do the job — or else she will tell the police he committed the other murder. Dead Man Down begins to get even more confounding from here, with assassination attempts, secret meetings with F. Murray Abraham (Academy Award winner for “Amadeus“), the wiring of a warehouse with explosives, some intrepid detective work by a low-level goon, Darcy (Dominic Cooper, “Abraham Lincoln: Vampire Killer“), and the fact Victor has a captive tied up in the bowels of a rusting hulk ship anchored in the Erie Canal.

By filming more wind and rain storms, Oplev attempts to make sense of the entire enterprise, but with so many loose plotlines flying about and ever-increasing gaps in the story (as well as most of the conversations), it becomes more and more difficult to follow along, let along stay awake during the proceedings. Even a few well-meaning gunfights and scattered explosions cannot keep viewers too interested in what’s going on. 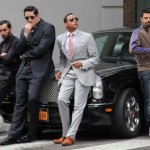 To be fair, Farrell and Rapace do well with the maze of a script (by J.H. Wyman, “The Mexican“), and while they do not have much in the chemistry department — and we can’t really see them together — they do the best they can. Another decent effort is pulled off by Cooper, whose Darcy is fairly ignorant, but is proud of the clues he happens to stumble upon. Huppert is the only real comic relief in Dead Man Down — and she’s really not that funny.

I wish I could write more positively about Howard, who was nominated for a Best Actor Oscar for “Hustle & Flow,” and has some good work to his credit. Mostly here, though, he reacts to events going on around him. He does get a chance to shine in one particular scene, when we think he has trapped and figured out Victor, but it ends abruptly and we’re left even more puzzled by the situation.

Overall, a decent concept comes apart long before the somewhat slam-bang conclusion. The wheels begin falling off and the runaway train of half-hatched plot twist and contrivances finally forced this critic — who really WANTED to like Dead Man Down — to throw his hands up and declare this arthouse effort meets action/thriller a clear “no decision.” 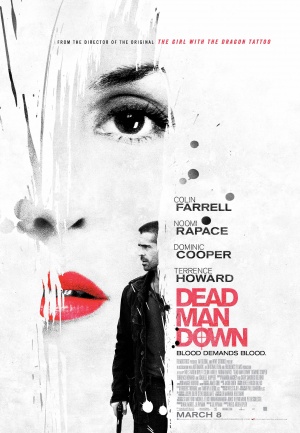