The film Trolls opened several weeks ago and this review is a bit late, but it should not matter, as few people will see or care much for this lukewarm knockoff of the Smurfs franchise (which is a lukewarm entity in and of itself). The Rotten Tomatoes synopsis reads: “DreamWorks Animation’s ‘TROLLS’ is an irreverent comedy extravaganza with incredible music. From the genius creators of ‘SHREK.’” Well, the “genius” of “Shrek” lasted through just two films and the “genius” of Trolls does not even extend to one. It may be “irreverent” to some, but to this reviewer, “irrelevant” is the more apt description.

Based on those ugly toys that resemble a cross between a Kewpie Doll and Yahoo Serious, which in turn is based upon the class of beings dreamt up in Scandinavian folklore. In Old Norse sources, these beings described as trolls dwell in isolated rocks, mountains, or caves, live together in small family units, and are rarely helpful to human beings. This lack of assistance to humans can be doubly said of this animated film, which is loud, bright and colorful, but like a handful of jelly beans, contains no nutritional value and as a movie, is almost completely forgotten upon leaving the theater.

Let’s begin, like the Rotten Tomatoes synopsis does, with the “incredible” music aspect. Yes, the film does contain some classic hit songs, such as “Hello,” “True Colors,” “I’m Coming Out,” “September” and “The Sound of Silence,” among others, but none of these are sung by the ORIGINAL artists, just some lame cover groups and individuals such as former NSYNC vocalist Justin Timberlake (voice of Branch Troll, “Inside Llewyn Davis”), Anna Kendrick (voice of Princess Poppy Troll, “Get a Job”), Zooey Deschanel (voice of Bridget Bergen, “Rock the Kasbah”) and former No Doubt lead vocalist Gwen Stefani (voice of DJ Suki, “The Voice” TV series).

Okay, now that we’ve introduced most of the main characters, let’s get to the threadbare plot that we’ve seen in a dozen or so similar animated efforts which feature the tiny and cute protagonists being threatened by the larger, uglier antagonists. Here, the sweet little Trolls live in a perfect land where troubles are non-existent and they sing, dance and hug all day (each possessing a clock alarm that aggressively reminds them of such activity). Discovered, however, by the big and homely Bergens — think a race of Miss Piggys after a nuclear accident — they soon become “happy meals” for the sullen creatures. On the very Troll Day that Prince Gristle Bergen (voice of Christopher Mintz-Plasse, “Kick-Ass 2”) gets to try one of these delicacies, however, they all escape, leaving longtime Chef Bergen (Christine Baranski, “Into the Woods”) holding the bag.

I’m probably going into much more plot detail than this picture deserves, but I will continue.

Meanwhile, after two decades of peace (but certainly not quiet), the Smurfs, I mean Trolls, figure they are safe enough to begin a huge anniversary celebration by singing poorly-conceived rap songs and firing off noisy pyrotechnics. One sullen member of the community, though, is Branch, who disagrees with this lifestyle and is subsequently treated like a Donald Trump supporter on “The View.” As he hides away, he warns that the Bergens will find them because of their endless revelry, the fun-but-stupid group fires off a hydrogen bomb-type device anyway, which of course, alerts Chef to their location. All are then captured and prepared for a new advent of Troll Day festivities.

Since Princess Poppy is the only one in the village to survive the onslaught, we know she and Branch will have to team up to rescue the other dopey members of the troupe. Here, Branch reveals just WHY he isn’t pathologically giddy and there is also a subplot of a scullery maid, Bridget, falling in love with the now King Gristle, but at this point, who cares? Other than entertaining a few distracted three to four-year olds — who will laugh at Trolls crapping cupcakes — the film was made mostly to sell toys. When I saw just how many of these adorable little trinkets were available at several local outlets, as well as on the Internet (with items ranging from $19.88 to $64.99 and upwards), I could only shake my head in disgust.

It’s a savvy merchandising campaign as well as a sad commentary, but then again, it seems the way of many such Hollywood projects today where such juvenile fare appears on boxes of fast food kid cuisine even before the movie bows. As for this picture, it’s sure to be enough for at least one sequel, but the familiar animation (don’t look for anything new here, just a garish rehash of DreamWorks other, better productions) and the bland script (some such efforts are made for children, but toss a few jokes and messages our way; this one doesn’t) will place Trolls firmly in the overflowing kettle of recent mediocre animated features made for children (including “Storks,” “Ratchet & Clank,” “The Secret Life of Pets,” and “Sing,” among others, that shows no sign of ceasing to flood the market in the near future. 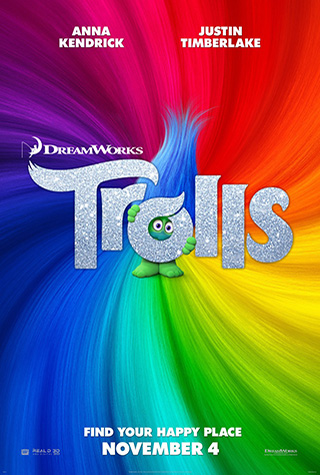