The cerebral time-travel thriller Counter Clockwise is quite a piece of work, with a punchy script and tight editing and direction, all set to an eerie score. If you enjoyed Shane Carruth’s “Primer,” take a gander at this one — it has all of the intriguing metaphysical concepts, but is a little easier to follow.

Brilliant scientist Ethan (Michael Kopelow, “Stalking LeVar” TV series) and his partner Ceil (Alice Rietveld, “The Night Stalker”) are former employees at a tech firm who have struck out on their own and are trying to create a teleportation device. They place their dog Charlie on one of the teleportation pods, initiate the sequence, and watch the pup disappear . . . and not reappear on the other pod. Curious — and more than a little upset about Charlie — Ethan clambers onto the pod himself and teleports.

When he, uh, appears, he can immediately tell that something’s amiss. The lab looks like a disaster area. Ethan has inadvertently zapped himself to six months in the future. Though it takes him a little while to figure that part out; the main clue for him is when he learns that he is wanted for the murders of his wife and his sister. Hey, the police even have a picture of Ethan emerging from the crime scene while covered in blood!

Now, if this were you, dear reader, what would you do? You’d get back to your lab and go back in time so you can prevent this terrible future. But first Ethan needs to figure out how he made it into the future to begin with, then get to his well-guarded lab, then make sure nothing else changes in his trip back in time. Which, as we all know from “Back to the Future” and its sequels, is nearly impossible. You know how a butterfly flapping its teeny tiny wings can cause a calamity on the other side of the world? Same principle applies to time travel (were it really a thing). Ethan can’t just have a do-over; he has to find out what precipitated his apparent murderous act. And in the investigative process, he introduces variables that oh-so-slightly alter the circumstances.

Counter Clockwise is a movie that must be watched closely. Writer-director George Moïse and writer-star Kopelow take exceedingly good care in crafting a multilayered story. One of the coolest aspects about time travel is that one can experience multiple perspectives of the same situation . . . from the same character. And to that end, Counter Clockwise is exceptionally well told. And although the acting is uniformly good, the success of the film rests on the broad shoulders of Michael Kopelow, whose Ethan is (too) smart (for his own good) and clever, although how he’s married to a knockout like Tiffany (Devon Ogden, “Lazarus Rising”) is a bit of a mystery. In any event, it’s also the sort of movie that bears rewatching, as certain clues will become evident on further viewings. 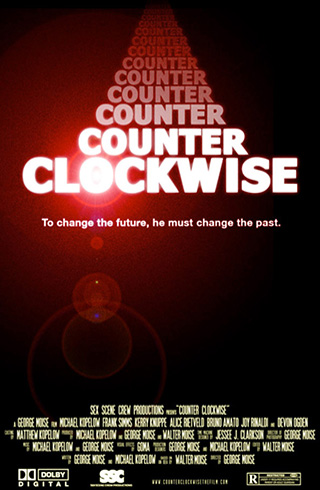