Oppression and fear stalk the environs of Babak Anvari’s superb Under the Shadow. Based on Anvari’s childhood experiences in Tehran during the Iran-Iraq War, Under the Shadow brings subjugation, menace and a palatable sense of dread to the screen, with a political element that is constant but never overbearing. The film’s focus is domestic, portraying the experiences of Shideh (Narges Rashidi, “Speed Racer”) a former medical student caring for her young daughter Dorsa (Avin Manshadi). Shideh’s husband Iraj (Bobby Naderi, “Targeting”) is away at the front, and despite his urging that Shideh take Dorsa away from the city to stay with his parents, Shideh resolves to remain in the family apartment. Iraqi offensives lead to sheltering in the cellar, and then the worry and paranoia increase as something otherworldly begins to haunt the apartment block, steadily consuming daughter and mother with frost-fingered fear.

Generically, Under the Shadow is part Gothic chiller and part homefront war film, sometimes playing like a combination of “The Babadook” or “The Devil’s Backbone” and any number of British Blitz films. What will set it apart for a Western audience is the added dimension of Iranian society, the Shia Islamic laws weighing heavily on Shideh but only explicated in a couple of scenes. The opening sequence sets the tone well, as Shideh, dressed in a hijab that covers all but her face and hands, requests re-enrollment in her medical studies. Her application is denied because of her past involvement in radical political groups, but the delivery of this denial from a be-suited male official gives the scene a strong gender inflection. In the distance through the window, a plume of smoke from an Iraq attack foreshadows the bombardments that pepper the film.

The gender restrictions appear throughout the film, as Shideh repeatedly transgresses Iranian guidelines for women. These transgressions lead to threats of lashes and other reprisals, while Iraj is far from supportive, even suggesting that she may be better off at home. Yet these moments stand out as most of the film is confined to the family apartment, Shideh and Dorsa alone apart from occasional visits from neighbors. When an Iraqi missile strikes the building, the fear escalates in such a way that could bring the inhabitants closer together, but instead the apprehension of further salvos steadily drives people away, as does the sense of something supernatural. As a result, Shideh and Dorsa become increasingly isolated and agitated.

The sense of creeping malevolence grows as the film progresses, Anvari exercising restraint and atmosphere over shocks or gore. Nasser Zoubi’s production design gives the apartment block a dour, functional look, the immense bulk of the unexploded missile a visual distortion as well as a narrative and psychological intrusion. Director of photography Kit Fraser lenses the film in unfussy shades, suggesting both natural illumination and the flat electrical light of the apartment, which means that when strange things happens, they possess an uncanny air, both familiar and unfamiliar, making them all the more unsettling. Dorsa describes another lady that visits their apartment who Shideh cannot see, neighbor Mrs. Ebrahimi (Aram Ghasemy, “The Pear Tree”) refers to evil Djinn spirits as described in the Qur’an, Dorsa’s doll goes missing and Dorsa develops a persistent fever. Strange and unsettling events steadily escalate, which Shideh opposes through rationality and scientific knowledge. But increasingly, her resolve and belief in a rational world is shaken and she starts to believe that something inexplicable is happening, while her relationship with Dorsa deteriorates. In several heartbreaking sequences, mother and daughter fight over their interpretations of events, both equally indignant and self-righteous. This ensures that the horror of the film is not simply a matter of external threats but also internal resentments and tensions, tensions that bubble out with as much power as the malign forces that inhabit the apartment block.

As the film progresses, the unraveling Shideh suffers nightmares and visions that match the logic of dreams — objects and people change without explanation, locations shift abruptly, there are more terrifying intrusions much like the missile. Anvari plays with the viewer’s sense of stability much as the film does with Shideh’s — a repeated shot rotates through 90-degrees as Shideh rises from her bed; we share her point of view through the peephole in her door to catch a fleeting glimpse of something; major shocks are presented from her perspective so that we jump with her. The film has several big scares that are likely to jolt the viewer out of their seat, yet it never becomes an all-out screamathon, Anvari’s tight grip on the events and atmosphere never wavering even as our characters become ever more hysterical.

On a purely visceral level, Under the Shadow is a gripping and chilling horror film, with a measured pace that steadily drip feeds the terror. It is also an engaging and moving portrait of family life, due both to Anvari’s sensitive script and the two central actors who create a convincing relationship that is clearly loving yet also fraught. Historically, it effectively conveys a sense of living in a warzone, opening supertext informing the viewer that the Iran-Iraq War was the longest conventional war of the 20th century. Politically, it expresses the oppression of women under an authoritarian patriarchy, with further aspects of subjugation appearing throughout the film. It is a remarkable first film for this director that is definitely worth seeking out, and will hopefully gather enough success for Anvari to build on this very promising beginning. 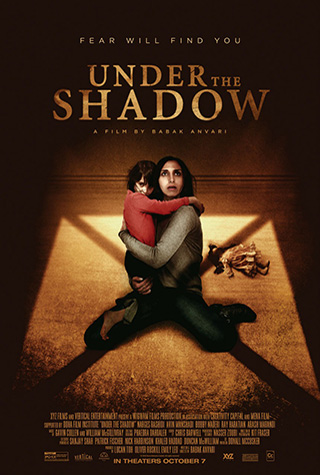