As the ragged and haggard anti-hero in Jean-François Richet’s rollicking grind-house showcase Blood Father, lead character John Link is a lost wrecking ball in search of raging redemption despite whatever erratic and intrinsic demons that beleaguered his unstable psyche. Well, this description can also be applied to the relentlessly problematic performer playing this graying, leather-skinned motorcycle misfit Link: The maligned Mel Gibson. Gibson, blackballed for his real-life public meltdowns, chronic alcoholism, ugly-minded and acid-tongued racial tirades, and high-profile deteriorating intimate relationships was certainly destined to wallow in everlasting shaming obscurity. Indeed, Gibson is not the first Hollywood hotshot to be taken down a few notches in the wake of his off-screen controversies and he certainly will not be the last. Nevertheless, fallen stars in Tinseltown somehow manage to shine bright again given the right golden opportunity to do so (just ask the likes of Robert Downey Jr., Arnold Schwarzenegger, Mickey Rourke, Hugh Grant, etc.). Their “rehab” methods for getting back on track is rather straight-forward: Return to glory with the reputation, talent and tenacity on the big screen that made them marketable cinematic icons in the first place. Thankfully, Blood Father may be the cinematic saving grace for Gibson to compensate for all the media-oriented madness he spewed throughout these tedious years.

Forging a comeback of sorts was not an easy task for Gibson. In fact, being the butt of previous late night fodder and the fingered pariah of some influential movie studios (as well as his legions of disillusioned fans) spelled instant doom for the once heralded sex symbol and unhinged box office action star. Fortunately, Gibson still had his handful of devoted industry supporters, empathetic backers and box office admirers. For instance, Gibson close friend, apologist and “Maverick” co-star Jodie Foster proudly stuck her neck out and cast him as a delusional family man losing his sense of reality during the aftermath of his bad publicity in the criminally underrated 2011 project “The Beaver” to much critical indifference and ridicule. Richet (“Assault on Precinct 13,” the “Mesrine” movies) gets considerable mileage out of the aging Gibson who plays yet another flawed father whose insanity is inflamed to the point of no return. Similarly, Blood Father demonstrates the familiar theme from the “Taken” film franchise that not only resurrected Liam Neeson’s stillborn film career, but helped profitably shape the maturing fatherly revenge thriller genre that proved receptive to finicky movie audiences. Perhaps one could think of Blood Father as a blunt, blue-collar dusty trail version of the aforementioned “Taken” movie enterprise.

The film, based on co-screenwriter Peter Craig’s 2005 novel of the same name, has Gibson’s ex-con Link living on the outskirts of a Californian desert in a shackled existence. Sporting a grizzled look highlighted by a hardened grayish hairy face, Link is desperately trying to stay clean as he is determined to eek out a living as a tattoo artist. Of course Link’s affiliation with notorious biker gangs — both past and present — not to mention his prior prison ties makes him an unpredictable loose cannon to tangle with at any given moment. The only close associate that Link relies on for guidance and companionship is neighboring AA sponsor Kirby Curtis (William H. Macy, “Room”).

However, Link is forced to revisit his fatherhood role when long-lost daughter Lydia (Erin Moriarty, “The Watch”) shows up out of nowhere in a state of turmoil. Specifically, ominous characters (read: Sinister drug dealers) are on Erin’s trail and it is up to the beleaguered Link to protect his pretty child from the murderous riff raff that look to eradicate the endangered young woman. The teenaged Erin, it turns out, rubbed her bad boy boyfriend Jonah (Diego Luna, “Elysium”) the wrong way through rejection. This is not a particularly smart move since Jonah hails from nefarious stock involving his Mexican drug cartel family connections. So Erin’s on-the-run exploits not only angered the dastardly Jonah and his corruptible cohorts, but now forces Link to reach out to the dark side and return to the mayhem of his sordid histrionics to protect his estranged daughter.

Astutely, Richet maintains a decent balance of kinetic pacing and profiling his wayward characterizations with seedy depth and despair. Gibson is stellar as the vitriolic vessel strong-armed into navigating through rough waters all in the name of potent ambivalence. There is a certain down-and-dirty swagger that fuels the broken base of Link’s personalized fury. One could easily attribute this same observation for Gibson himself — a complex man stuck in his off-balance boundaries of collapse, confusion and chaos. Richet’s bombastic B-movie odyssey into self-examination and more so self-destruction arms Blood Father with an escapist grittiness that feels understated in its underground rawness. It is refreshing to see the deceptive polish and gloss from Gibson’s younger “Lethal Weapon” male sexpot psycho Martin Riggs morph into a cynical, senior citizen-style Mad Max on biker wheels with vulnerable heft attached. If any vehicle captures the tormented and tainted soul of former Hollywood heavyweight Mel Gibson then Blood Father is certainly it.

The supporting players assist in elevating Gibson’s/Link’s angst-ridden twitches and motivation. Moriarty’s Erin is convincing as the jeopardized daughter-in-distress turning to damaged Daddy Dearest for safety and salvation. Luna is exceptional as the jilted low-life gangster looking to strike back at his self-described moll-on-the-move Erin. Michael Parks (“Argo”) is disturbing yet engrossing as the racist radical merchandising honcho, Preacher, that crosses paths with his detached old pal Link. And Macy is solidly reliable as the nebbish and off-kilter hanger-on Kirby. Scribers Craig (“The Town”) and Andrea Berloff (“Straight Outta Compton”) concoct an adventurous script with compelling cohesiveness in a solemn revenge-seeking actioner that is uncharacteristically moving and thought-provoking. Sure, the film has its share of scattered clichés that befall a jumpy road flick — hyperactive choppers, shady personalities that come-and-go, spacious rocky landscapes, despicable baddies and yes . . . that overused word known as redemption. Still, one cannot deny the reflective and raucous vibes that emanate from rag-tag pulpy Blood Father.

No doubt that Mel Gibson fell off course (and out of favor) as a misguided man trying to resolve the shifty shadows of his homemade debauchery from days gone by. With more screening returns to promising and respectable fare such as the shrewd and contemplative Blood Father, maybe the skeptical masses can start embracing the perplexing performer again. The polarizing Gibson shows no signs of transparency in front of the camera as this sturdy introspective action flick suggests. Hopefully, he can keep his off-screen controversies transparent though, should he want the labeling of being cinema’s “Comeback Kid” to stick and salvage what remains of his legacy. 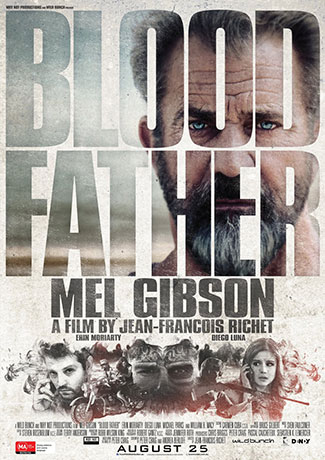